Esteban Cortazar’s pairing of Berlin nights and gymnastic inspiration made for a stirring, if unlikely, combination. 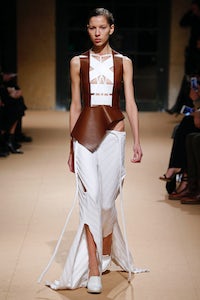 Esteban Cortazar’s pairing of Berlin nights and gymnastic inspiration made for a stirring, if unlikely, combination.

PARIS, France — There is a playful sense of conviction that runs through Colombian designer Esteban Cortazar’s work. He exhibits the kind of no-holds-barred freedom of a young designer equipped with creative vision, confidence and the resources to express both.

To that effect, his latest collection veered in unlikely stylistic directions, compounding an exotic slew of fabrications into sensual, curvilinear silhouettes that told a glamorous story of Berlin nights paired with the gymnastic inspiration of the pommel horse and the jockstrap.

Without a trip to the Berghain nightclub on their Berlin agenda, there is little chance that Cortazar’s polished clientele will ever relate to the latter reference, however it made for a stirring combination of panelled leather blousons and cage tops bonded with velvet or held together by networks of golden rivets and suspended threads. Jewellery details nuanced a handful of pieces with even more cocktail clout, as did the cluster of rainbow crystal wedged in the heel of chunky sandals and pumps.

Elsewhere, elasticated tops were bound corset-like beneath wide chenille trousers or split rib knit skirts and those rivets returned on intricate coats and bright jackets in fuzzy felt (he called one shade ‘Lil’ Kim pink’) that unravelled at the sleeves or came framed with the giant pouf of a Mongolian lamb-trimmed hood. That shaggy fur reappeared as a canary yellow puffed shoulder on an otherwise elegant leather blazer and hung off jersey dresses as a lumpy trim undermining the collection’s strong focus on sinuous athletic shapes and sculptured evening wear, ideas exemplified in the pair of two-tone dresses with white ruffled hems that materialised midway.

They certainly trumped the shimmering Atelier Swarovski stingray textile that he cut as shorts and trousers (despite its glittering effect, the pieces scraped along the runway with the grating sound of sandpaper). The frilled pieces feel somewhat signature to the designer now, and evolving them as a brand hallmark will ensure Cortazar’s flair for drama continues to win the designer the merit he deserves. 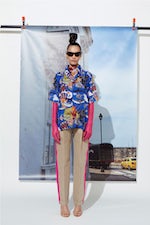 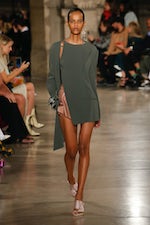 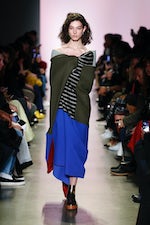 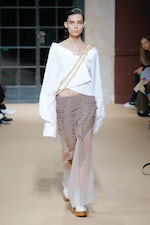