The embellished femininity of Jason Wu's namesake label surfaced at the minimalist Boss in a swirling ode to the curves of a lady. 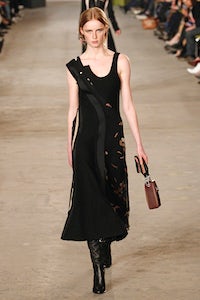 The embellished femininity of Jason Wu's namesake label surfaced at the minimalist Boss in a swirling ode to the curves of a lady.

NEW YORK, United States — Jason Wu is a designer who thrives on old world glamour, a fact that has nuanced his proposition for the house of Hugo Boss ever since his appointment in 2013. Considering the embellished femininity that informs the uptown oeuvre of his namesake label, it’s not surprising that some of that sparkle has become ingrained in the minimalist garb of Boss, a true bastion of German minimalism. Five seasons in, it surfaced in a swirling ode to the curves of a lady, dusted lightly with appliqué florals and liberally with collaged, contoured dresses that hit the leg mid-calf without fail.

To be fair, this reporter spotted a trio of slouchy wool trousers amongst the collection’s myriad frocks, yet the focus was clear. A study on intricately spliced panelling was the order of the day, rendered in felt, cashmere, silk crèpe and leather that created softly fitted shift dresses, fluted skirts and long peplum tops. The hips and waist were shaped gently in all instances, creating a demure hourglass figure that ran throughout the collection, whether cut from strips of forest green satin or shrouded by the opulent feel of persimmon-coloured cashmere overcoats.

Athleticism remained a relevant, secondary concern as zippered mock-neck sweaters became an ideal layering item below cross-body coats (or came built into Wu’s latest version of an LBD). However it was the graphic motif of needle-punched felt trims and bicolour, ruffled separates that outlined the austere, ladylike message — one that felt overtly repetitive in its execution, narrowing the show’s scope to its detriment.

When she slips into that swingy silhouette, perhaps paired with one of the season’s structured saddlebags or a snub-toed ankle boot, there will be little fear of Wu’s Boss woman erring on the wrong side of propriety — even if she opts for one of his chiffon-striped mesh numbers (a raw evolution of his eveningwear prowess that paid off). Try candy pink, if you dare. 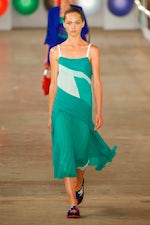 At Boss, Playing the Colour Card 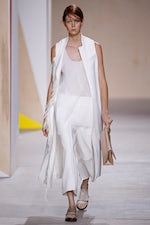 Precision in Soft Focus at Boss