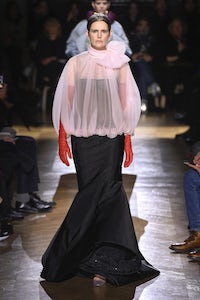 PARIS, France — “All that we see or seem is but a dream within a dream.” Edgar Allen Poe’s words were handwritten on Pierpaolo Piccioli’s mood board. Dreams were on his mind. The way they expressed the unconscious, the hidden, struck him as similar to the creation of haute couture. “You don’t really see that process,” he mused. “The mystery is not solved, just uncovered.”

Piccioli is right. When he moved the needle on couture with his collection for Spring 2018, he spotlit one of fashion’s fundamental mysteries: how can clothes have the power to thrill us, move us so? The colours, the silhouettes, the drama of that show have reverberated ever since, like fashion’s Big Bang. And the reverberations have been particularly strong for Piccioli himself. He’s turned into a Pied Piper of couture, an inspiration to others.

But comes the time to move on, and that’s what he did on Wednesday. Valentino looked different. It was as simple as a shift in silhouette, towards something narrow, more fitted, with a flaring hem (the siren — also known as the mermaid dress). It was as complex as a bold graphic element, often using the red that was once a Valentino signature.

The centrepoint of the show was Hannelore Knuts, wearing a chiffon and organza gown in a red that was almost as startling as her huge coral head-dress. During his research, Piccioli came across photos of a show that Valentino staged on Capri in 1967. He tracked down the photographer, Paolo di Paolo, now 94, who agreed to come out of retirement to shoot Wednesday’s show. “Everyone knew the dress with the coral design from the archives, but no one had ever seen the coral head-dress,” he said. “There was no record of it.” No one even knows if real coral was used. Obviously Piccioli’s was a simulacrum.

That moment more than half a century ago seemed to have captured the designer’s imagination. Guido Palau contributed hairstyles that echoed Marella Agnelli and Babe Paley. The siren silhouette that dominated the collection had all the va-va-voom of a bygone glamour. They were what Piccioli might have been talking about when he mentioned “the memory of couture” (he was actually referring to the polka dots on another dress). But there was another such memory — of Roman couturier Roberto Capucci — in an architectural detail that the run of show referred to as “volants,” wings or folds of fabric that stood out from the body. The general impression was a stiffness that felt less modern than the sensuous fluidity of the designs with which Piccioli seduced the world two years ago. But change is change.

Karl Lagerfeld often said he dreamed his dresses. He’d wake up and dash off a whole collection before the memory faded. Piccioli said that had never happened to him. “I dream sensations.” The collection he showed on Wednesday was assuredly sensational, with a last shot of Adut Akech rising from a fan of pink feathers to seal the deal. But there is a difference between sensation and emotion, and that might have been the biggest change of all this time.