The collection was an exquisite blend of streamlined, sculptural shapes and rococo flourishes. 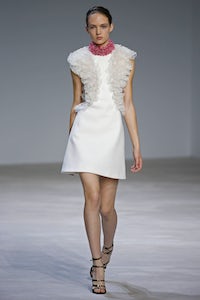 The collection was an exquisite blend of streamlined, sculptural shapes and rococo flourishes.

PARIS, France — It’s been ten years since Giambattista Valli launched his eponymous brand and almost five since he ventured into haute couture. His feelings towards the city of Paris, where his creativity bloomed and his label flourished, are full of enormous gratitude. "The art of luxury — and with that couture — was born in Paris, ignited by an Austrian transplant: Marie Antoinette,” said the Rome-born designer who has made the French capital his adopted home. “The city is wounded now, so I though it was my turn to help celebrate its timeless beauty."

Marie Antoinette's name was not dropped in vain: Valli’s couture collection was an exquisite blend of streamlined, sculptural shapes and rococo flourishes. There were flowers everywhere: as precious, delicate embroideries; as tactile appliqué; turned into vibrant clusters of ruffles. "Flowers are my obsession,” added Valli. “I was inspired by Paris' enchanting gardens — the one in the Tuileries, the one in the Palais Royal, the Jardin de Bagatelle and the Jardin du Luxembourg."

But this was flowers seen from a new, graphic angle, whilst relying on the highest couture techniques. In a day of lukewarm shows and fast couture that looked like faster ready-to-wear, Valli sounded like a savior: a herald of true workmanship. And his beautiful collection offered proof. Sometimes is got a bit too decorative, though. Valli is at his best when he opts for restraint. A fluid Paolina Bonaparte column dress was the stunner. 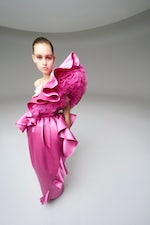 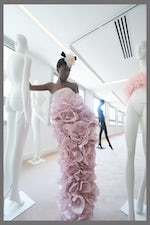 Giambattista Valli: A Man of Extremes 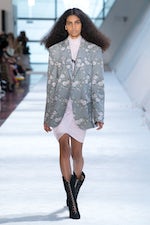 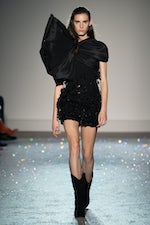