At Versace, Aspiration and Uplift

Donatella Versace is doing the thing she knows best: masterminding collections of clothing that embody aspiration and uplift. 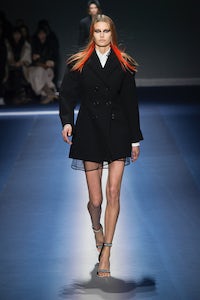 At Versace, Aspiration and Uplift

Donatella Versace is doing the thing she knows best: masterminding collections of clothing that embody aspiration and uplift.

MILAN, Italy — If you knew Donatella like I know Donatella… the way she’s changed, the confidence, the enthusiasm, the happiness. She could be writing inspirational self-help books about how to turn your life around. That’s the customary route the newly enlightened take to merchandise their well-being.

Instead, Versace’s doing the thing she knows best: masterminding collections of clothing that embody aspiration and uplift. She acknowledges what she does is high fashion, which exists at a distance from quotidian concerns. Still, there’s a message in Versace’s designs that makes a fundamental connection. That’s if people can see beyond the ice queen of the red carpet shtick that enabled her during her times of trouble. Long gone, but preconceptions have a way of lingering.

So it was a smart idea for Versace to sloganeer with her latest collection. Shelve the subtlety, go for the main vein. She greeted her public in a tube dress that proclaimed EQUALITY down one sleeve. UNITY, POWER, LOYALTY, COURAGE… this was the vocabulary of empowerment that insinuated its way into the clothing.

“Strength”, for instance, was emblazoned on a huge puffa that looked like a physical embodiment of don’t-fuck-with-me fierceness. Guido Palau and Pat McGrath’s hair and makeup amplified that idea to an almost Gothic degree, reflecting, they insisted, the independence and individuality of the young models they see in their day jobs. There’s another word that has cropped up through the season — COMMUNITY. The sense of it was strong here, to the point of intense tribalism.

Over and again, hindsight has shown how the glass of fashion mirrors the moment, even though there will always be sceptics who heap scorn on the very idea. There was enough in this collection to suggest that a woman dressing women can take on a new kind of weight in the current climate — especially when that woman was a fired-up Donatella Versace. Starting with the practicality: does the name Versace say “daywear” to you? It could. Maybe it should with the serious tailored jackets, pants and coats that anchored the presentation. Knitwear? Plenty of that too.

Then there were the Versace-isms. Binx Walton’s sober sheath, corrupted by a spiral of sheer? Fierce! Adwoa Aboah’s one-shouldered drape of techno-gingham? Fiercer! It could have been something as basic as a new breed of model owning Versace, except that Amber Valletta closed the show, draped in crystal mesh, with all the hauteur of the house once upon a time, and you were reminded that it’s always been that way under the sign of the Medusa: a woman who was, is and always will be a law unto herself.