There was something subtly political about what Donatella Versace presented, her version of an antidote to toxic masculinity. 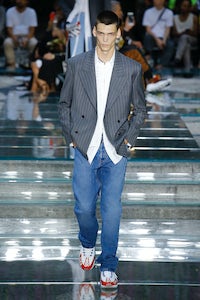 There was something subtly political about what Donatella Versace presented, her version of an antidote to toxic masculinity.

MILAN, Italy — “Beauty on its own is boring,” said Donatella Versace as she readied herself for her latest show. You can’t imagine her saying something like that ten years ago. Everything’s changed, though maybe the notes from a Versace menswear show at that time would have said the same things they did today, talking about masculine sensuality and “a businessman meeting his inner rock star."

But, again, everything’s changed. Then, the Versace man was an Olympian fallen to earth. Now? “Emotions are more important than abs,” said Donatella, in the most t-shirt-ready declaration of Milan’s menswear weekend. “I want to talk to many different people, talk about vulnerability, create a conversation.” That’s why it was more important than ever for her to have women join her male models on the catwalk. “I want them talking to each other.”

Such conversation as there was, was mostly conceptual, in the sense that fabrics – denim, faux python, floral prints, PVC – were shared between the mens- and womenswear. The primary graphic of the collection borrowed from tabloids, “a conversation with no filters," Donatella called them. VERSACE FINALLY SPEAKS OUT, screamed the headline.

And there was something subtly political in what she had to say, especially in the light of Italy's new populist coalition government, sworn in three months after an inconclusive election. If toxic masculinity is the virus infecting global politics, its antidote is obvious, at least as it was expressed in the new Versace collection. Empathy, tenderness, vulnerability…if once Gianni Versace’s man was the apogee of physical perfection, his sister courted imperfection. An incongruous ruffle here, some bricolage there, a classic pinstripe served dishevelled... “This man doesn’t care if something’s not right,” Donatella said. Because there are more important issues to which he can apply himself.

OK, so maybe it wasn't exactly one step away from manning the barricades, but taking this collection as another indication of the confidence and conviction that Donatella has settled on after her own personal travails, there was cause for celebration. Her soundtrack came from FAKA, two queer artists from Johannesburg. It was their first fashion show. And it was some kind of first for Donatella too.