The strength of Donatella’s new work is the way she embraces it, with love and fearlessness and the same dry wit with which she deals with all the tricky propositions in her life. 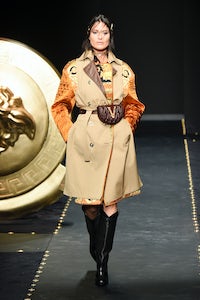 The strength of Donatella’s new work is the way she embraces it, with love and fearlessness and the same dry wit with which she deals with all the tricky propositions in her life.

MILAN, Italy —  You know the expression, “Go big, or go home”? And that other one: “You can’t go home again”? Donatella Versace is the kind of woman who wants it all. On Friday, she went big AND went home. Going back to her roots, and blowing them skyhigh. As skyhigh as the gigantic safety pin that dominated her catwalk. (The invitation was a box of safety pins.) How good did THAT look when DV posed in front of it? “We’re living on Instagram,” she murmured during a press preview earlier in the day.

Social media-savvy she may be, but Donatella is also a faithful believer in the physicality of fashion. Meaning, the show’s the thing. Frederic Sanchez, back in the fold after some years elsewhere, made a visceral soundtrack which mashed up Nirvana and electronics, the aural counterpart of Donatella’s luxury vs. grunge concept. But she herself has become the fashion equivalent of a DJ, remixing elements of her past to make new shapes the way a musician creates new sounds. It’s enough to make you wonder why more designers haven’t taken a leaf from her book, had a long, hard look at past triumphs and given them a contemporary spin.

It worked here because it felt unhinged. Like the men’s show in January, there were a thousand pieces in play: fabrics, textures, colours fighting each other in gorgeous chaos, but styled into a coherent, perversely irresistible proposal. Well, maybe not quite as coherent as it was in January, but even that seemed like it might actually have been the point. There was sheer deliciousness in a tattered lime green cashmere sweater bunched with jeweled safetypins, laid over a python-printed pencil skirt with a suggestion of red lace at the waist and a faux fox stole gripping Fran Summers’ throat (there must be a celestial fashion consensus that each season dictates how certain models get the best outfits in the shows they walk in – I would say Fran and Adut Akech are the anointed ones for Autumn 2019).

There was something exquisitely lurid about such a look, and that same quality infused the whole collection: satin slip dresses with fluoro lace stockings, or without them, with harnesses instead (like Kiki Willems’s tiny little chartreuse situation); those same harnesses restraining earnest tweeds; big fat coats hiding a multitude of sins (this was a collection for SINNERS); and Adut’s glorious gold mesh column with some odd red lace underpinnings.

Donatella literalised her back pages with a t-shirt that reproduced Richard Avedon’s 1995 ad campaign for the fragrance BLONDE. No prizes for guessing who the blonde in the ad was. She also reproduced the perfume’s Lalique bottle as a print. You can’t go home again? Not true. You can’t escape your past. The strength of Donatella’s new work is the way she embraces it, with love and fearlessness and the same dry wit with which she deals with all the tricky propositions in her life. It’s a very convincing proposition, made even more so by the casual catwalk ambulation of Stephanie Seymour at show's end, like Donatella saying, "Those women existed and here is one of them, right here, right now, still kickin'."