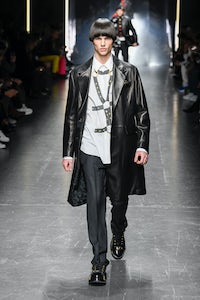 MILAN, Italy —Donatella Versace knows her divas. Her brief to soundtrackist Frederic Sanchez for her new men’s show was to the point: Ru Paul and opera. He gave her Supermodel and Maria Callas. And if that’s where Donatella thought a boy’s head is at in the second decade of the 21st century, it explained the full-on wardrobe she served.

It was intriguing that, in her show notes, she commented on how specific the idea of a MAN was in the 1990s, and how dramatic the change has been since then. It was in the 90s that her brother Gianni unleashed the ideal of the Olympian male on the fashion world. It ruled. Her own ideal a few decades later is a guy whose appetites are a lot more scattergun. In this collection, his style vocabulary had accents of punk, grunge and rave (some of the hair was pure Madchester). The initials GV reversed all sorts of ways to look like A for Anarchy. The belts and harnesses that gave old Versace a spice of S&M transgression were defanged as prints on silk shirts. The neo-Versace man wrapped an orange feather boa around his suit in a classic Prince of Wales check. A coat in the same POW topped punky PVC pants over striped boxers. I saw Kurt Cobain in a leopard coat colliding with Boy Racer in a leather Moto branded FORD. And FORD was there because boys aspire to Ferrari, but Ford is their starter car.

That meant something to this collection. Donatella was brooding on the aspirational codes of modern masculinity. The first car? The big job? The invitation was the kind of dossier a prospective employer might expect, except the key bits were redacted. Like you were applying for a job with the CIA. That’s bureaucracy, but it’s also the layers of mystery in manhood. And maybe it was also why the safety pins (in a way, they have become emblems of teen angst) were transmogrified into stolid bulldog clips.