The show didn’t feel like pandering to fashion’s new millennial frontier because there was enough of Versace’s traditional decadent quirk to provide counterbalance. 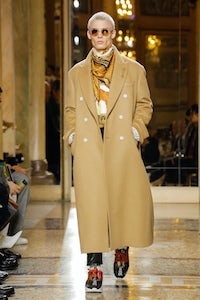 The show didn’t feel like pandering to fashion’s new millennial frontier because there was enough of Versace’s traditional decadent quirk to provide counterbalance.

MILAN, Italy — How do you follow perfection? With the triumph of her last show echoing through everyone’s year-end reviews, Donatella Versace didn’t even try. For one thing, Versace’s men’s collections never had any moments as resonant as the supermodel spectaculars that Gianni staged in the 1990s, so she didn’t have that legacy moment to draw on again. But that didn’t mean her latest effort was a pale reflection. The house of Versace still has plenty of history.

The key word there is “house”. Donatella mentioned a feeling of “coming home”, which probably confused anyone who assumed that meant Via Gesu, which is Versace’s spiritual ground zero. She wasn’t referring to the show location, she was talking about the designs that Versace has always had on your interiors: the upholstery, the curtains, the cushions, the lavish silk-and-devoré detailing that defined the way Gianni, a modern fashion emperor, chose to live. (And not only imperial plush: there were also bracelets forged from common kitchen cutlery.)

Interior decoration was certainly the way the collection came alive, in the opulent printed panne velvets, carved into second-skin sheaths for the women, expanded into puffas for the men; in the fringing and tassels and tiebacks that decorated the clothes; in the quilting that felt like comfy cushions; in the clashing plaids that felt a lot baronial, but also a little bit punk. Maybe that was Donatella’s love of London coming through.

Same thing with the clunky studded platforms. Donatella has always favoured a bit of height in her own footwear, but those shoes, paired with uniformly cropped trousers, had a bovver and glam edge. This might, in fact, have been the essence of the collection: youth cults. Not just the glittery transgressive pop kids of London in the 1970s and 1980s but also the streetwear obsessives of now. When they weren’t propped up on platforms, everyone here was wearing thick-soled sneakers. Chain links were involved, the kind of hook you’d imagine someone hoping would create a collectible curio.

It didn’t feel so much like pandering to fashion’s new millennial frontier because there was enough of Versace’s traditional decadent quirk elsewhere to provide counterbalance. But it did tend to underscore why Donatella’s last show worked so well. It was coherent in its relentless build to a killer climax. This was scattergun. Way of the world, for sure. But there is something about this woman that makes you wish her the absolute best at every possible opportunity.