Demna Gvasalia's extravagant outpourings have a fierce political core that distinguishes his approach from that of his acolytes. 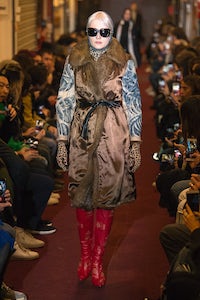 Demna Gvasalia's extravagant outpourings have a fierce political core that distinguishes his approach from that of his acolytes.

PARIS, France — Appearances to the contrary, the new Vetements collection wasn’t born in a flea market, but Demna Gvasalia said that’s where it ended up. Literally, in terms of the show’s location, the famous Marché Paul Bert, and figuratively, in the sweeping-up of fashion leftovers to make a new story. “The mix and match and juxtaposition and self-analysing and having fun,” was Gvasalia’s recipe for a major return to his roots as a designer. “I wanted to show what Margiela means to me. It’s an approach, it’s not a person. It’s a way of loving clothes, of breaking rules. And that’s what we did.”

And it was necessary, after a few seasons where Vetements got caught up in a conceptual exploration of social stereotypes. There were photo exhibitions, rather than those gutbucket shows which kicked the brand into the public eye. Intellectually stimulating maybe, but finite, exhausted, and missing the visceral punch of earlier days. The studio’s move to Zurich has clearly changed all that. “I learned in the last year how to ignore the thoughts and follow the feelings,” Gvasalia said. “This was the first collection in which I applied that method of working. Emotion and self-expression, rather than intellectualizing.”

And so the clothes were an extravagant outpouring of times and textures, of furious collage and inside-out and upside-down. “What I love most about clothes is cutting and making new stuff up,” Gvasalia claimed. Such creative repurposing echoed the happy accident of the William Burroughs cut-up technique, where stuff is chopped up and recombined in seemingly random ways that make a new kind of sense. One cut-up t-shirt proclaimed RUSSIA STOP MESSING AROUND WITH ME. Random? There are ultimately no accidents.

Next door to the Zurich studio, there’s a kindergarten. Gvasalia got the children to design t-shirts. Their brief was ‘elephant in the room’. It reminded him of the olden days when Margiela had kids to design show invitations. “My thinking about fashion,” he mused, “the rawness, the naivete.” The heart of Vetements, in other words. The scribbled-on clothes, the decals and tacked-on branding, the nomad/refugee raggedness, the warped layering and haphazard proportions added up to a chuck-this-world-against-the-wall-and-see-what-sticks chaos.

But that chaos is very human, and it has a fierce political core, and that’s what distinguishes Gvasalia from his acolytes. They need to follow more closely.