The hanger appeal of the clothes is no longer so evident. The message they're conveying, however, is as unsettling as ever. 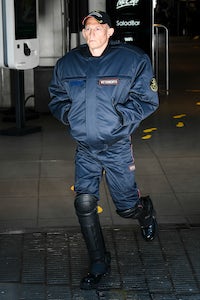 The hanger appeal of the clothes is no longer so evident. The message they're conveying, however, is as unsettling as ever.

PARIS, France — A quick Google search would have revealed that this season’s Vetements show was taking place at a McDonalds, but it came as a surprise to many walking up the Champs-Élysées on Thursday night. How has Demna Gvasalia not thought of this before? Of course Vetements should be seen in a Mickey D’s, especially one that members of France’s gilet jaunes movement often march by during Saturday protests.

There were no yellow vests in the Vetements show — that might have been too on the nose, even for Gvasalia — but there were plenty of actors wearing clothes that equally conveyed the sentiment that the world’s working classes are underpaid and overtaxed. A few of the models were tagged with “For Rent” signs on the back of their shirts. Security-detail jackets were screen printed with “Global Mind Fuck.”

Gvasalia’s security guards, his construction workers, his mechanics, could be from anywhere, eating their sleeves of McDonalds fries, slurping their McFlurrys. (The chain is open in nearly 120 countries.) But there was something particularly American about them. In France, you can’t escape the yellow vests; the size (and sensibility) of the country doesn’t allow for it. In the US, you can more easily isolate yourself from the underpaid and overtaxed— you can act like they don’t exist, in their Planet Hollywood t-shirts and their football-shoulder bomber jackets.

Until the 2020 election, that is. It’s no coincidence that Kim Kardashian wore Vetements to meet with President Trump just a few days ago.

Vetements' hanger appeal is no longer so evident. Even the floral dress coat, made from a lacquered material reminiscent of a cheap dining room table cloth covered in plastic for “protection,” as an old granny would say, was as stale as the hard candies that would inevitably be sitting atop it. But as the sound of angry, barking dogs closed the show, the audience could sense the fear, the angst, of the frequently ignored. Unsettling, sure, but maybe Gvasalia’s message — regardless of what form they come in — is as necessary as ever.