The designer's latest collection had an airy languor that, on the hanger, read bland and formless before her show gave it missing definition. 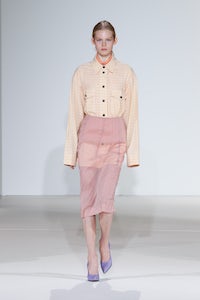 The designer's latest collection had an airy languor that, on the hanger, read bland and formless before her show gave it missing definition.

NEW YORK, United States — Victoria Beckham claims summer dressing is really difficult for her. The lightness is a challenge. During a preview the other day, it looked like the challenge might have bested her. Yes, the collection had an airy languor, but, on the hanger, it read bland and formless. The missing definition arrived with Beckham’s presentation on Sunday morning, when her clothes were given shape by the human form. Beforehand, she’d said she wanted to communicate “the power of femininity," to find “strength in delicacy." The show gave those words a little substance.

There was still plenty of droopy languor: bias cut dresses, long silk jackets with elongated sleeves, over skirts that fell almost to the floor, or trousers cut wide and loose. That was the femininity. The power was in the softly tailored pantsuits. There were soft ruffles too, deliberately crushed. “We killed the ruffle,” Beckham said gleefully.

But if that seemed a rather peculiar indulgence, her new affection for colour was easier to deal with. Pink, peach and lilac were like shades of a Saharan sunset (or Parisian macaroons). That same desert note was struck by stripes printed on sheer cotton, by floaty skirts paired with ethnic sandals, by the rustic straw baskets the models carried. Beckham played that simplicity off against glittery heels and slides, fit for a little princess whose name might just be Harper. “Except we’re taking the heels off for her,” said Mum.