A year of global political and social upheaval has given Grace Wales Bonner’s work a different kind of edge. 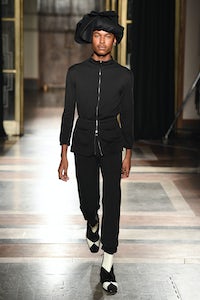 A year of global political and social upheaval has given Grace Wales Bonner’s work a different kind of edge.

LONDON, United Kingdom — Last week, Miuccia Prada was talking about the importance of relevance for a designer. She could scarcely wish for a better exemplar than Grace Wales Bonner. A year of global political and social upheaval has conspired to give her work a different kind of edge. After her show on Sunday night, she talked about “giving different cultures a similar value,” and “bringing richness and depth to street language.”

The subtly extravagant embellishment, an early signature, was still there (a couple of slinky beaded knit tops were stunning) but there was also a more urban flair, the models urgently racing by with jackets and shirttails flapping, or dressed in what Wales Bonner called ‘Second generation Windrush,” full-on dudes in harlequin leather pants or houndstooth duffel jackets. There was womenswear too, artfully reconfiguring elements from the men’s looks. The backdrop was a sound system imported from the Notting Hill Carnival. “Everything’s for real,” Wales Bonner wrote in her show notes.

And, by extension, we’re all in this together. She said her collection had taken shape in a spirit of collaboration, working with Stephen Jones and Manolo Blahnik on accessories. Artist Lynette Yiadom-Boakye contributed a dense, allusive poem ‘Over-Song for a Seer’. London producer Sampha recorded the original soundtrack. “Take it from me, someday we’ll all be free,” went one song. But Wales Bonner felt it was less a political sensibility than an emotional reaction that guided her. “I’m saying what I believe in.”

Reality aside, the allure of her work persists in its curious arcane quality. The street language that captured her imagination was that of the street preacher, capable of transforming his environment with the power of his words, the sound he makes. Wales Bonner showed one version inspired by Renaissance portraiture (Jones made the friars’ hats), another in the pure white linen of the penitent. “Making spiritual characters into heroes,” she called it. It was a beautiful — and timely — notion.