She made her name with designs that had a richness — an intricacy, even — so the severity of Grace Wales Bonner’s new collection was startling. 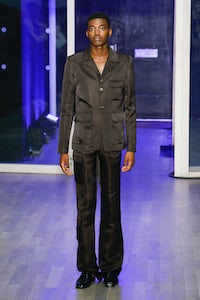 She made her name with designs that had a richness — an intricacy, even — so the severity of Grace Wales Bonner’s new collection was startling.

LONDON, United Kingdom —  She made her name with designs that had a richness — an intricacy, even — so the severity of Grace Wales Bonner’s new collection was startling. She said it felt right, “as a reaction to where I am,” which she claimed to mean her fix on 90s minimalism in fashion. “I’m interested in pushing tailoring.” Thinking back to Helmut Lang, the designer who defined that particular moment, you could see a similar militant, monochromatic precision, a nowhere-to-hide reduction to pure lines in Wales Bonner’s jackets, elongated Bermuda shorts and trousers with their cadet side-stripe. But it was tempered by the sheer physical presence of the clothes. The creased, seamed shirts, the crumpled suit with its combat pockets, the gorgeous sun-bleached leathers, the lean jacket and pants cut from black plongé, sinister, strong…. “Clothing with a kind of history,” she called it.

Quite what that history might be Wales Bonner laid out in detailed notes, with an extensive bibliography testifying to the amount of research she’d put into the collection. As a woman designing for men, male relationships are inevitably a fascination for her. “I’ve been thinking about sexuality, more than sensuality,” she said of this season. “Maybe it’s more severe in that way.” But, as her accompanying notes made clear, it was specifically black queer sexuality that absorbed her. Excerpts from a moving essay by Pulitzer Prize-winning critic Hilton Als on iconic black author James Baldwin and his queer “children” provided the philosophical context: the power of what we see and imagine and make, outside the power of the word to define it.

Music by one of those “children," the late Julius Eastman, provided the soundtrack. T-shirts featured homoerotic images by Carl Van Vechten, court photographer of the Harlem Renaissance in the 1920’s. There’s always been a reflective gravitas to Wales Bonner’s collections. In taking inspiration from a community that is one of the most fiercely marginalised in contemporary society, she upped that particular ante this season. There is, after all, a point where dignity takes on the colour of a battle cry.

And that made the presence of the women on her runway even more intriguing. “They’re quite distant, quite separate from the men,” she said, though she immediately insisted they were engaged in a sisterly way. Significantly, the detached, elegant reserve of the women helped to underscore the vulnerability of the men, barechested, barefoot in one case. It reminded me of Miuccia Prada’s attitude to menswear. And the message was ultimately the same: we stand together, sisters and brothers.