At Lemaire and Rochas, sophistication and elegance made for strong and soulful collections.

At Lemaire and Rochas, sophistication and elegance made for strong and soulful collections.

PARIS, France — With all respect due, most of today’s models are deadly cool young women with little ability to genuinely interpret the clothes they are wearing on the catwalks. This is why shows that include any theatrical action performed by models can look farcical. It happened today at the Lemaire show.

As artist Eva Moolchan delivered throbbing punk/melodic anthems in the cavernous space of the Elysée Montmartre, a wooden-floored dancehall, the models walked around randomly, giving viewers the eye like passers-by on the street. But it felt forced.

Truth be told, Christophe Lemaire quite often uses these tactics to lift clothes that may seem plain and simple, which, in fact, they are not. Lemaire is the prime purveyor of roomy, streamlined pieces in very nice fabrications which deliver a soulfully minimalistic take on French chic. 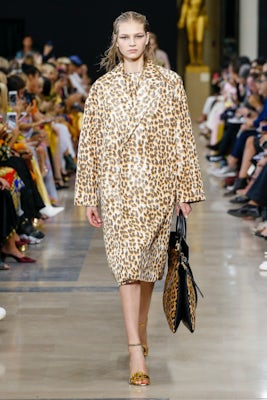 This is the kind of clothing that fits perfectly into real life because it lacks anything superfluous. They work exactly because of their lack of pretence, which should also translate, at this point, to the end of show tricks. Simplicity should be communicated simply.

Simplicity was welcome at Rochas, where Alessandro Dell'Acqua, in top form, opted for clarity: of design, fabric choice and colour. In pursuit of elegance, Dell'Acqua focused primarily on the shapes, which were simple and graphic, with a vague Sixties couture feel came to life in the sumptuous array of duchesse and radzimir silks in delicate pastels, bright pinks and yellows and timeless blacks.

Feathers provided a healthy dose of frivolity and flutter, but it was the animalier motifs that truly stole the scene, adding a frisson to a very bourgeois image.

Leopard spots and tiger stripes were the protagonists of prints, chine motifs and very luxurious jacquards lit with golden threads. Married with firm, architectural shapes, the animal motifs came across as sophisticated, yet a little bit off. It all worked quite well, conveying a sense of sophistication and elegance, with a memory but not nostalgia of the past.