The new Céline collection was more straightforward than anything Phoebe Philo has shown in recent seasons, providing breathing space for one of fashion's biggest influencers. 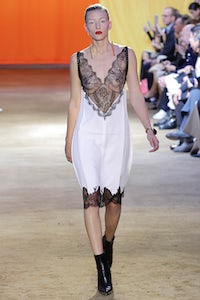 The new Céline collection was more straightforward than anything Phoebe Philo has shown in recent seasons, providing breathing space for one of fashion's biggest influencers.

PARIS, France — Phoebe Philo commissioned longtime collaborator Danish artist FOS to design the space for her latest show. She said that a particular fascination of his is the impact that different spaces have on us. That’s akin to her own interest in the way clothes shape our sensibilities. Both concerns were fully exercised in Sunday’s presentation.

First, the set: an arena of pressed sand, a space defined and divided by huge sheets of coloured plastic. Like the world’s biggest circus tent. Or like banners at the Palio in Sienna. The music that accompanied the show, played live by a trio of Danish-American musicians, certainly had the fiercely dynamic momentum of a horse race. Not so unlikely, given Philo's hippophilia (which is, believe it or not, Greek for 'love of horses'). Still, same space, different impacts. The key here would seem to be the individual response, something acknowledged by the show invitations, every single one of them a unique imprint of the house logo on a spill of wax (the wax was different on the invitations too).

All of that was a complex preamble to a collection that was actually more straightforward than anything Philo has shown in recent seasons. She herself called it “slightly strange”, the reason being that she imagined it as all a woman needed if she was packing for a year’s journey. Now that sounded strange, unless, perhaps, said woman was running away to join the circus.

But it certainly explained the diversity of the collection, from an opening passage of black lace-trimmed slip dresses (the pairing with biker boots seemed most in keeping with Philo’s notion of the slightly strange) to a pristine, puff-sleeved white cotton smock dress, to hourglass tailoring. Philo pushed the dialogue between feminine and masculine conventions, the elegance of flowing pleated dresses with keyhole backs vs the edge of Katlin Aas in a black tank and windowpane check pants. If it was Philo’s pants everyone originally wanted into, this collection will surely satisfy their lust.

For those in the fashion world who have gotten accustomed to Céline as a bellwether, Céline’s Spring might prove a disappointment, in the sense that there was nothing that felt like a revelation. Yes, there were clothes as incontrovertibly gorgeous as the olive green jumpsuit with a matching coat, and accessories as irresistible as whipstitched wedge-heeled shoes. But if there actually was revelation, it might have been something a lot more personal than what appeared on the catwalk.

After the show, Philo said she imagined her woman leaving the city, putting her feet in the sand, being in nature. Given how personally identified she is with the brand, that struck a poignant chord. It recast this collection as breathing space. 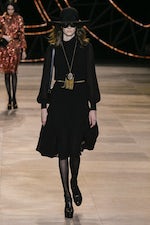 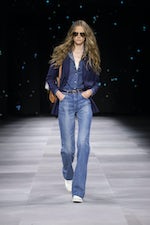 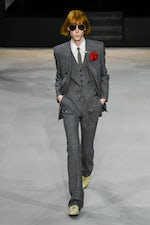 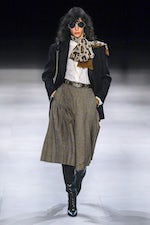