“Kill them with beauty,” Cornejo quipped backstage. “You don’t have to look like a man to be strong.” 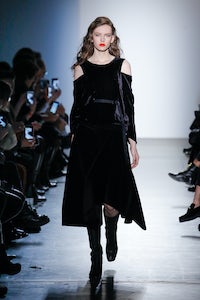 “Kill them with beauty,” Cornejo quipped backstage. “You don’t have to look like a man to be strong.”

NEW YORK, United States — Fashion’s responses to current events on the New York runways this week have been as many and varied as the number of designers on the schedule. Four decades ago, Maria Cornejo’s family was forced to flee Chile as political refugees, so she has been particularly sensitive to everything that’s going on.

Underscoring diversity, her show notes listed the countries of origin of all her models, for instance. But Cornejo took a radically different tack with her actual collection. “Kill them with beauty,” she quipped backstage. She wanted a celebration of womanliness as resistance — “You don’t have to look like a man to be strong” — but with a richness that was new for her. “Dreaming of Hermes,” Cornejo added, sort of kidding.

So if the first looks had her easy signature slouch, they were cut from midnight velvet, and later, an opulent bronze and crimson. The shaggy luxe of shearling collared a camel coat. Quilted silk had a slight samurai flair, perfect for a new warrior woman. But even with beauty as her weapon (helped by Dick Page’s red lipstick!), Cornejo maintained her commitment to sustainability and common sense. It’s pragmatism borne of personal experience, and it will serve her well in the difficult times to come.