The precision and outré strands that dominate London's fashion story were on display at Day One of LC:M — including a standout collection from Grace Wales Bonner.

The precision and outré strands that dominate London's fashion story were on display at Day One of LC:M — including a standout collection from Grace Wales Bonner.

LONDON, United Kingdom — Was that a communion wafer attached to Rory Parnell-Mooney’s shownotes? It would have been exactly the kind of casually audacious gesture that has always added a frisson of surprise to London’s shows, even as they have become the behemoth celebrated by Dylan Jones, chairman of London Collections: Men in the speech with which he opened the Autumn 2016 season. There are 170 designers signed up, a clutch of new venues, a huge video screen in Piccadilly Circus broadcasting the proceedings, all, Jones exulted, in “the greatest fashion capital in the world.” And, if not that, at least the only one that could take an audience to church so cheekily. 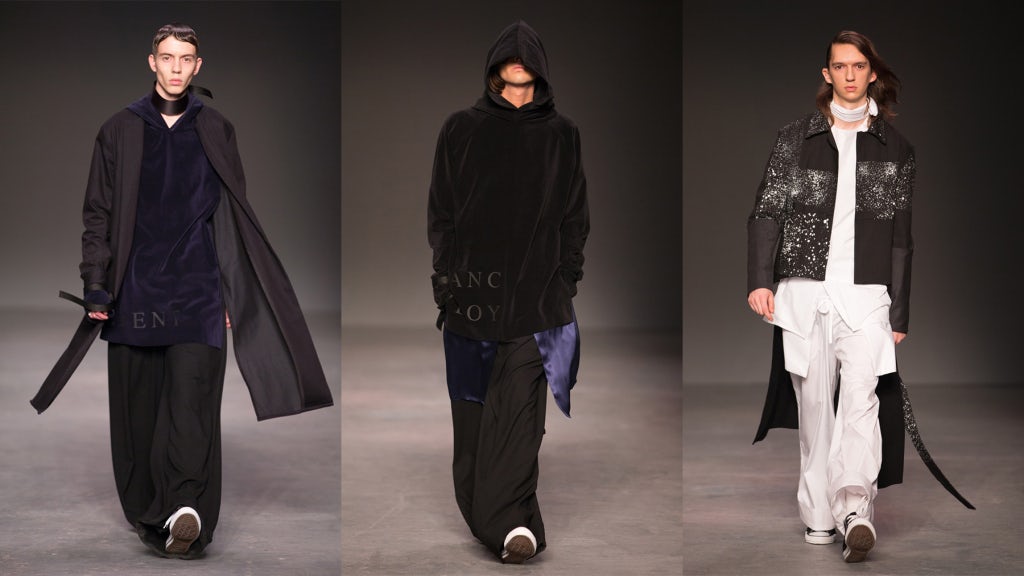 Parnell Mooney’s presentation was part of the portmanteau MAN show, Lulu Kennedy’s time-tested incubator for new talent. It’s fostered Kim Jones, Craig Green and J.W. Anderson, among many others. Friday confirmed a likely successor in the shape of Grace Wales Bonner. If Irish-born Parnell Mooney took inspiration from the tension between the authority of the church and the anarchy of youth (monastic hoodies nailed the essence), Wales Bonner described her collection as “a meditation on black spirituality.”

Deeply thought, but deeply sensual, her presentation was a standout for its elegance and its calm. From the first look — a high-buttoned, double-breasted suit, the model’s throat and wrist clasped with jewels, his fingers dipped in silver — there was an arcane, ritualistic undertow. Clothes were traced in shells and Swarovski crystals; some models had their heads gilded. There was velvet and bouclé, louche extravagance counterpointed by streamlined sportswear. Wales Bonner talked about “ecstasy and escapism,” and, for once, such nebulous notions were actually perceptible in the designs showed. 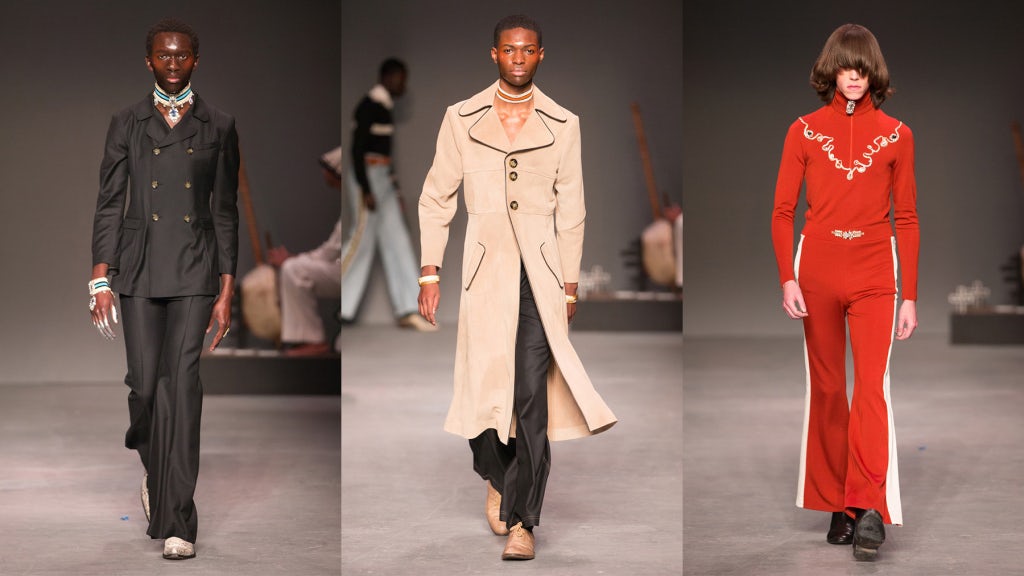 The third MAN was Charles Jeffrey, whose East End club night Loverboy is his laboratory, where friends dress up, take pictures of each other and inspire Jeffrey’s work. Alright, the Supergrass hit on the soundtrack, summed up the mood: “we are young, we run free,” with the recklessness the rest of the world has always found so enviable. Jeffrey trails in the wake of the magnificent London tradition of the club that begets an entire ethos (you could see a bit of Westwood here, a bit of Bowery there) but there was also a spectacular amount of technique on show, like the slouchy, but buttoned-up “drunk” tailoring, the artfully chaotic knits and the painted denims. And Jeffrey’s sense of event was quite the match of his legendary predecessors.

Nasir Mazhar also touched on club life in his collection, all done up in the monochrome of night, with the odd white shirt to lighten the darkness. London fashion has always drawn strength from its conglomerate of style tribes. Mazhar’s acolytes were like manga paratroopers — a boy expanded to Michelin man proportions in a ruched top and pants, a girl bared in a body suit dissected to nothing. They were equally strong. One image lingered: a laurel wreath picked out in white feathers on a black background. To the fashion victor, the spoils. 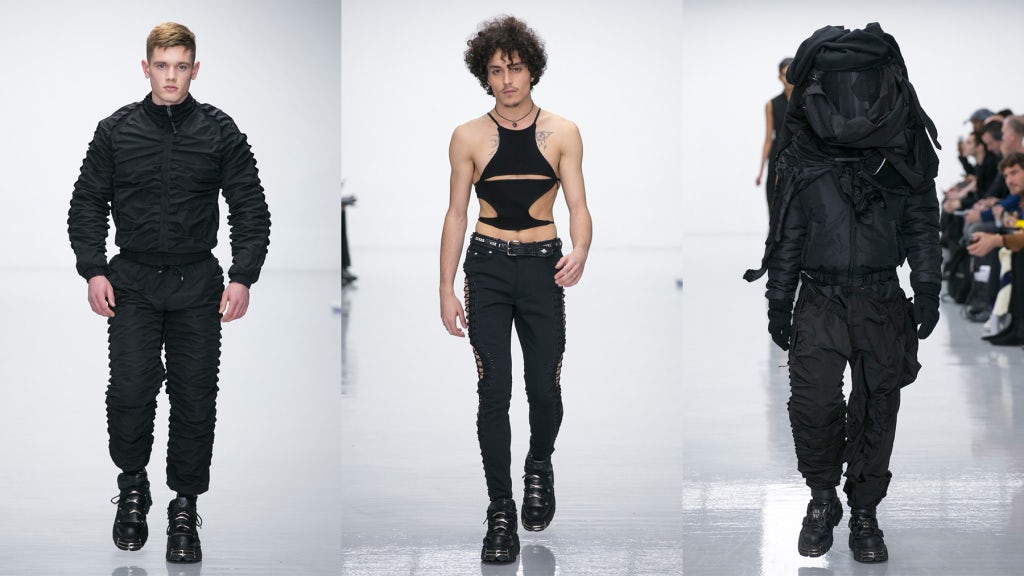 There have always been two major strands in London’s fashion story: the precise and the outré (with the odd genius like Galliano or McQueen to bring the two together). Topman showed London Collection: Men’s first collection, on the first day of the entire Autumn season (which will end March 9th in Paris). Design Director Gordon Richardson and his crew always have their finger in the wind. Last season was precision, this one was all about the louche. Topman offered a grunge-y male glamour: panne velvet suits, bouclé jackets, long silky shirts and robes which were the apotheosis of pyjama dressing, with voluminous vintage-y coats thrown over top. The collection erred a little on the Norma Desmond side, but Richardson was adamant that the Topman customer has come over all experimental and will be dead keen on gilding his lily. Alessandro Michele made a similar bet, and it’s paid off in spades for Gucci. We’ll know soon enough whether Topman’s wager has worked. 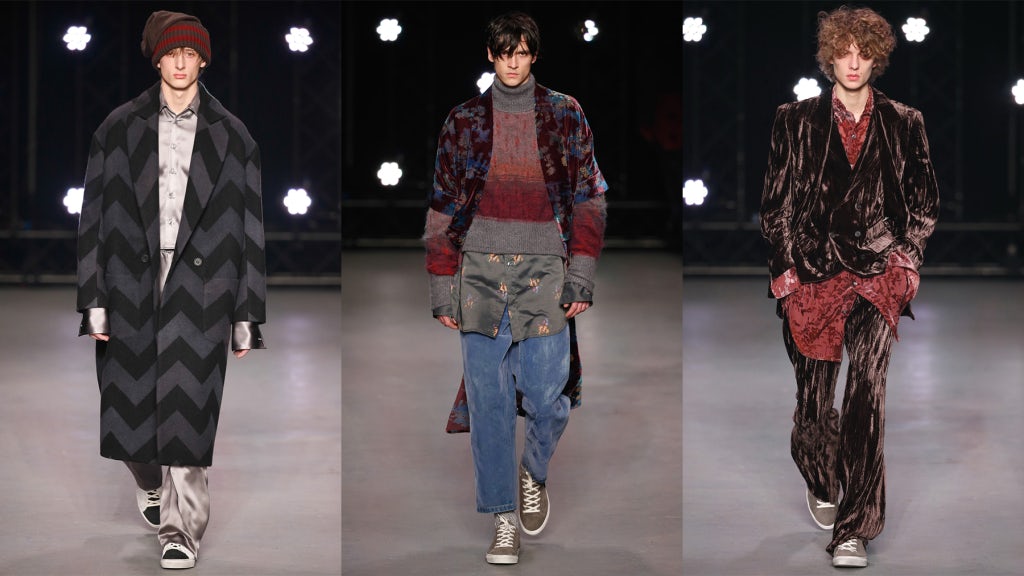 Paula Gerbase didn’t need a show for her label 1205. God knows she’s not alone in such over-reach, but just how much she didn’t need to follow convention was made abundantly clear by her witty, articulate post-show dissection of her designs and, more particularly, her fabrics.

Gerbase stroked layers of silk-like polyester so light she said they evoked intimacy for her. She indicated a coat in bonded cotton that looked like camel, felt like suede, while she talked about clothes that “celebrated the everyday.” Celebration was also the inspiration for the embroidered numbers that were hidden in the clothes — the length of a trouser leg, the width of a collar. It’s all her Savile Row training coming through.

“I wanted to celebrate the millimetre which makes all the difference in menswear,” Gerbase explained. But she also considered those little digits to be another form of intimate communication with her customer. And I’d rather watch her communicate than a stream of models parading listlessly around to Kraftwerk.