Hussein Chalayan showed a collection of menswear that was as fresh, light and relaxed as the season it celebrated. 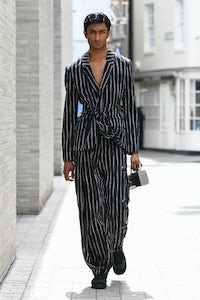 Hussein Chalayan showed a collection of menswear that was as fresh, light and relaxed as the season it celebrated.

LONDON, United Kingdom — On a sun-dappled alley over the road from his Mayfair boutique, Hussein Chalayan showed a collection of menswear that was as fresh, light and relaxed as the season it celebrated. The models walked with baby boom boxes, a charmingly tinny mobile soundtrack. At one point in Chalayan’s career, such music on the move might have suggested the cherished possessions of displaced refugee populations. He laughed when I said that.

On Sunday afternoon, the music was just that…music. There was, still, however, one of those dense sociopolitical subtexts Chalayan favours. It was explicit in the title he gave his collection, “Post-Colonial Bodies,” defined in his notes as “a study of dance and movement amongst various ethnic groups which have been colonized by Western forces.” There was, for example, a print of the mino, the straw coat which is traditionally worn in some Japanese new year celebrations. It had been overlaid with a tango dance chart (America occupied post-war Japan, the Spanish and Portuguese conquered South America).

But you know what? In the end, it mattered not a whit whether you knew your mino from your tango. The colour palette – white, ivory, navy, cumin – hinted at hot zones. So did the collarless overshirts, kurtas and voluminous pants. Their easy fluidity defined the silhouette. The fabrics – almost all of them from Japan – had the textural interest that makes designers like Issey Miyake perpetually interesting. And there was a sportiness too, in the layered bermudas, the elasticated waists and ankles. Picture a Japanese fisherman playing basketball in South Central LA. There's a hybrid worthy of Chalayan's magpie imagination.

This year is his 25th in business. A quarter of a century as one of fashion’s arch-thinkers! So he had to throw us at least one brainiac bone. A couple of models had hiking sticks inserted down the side seam of their trousers. Again, I suggested they might be a comment on people turned into nomads by socio-politics. This time, Chalayan didn’t laugh. He said the sticks were a way to straighten the legs. “This is how power affects the body.” And that was my food for thought on Sunday night.