Glenn Martens’ stated Belle Époque inspiration was evident in the curvaceous ballgowns that closed the show but the rest was business as usual. 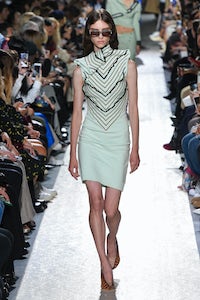 Glenn Martens’ stated Belle Époque inspiration was evident in the curvaceous ballgowns that closed the show but the rest was business as usual.

PARIS, France — Getting into a Y/Project show is always an ordeal. The queue at the door is monumental and the number of seat-stealing gatecrashers is high. It’s annoying to be sure, but it’s also a testament to the cult status of Glenn Martens, the mastermind designer behind the label's reinvention and success.

Today’s show was no different, held in the belly of the Pont Alexandre III in a cavernous space that once hosted a nightclub, it was thronged. As Strauss' ‘Blue Danube' waltz kept spinning faster and faster, models paraded Marten's very own, highly distorted take on Belle Époque dressing. At least, this is the inspiration the designer claimed backstage, and which was evident in the curvaceous ballgowns that closed the show.

For the rest, it was business as usual, which for Martens means a highly inventive, malleable take on classics, distorted this way and that and turned into pieces that can be worn in many different ways according to the will of the wearer. This collection, truth be told, did not mark progress for Martens. With its coiling lines and twisting silhouettes, it was the nth iteration of Y/Project’s well-established repertoire.