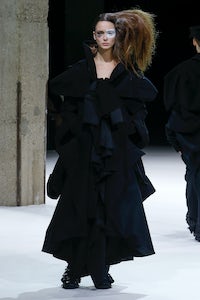 PARIS, France — Black is eternal for Yohji Yamamoto. So is deconstruction. It's been like this for almost forty years and still we can't get enough. Truth be told, a Yohji show is a highly repetitive affair: from the acoustic music to the punky hairdos. Yet, Yamamoto has a wonderful way of turning repetition into poetry and monotony into symphony. His shows always resemble each other, yet they are never the same. The variations on the theme are almost infinite.

Today, for instance, the proceedings took a spiky, volumetric turn, with coats multiplying with several layers and boxy volumes sprouting in unexpected places. It made for a cubist effect that felt fresh. There were bustiers, too, signalling an interest in female forms beneath the shapeless shapes. With its monochromatic firmness, the collection primarily felt like a powerful antidote to all the broad shouldered glitz that's taking over fashion-land, which is exactly the kind of remedy Yohji brought in 1981.