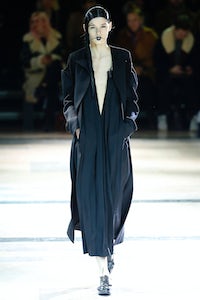 PARIS, France — In a moment of reconsidered deconstruction, the work of Yohji Yamamoto, fashion's primo deconstructionist, is more relevant than ever. He has a way of dealing with unstructured tailoring, liquid form and coiling lines that is unique: always the same and yet always different. Generations of designers owe him a debt. But unlike his many imitators, Yamamoto has always kept his elegant touch.

Friday's show featured mannish tailoring from start to finish: no panniers and petticoats this time around. Equally unremitting was the colour palette: a flood of black with occasional shots of white. That's it. Yamamoto kept the silhouette straight, lean and light, almost monastic: coats were so weightless, they almost resembled dusters. There was a pervasive sensuality to the proceedings, though, conveyed via cuts that gave the impression of garments graphically falling apart. The collection climaxed in a crescendo of deconstruction, getting more complex as it unfolded. It was wonderfully poetic​, if a bit repetitive​.​ ​

As much as Yamamoto is a poet — the poet of infinite shades of black — he is also a rebel. The last group of outfits came sprayed with blotches of ton-sur-ton varnish and scribbled with anarchist slogans. It made for a charming take on dressing as political act: using clothes to declare where you stand in this world. Yohji's posse stands for strength, androgyny and soulfulness. 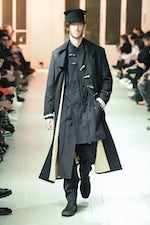 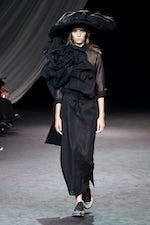 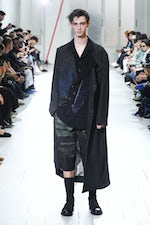 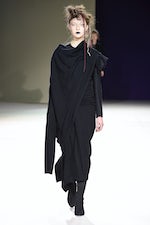 The Magic of Yohji Yamamoto