The master was in top form. This season there were a lot of cut-outs, revealing glimpses of the body and offering ventilation for a warming world. 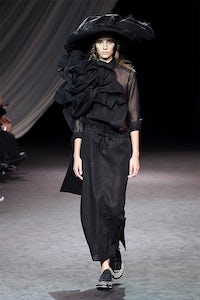 The master was in top form. This season there were a lot of cut-outs, revealing glimpses of the body and offering ventilation for a warming world.

PARIS, France — Before we start, a plea for mercy addressed to Yamamoto-san, whose ever poetic shows never cease to inspire and amaze. Watching so much mastery on such tiny, uncomfortable chairs is an unnecessary struggle that takes away much of the pleasure of the experience. Or maybe augments it... depending on one's kinks. After all, the poet has a punk spirit. As he took his final bow, the slogan "NO FUTURE" could be read clearly on the back of his black coat.

“I was born to be poetic,” said Yamamoto backstage. This was the master, again, in top form: taking long, flowing lines this way and that in order to explore even more dimensions of the colour black. This season there were a lot of cut-outs, both angular and curvy, that revealed glimpses of the body underneath.

“The world is getting hot, our summers are sweltering: ventilation is needed," he conceded, hiding his technical wizardry behind practical and ecological considerations.

Presented on flat sneakers, Yamamoto's nth foray into the territory of poetic elongation felt captivating and engaging. When a couple of printed dresses emerged, it was a retinal orgasm, then black kicked in again. A show like this, however, does not need too many words: it asks to be felt, not described. A hint of Yamamoto’s intentions: "I like to mix very serious things with very silly things.”