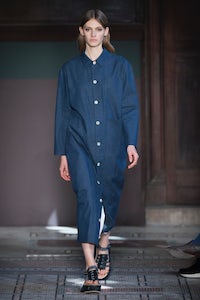 33 View Collection
Fashion Week
Share
Comment
By Tim Blanks October 26, 2015 10:05
Share
Comment
By Tim Blanks October 26, 2015 10:05
PARIS, France — Julien David ticked off some pretty significant numbers after his Spring presentation. It was his tenth show in five years in business and he now sells in 100 stores around the world. Not bad, given that his aesthetic continues to be as idiosyncratic as ever. For Spring, it was a peculiar combination of sophisticated thought and naïve execution. The way, for instance, in which he brought together the traditions of France, where he was born, and Japan, where he grew up as a designer, was schizo-striking. “Royale and rural,” he called the marriage. So there were motifs of sunflowers, fleur-de-lis and cherry blossoms weaving through the collection. But the clothes themselves had an undone or unfinished quality, starchily, choppily asymmetrical or long, shirty and shapeless.
Maybe that’s because David’s preoccupation continues to be the vagaries of urgent youth. “It passes, but it’s always the same because of naïveté,” he mused. He was thinking of “the rawness, the bareness,” of youth, rather than any specific point in history. So the touch of French royale in the courtly 18th century pannier silhouettes was balanced by Japanese rural in the denim utility-wear. The apron dresses and milkmaids’ corsets were equally touched with history, but David mixed them with the tomboy-ish now. A personality that split meant the collection was doomed to never really find its feet. And a soundtrack that mixed Elliot Smith’s addict moan Needle in the Hay with the vigorous trap of Lady Leshurr’s Brush Your Teeth seemed to admit as much. 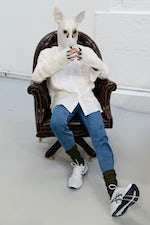 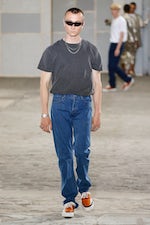 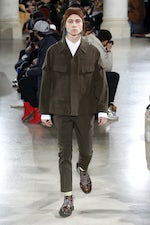 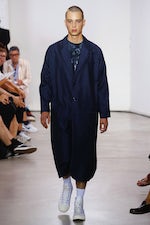