A New Game Could Be Fashion's Farmville. Will People Pay to Play?

A New Game Could Be Fashion's Farmville. Will People Pay to Play?

NEW YORK, United States — A decade ago, if you had told fashion industry veteran Lucy Yeomans she would become a gamer, she would have laughed.

Yeomans spent 12 years as the editor-in-chief of Harper’s Bazaar UK, and was also the founding editor-in-chief of Porter, Net-a-Porter’s editorial arm, which she ran for seven years. The overlap between her readership and video game enthusiasts was likely small.

But like countless others, Yeomans stumbled upon Farmville a few years ago. And while she was weeding virtual strawberry farms and caring for digital cattle, Yeomans began to ruminate on the idea of a game that could give users a similarly addictive window into the insular world of high fashion.

“I had access to the top photographers, models, and locations ... but most people don’t get such a close look into fashion,” Yeomans said. “I thought a lot about how I could bring these elements to an audience, and allow them to create their own content.”

Her mobile fashion game, Drest, launches October 8. Users are presented with the goal of becoming a top fashion stylist via challenges like dressing clients for the Met Ball or styling the nonagenarian Iris Apfel for a fashion shoot. Finished looks are submitted to a community homepage, where users can rate them. The best receive virtual prizes. 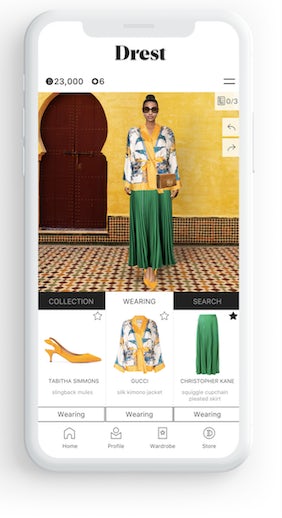 A styling look inside Drest. | Courtesy

Drest is free to download, but microtransactions are built into the game. Users start with a virtual budget of $15,000 “Drest dollars” that they can spend on clothes, makeup and accessories. Each additional $5,000 bundle costs $3.99.

To sweeten the pot, Drest partnered with Farfetch, digitising the e-commerce company’s inventory for in-game clothing. Users can also purchase real-life versions of the product from Farfetch within the app. Gucci is also sponsoring challenges that feature its products. Both Gucci and Farfetch declined to comment for this story.

It’s a model pioneered by Farmville, which has generated hundreds of millions of dollars for its creator, Zynga and spawned countless imitators. In the fashion world, players can pay to update their virtual wardrobe in order to climb the show-business ranks in the Kim Kardashian: Hollywood game, launched in 2014 by Glu Mobile. In 2016, Glu acquired Covet Fashion, which, much like Drest, offers users fashion challenges. Lovelooks, a fashion game that launched last year, lets users dress paper dolls up and earn points they can cash out for real items, including Glossier products.

And although historically, gaming culture has been dominated by men, women have become a rising demographic in the space. Sixty-five percent of women in the US played mobile games, according to a 2017 survey from Google Play.

But the market for fashion-themed mobile games is far smaller, said Wedbush analyst Michael Pachter. He estimates that Kim Kardashian: Hollywood and Covet Fashion earn revenue of about $30 million and $60 million annually.

“Women are an underserved niche [in gaming], so there is an opportunity to market to the passionate readers of fashion magazines,” he said. “But I’m not sure we need another fashion game. I doubt this could hit Candy Crush-level success. The demand isn’t the same.”

Women are an underserved niche [in gaming], so there is an opportunity to market to the passionate readers of fashion magazines.

The worlds of fashion and gaming have been colliding for some time now. Players of Fortnite, from Epic Games, reportedly spend $300 million a month on “skins” that change their in-game appearance. Nike made sneakers in May specifically to be “worn” by Fortnite players. In September, Louis Vuitton partnered with Riot Games to debut skins for League of Legends, plus a branded trophy case for winners of the game’s world championship.

“There’s been tremendous growth in the space and a lot of it is driven by the accessibility from mobile,” said Mark van Ryswyk, the executive vice president at Glu Mobile. “There’s actually an opportunity to bring more aspirational experiences to gaming.”

Brands see gaming as a way to market to millennials and Gen Z shoppers, who may not be able to afford designer products, but can buy their virtual equivalent.

Badgley Mishka is one of about 150 brands that has partnered with Covet Fashion. The game is now the third-largest driver of traffic to the brand’s site, said Christine Currence, Badgley Mischka’s president.

“Even if it isn’t directly driving sales, Covet is helping us build brand awareness and giving us a chance to engage with consumers in a new way,” she said.

Yeomans said there’s a greater overlap between fashion and gaming than at first glance.

“Fashion and gaming are both about escapism,” she said. “They are about adopting a fantasy version of yourself. And the narrative in fashion is so compelling. Who needs guns and ammo when you can put on a Chanel jacket and Manolos. Those pieces are empowering.”

Who needs guns and ammo when you can put on a Chanel jacket and Manolos. Those pieces are empowering.

Drest, which has a team of 75, has a private investor, Graham Edwards, the founder of commercial real estate company Telereal Trillium. Edwards introduced Yeomans to Drest’s now-Chief Operating Officer Vivion Cox, who has a background in building tech platforms for startups.

Drest is launching with a waitlist and will open up the game to a mass audience in 2020, once it has built a core user base. It will also add digital avatar versions of famous models and influencers.

The hardest part of building a successful mobile game, said Pachter, is creating a thriving in-game economy that meets the needs of users willing to spend real cash and those who want to play for free.

“It’s a hard balance between making everything available for someone who doesn’t want to spend money, and also appealing to the person who has more money than time and would rather spend than burn hours playing,” Pachter said.

The microtransaction model is also coming under scrutiny, with critics warning of a “compulsion loop,” where games push users to play more — and pay more — in order to obtain rewards. A UK government committee released a report in September declaring that mobile gaming should be regulated, arguing that loot boxes — randomised in-game rewards doled out for playing a certain amount of time, or for a small fee — are forms of gambling. In the US, Sen. Maggie Hassan (D-NH) has pushed regulators to investigate if children are in danger of being exposed to entry-level gambling with loot boxes.

Wedbush’s Pachter believes Yeomans’ connections to the fashion world could help the game build a new model of gaming revenue. Having Gucci or Farfetch market the game could also expose Drest to newer users, Pachter added.

“A lot of gaming companies have tried to put a foot in the fashion world, but it hasn't worked,” Cox said. “This game, though, has been built by a hybrid team of gaming and tech, and it also comes from fashion’s very own. Lucy has a track record of creating beautiful things the world of fashion enjoys.”