JD.com, Stepping Out of Alibaba’s Shadow?

JD.com, Stepping Out of Alibaba’s Shadow?

BEIJING, China — Haoyu Shen is too dignified to characterise it as a ‘war.’ Seldom do company leaders use that sort of language outside the boardroom and the chief executive of JD Mall is no exception. In a recent conversation with BoF, Shen directed more than a few barbed comments at an unspecified ‘competitor’ but he wouldn’t be drawn on naming his key adversary on the virtual battlefield. No need. Anyone familiar with China’s vast e-commerce market knows that the two armies facing off are JD Mall and Alibaba’s Tmall.

Both are general merchandise B2C e-commerce platforms, selling everything from furniture to food to fashion. And both operate on an epic scale. Tmall, which hosts storefronts for major brands, including Burberry and Zara, positions itself as China’s largest online marketplace. According to iResearch China, Tmall’s market share of the B2C online shopping website market is over 50 percent, while JD.com’s share is less than half of this. However, JD.com claims the crown as the country’s largest online direct sales company and has been making an aggressive push to attract more international fashion brands to its stable. 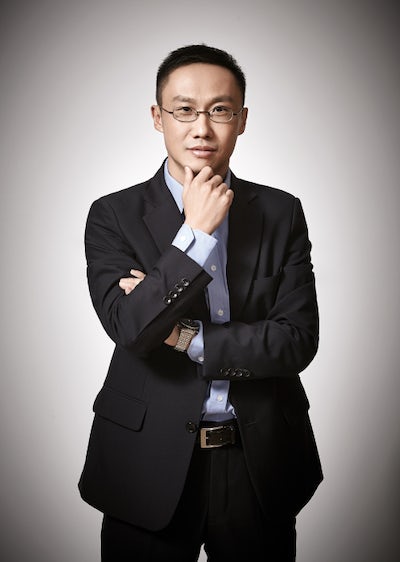 In February, Shen’s team landed in New York where they made some waves for JD.com during fashion week by sponsoring a handful of young Chinese designers in a group show. Playing to the company’s strength with American merchants – Calvin Klein, Tommy Hilfiger and Gap are all sold on the site – Shen used the city as a launch pad to extend awareness to other industry leaders in the US. This week, his team are in London trying to diversity their international offering by recruiting UK brands in the same way they did in Italy last year.

Having just inked a deal with Wal-Mart estimated to be worth $1.5 billion, JD.com’s posture seems more aggressive than it has in years, but the Chinese market is still consolidating and competition is no less fierce. BoF sat down with Haoyu Shen, chief executive of JD.com’s JD Mall unit, to learn more about the company’s fashion strategy.

BoF: JD.com is a colossal e-tailer with an impressive share of China’s online market, but it still lives in the shadow of Alibaba’s Tmall. What are you doing to become more competitive against such a major player?

HS: By building our business from day one, 13 years ago, focused on quality and authenticity, we’ve [built] credibility among consumers, most of whom now value real products over fakes. That’s why we’ve consistently outpaced the market in growth and have been gaining market share.

BoF: This is something your management team likes to talk about a lot – JD.com’s “zero-tolerance policy” on counterfeit goods. Presumably, you must believe your policy is more successful than Alibaba’s — but why?

HS: There’s a difference in philosophy as well as business model. If your management believes that fakes are better quality than authentic products, then your websites will reflect that. We couldn’t disagree with this idea more strongly. We’ve built out a direct sales business where we control the supply chain to ensure that we’ve got the strongest controls possible.

Second, when we launched our marketplace platform we committed to limiting the number of sellers, gradually growing it to 100,000 but not going past that. This is the number of sellers that we can effectively oversee using methods like inspection of documents before a seller joins [as well as] third-party monitoring companies and big data analytics to keep fakes off our site. You simply can’t have a business model that allows 10 million sellers and claim that you’re prioritising tackling counterfeits.

BoF: Last year, JD.com reported a GMV (gross merchandise volume) of 462.7 billion RMB ($65 billion). What proportion of this was in the fashion category?

HS: We don’t break this out, but fashion, apparel and footwear have consistently been among our fastest growing categories. When you look at the number of items purchased for different product categories, these are consistently at the top of the list.

BoF: You sell many international sportswear and apparel brands like Gap, Esprit, Marks & Spencer and Forever 21 but a relatively few high-end designer fashion brands like Calvin Klein and Tommy Hilfiger. How can you persuade more international brands to partner with you over the likes of Tmall, Yoox Net-A-Porter or Chinese fashion verticals like Shangpin, VIP and others that have a loyal fashion following?

HS: It’s a fair point that high-end fashion brands are at the early stages of getting comfortable with selling on an all-category platform. We get that hesitation. The reality is, in China people do most of their shopping online, so it’s a different dynamic than in the UK or the US. If high-end fashion brands want to be in the China game, they’ll need to be online, and they’re increasingly recognising that.

We recently launched Y-3. For traditional luxury brands, we’ve recently launched an online store for Trussardi. We’ve done a lot of outreach in the US. We’re growing quickly in Europe too [but] the reality is that European brands may not realise that we’re the largest Chinese e-commerce by revenue or that we have 170 million upwardly mobile customers. We’re working to change that.

BoF: In the early years, JD.com’s founder Richard Qiangdong Liu enjoyed a lot of success in categories like electronics but, for some consumers, the site is still synonymous with those kinds of products rather than fashion. Don’t you need to up JD.com’s fashion credentials even more to change those perceptions?

HS: Our roots were originally in electronics, but we’ve long been a full category seller. Amazon has roots in books, but no one would say they’re only a book-seller today.

BoF: Is that the foreign player JD.com most closely resembles?

HS: People have compared us to Amazon, and in the sense that we have our roots in direct sales and have added a marketplace to complement that business, it’s probably fair… We have both direct sales and marketplace models, but generally speaking, for long-tail categories like fashion, the marketplace model is more common. Even within that model we can offer brands our warehouse space and logistics, which is unparalleled.

But the reality is that no e-commerce company in the world can offer same- and next-delivery standard to a population of more than 600 million, so I’m not sure there are really any complete parallels. When you add in that you can directly shop on JD.com through WeChat and our brands can directly conduct targeted marketing on the overwhelmingly dominant messaging app in China, we really have a unique proposition.

BoF: Let’s talk more about that. When WeChat’s parent company Tencent invested in JD.com a couple years ago, analysts predicted it would be a “game-changer” to innovative mobile marketing solutions. But sceptics now suggest it hasn’t been quite so rewarding – has it really?

Let me give you a specific example. On Singles Day last year, more than half of our first time customers came from WeChat and Mobile QQ, Tencent’s two social media apps. That’s just one of the many examples of how the Tencent relationship has been a total game changer.

BoF: The Tencent partnership has gone some way toward helping you compete with Alibaba’s affiliation with Weibo but how do you counter their broader ecosystem including the Alipay payment platform?

HS: Let’s put this in perspective for a moment. If you speak to Chinese people, WeChat is by far the most important Internet platform in China with 700 million monthly users. More than half of all time spent on the Internet in China is spent on WeChat. Think about that for a moment. That’s more than browsers, more than email and certainly more than other social media channels. And on top of that WeChat has an electronic payment system that is completely ubiquitous in the country. It’s not a coincidence that Tencent is the most valuable Internet company in China.

BoF: The government’s recent import tax policies and regulations on cross-border retail are complex and sometimes seem contradictory. How can the current situation be improved to make business easier for e-commerce players like you to benefit more?

HS: Cross-border regulation is still in the early days, so there is some work still being done. However, the channel that this has opened up is tremendous. At the end of the day, customers will choose the cross-border model because they value high-quality imported products, not for price arbitrage.

BoF: You’ve made significant investment over the years with JD’s own warehouse network and advanced logistic chains. What are the specific barriers that you’ve been trying to overcome and how much progress is there still to go?

HS: We’ve been building fully automated warehouses that are incredibly efficient and make sure we get the packages to customers at speeds that other e-commerce players envy. When I go to the US or UK and order a package at 10am, I always expect it that afternoon, but so far other companies have only been able to duplicate our efficiency on limited scales.

BoF: There has been a lot of talk about drone delivery with projects like Amazon Prime Air. How plausible is drone delivery in China now and how likely do you think it is for the near future?

HS: We’re under trial operation for drone delivery in rural areas, which represents a huge potential market. It's not designed to go directly to people's doors, but rather to JD village promoters who can deliver to rural customers' houses. We hope it will eventually help us more efficiently get all of the packages into the countryside where the roads may not be great.

BoF: Many in the global fashion industry have been hit by the economic slowdown in China. Do you believe the Chinese market will continue to decelerate in the coming year or have we seen the worst of it?

HS: While obviously there are concerns among consumers, the consumption growth on JD.com – and the overall consumption growth in China – is still quite healthy. The transition from brick and mortar to e-commerce may be benefiting us here, as the sector tailwinds are quite strong. We’re also seeing a huge shift away from the C2C business model that used to dominate Chinese e-commerce, but doesn’t prioritise quality and authenticity the way ours does. So yes, there are some headwinds, but we are seeing tremendous tailwinds as well.