Where de Vos and Pilotto hit the mark was in creating interesting texture, which may translate well into simpler pieces. 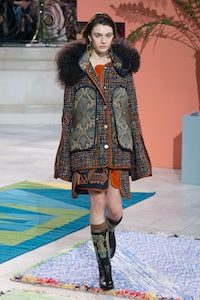 Where de Vos and Pilotto hit the mark was in creating interesting texture, which may translate well into simpler pieces.

LONDON, United Kingdom — Christopher de Vos and Peter Pilotto were at the entrance to their show, greeting guests as they arrived. Shouldn't they be backstage, we wondered? Apparently not; this show was about home, they said.

At one of the round sculpture-laden tables swaddled by fougère, a little girl was sat on one of the rainbow-hued stools, distracted from the madness of her surroundings by a colouring-in book, which the set the tone perfectly. After all, what could be more uplifting than a riot of colour at times of chaos? It's the kind of thing that is instantly uplifting; anyone that's seen a David Hockney landscape can testify to that.

A distinct South American influence — the colder side of the region, that is — could be felt in the colours seen throughout the collection, not unlike Peruvian woven fabrics, which positively vibrate with saturated neons. The duo used that palette to embroider geometrically quilted silk and tweed parkas with seriously shaggy Mongolian goat hair trimmings. The outerwear really stood out, and the combinations of colours and textures made them a fabulous alternative to the everyday khaki, fur-lined paradigms.

Some of the other design details, however, were problematic: for example, the super-long sleeves on many of the coats, dresses and knitwear. Perhaps the designers were just exaggerating the proportions for the sake of catwalk spectacle, but it’s difficult to imagine a woman eating spaghetti, reaching for a canapé or even searching for the right emoticon in those highly impractical sleeves, which the designers said were adjustable with zips on a handful of the pieces.

The Andean knitwear, too, looked perfectly oversized and cosy with patterns of loop stitching, but the sporadic square intarsia patchworks looked too much like those seen in Jonathan Anderson’s last menswear collection, in both colour and placement.

Where de Vos and Pilotto hit the mark was in creating interesting texture, which may translate well into simpler pieces. The highlight of their experimentation was the two dresses with lively illustrative chenille embroidery. One was an electric coral cady style, with tangerine and pale pink on top, and the other was black velvet with moss green and tangerine embroidery. Both dresses could do with losing the asymmetric elbow-length sleeve (note: singular) in order to pack a punch with a simpler and more flattering silhouette.

On that note, the trousers, too, were tailored to a specific build. They featured athletic zips that caressed down the front of the thigh, curving towards the inside of the ankle. It gave the models’ lithe limbs a sense of curvature, which looked great and will do on anyone with a similar physique, but on a shorter or wider pair of legs, they’d simply look unflattering.

One final note: the squiggly coils of ombré glass jewellery, designed in collaboration with glassblower Jochen Holz, really caught the eye. Before the show, a considerable amount of the fashionable guests, almost all of whom were women, were sporting statement earrings in some form or other — instantly accelerating their cashmere sweaters and simple cotton shirts. It’s easy to imagine these intricate pieces becoming additions to their burgeoning jewellery boxes.