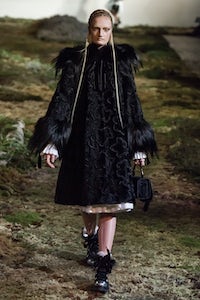 PARIS, France — The first thought that popped into the mind upon seeing the set for the Autumn/Winter 2014 Alexander McQueen show was the film Wuthering Heights and the cold wind-swept Yorkshire Moors. While that thought didn’t exactly pan out in the show, the dark romantic sentiments did.

This collection by Sarah Burton felt both closer and further away from the work the brand’s founder produced during his lifetime.

The Elizabethan look of the show was classic McQueen. As were the almost feral fur coats and the dramatic make up and skullcap braids of hair circling the head.

What was different was Burton’s move to make her garments, while just as theatrical and couture in their execution, much more forgiving in construction. Beautiful pristine white eyelet dresses were crafted with gentle a-line skirts that began high up with an empire waist. Stunning purple and green hand cut feather coats came with rounded shoulders and roomy silhouettes. Even the footwear, flat lace up hiking boots finished off with a fur trim and metal tipped toes, were some of the most practical shoes to possibly ever walk on a McQueen catwalk.

But as lovely as this collection was, it was missing a fundamental element of danger or perhaps just audacity to set it alight and make it glow from within as has often been the case in the past. Maybe this lack of vigour can be put down to the mood lighting, which made it difficult to take in all the more detailed design elements.

Whatever the case maybe, the end result was a fine McQueen show, just not one of its finest.