LONDON, United Kingdom — For most luxury brands, Fashion Week is about showcasing collections with elaborate fashion shows. Exclusivity is baked into the planning; only press, buyers and VIPs receive invites.

But Anya Hindmarch, whose namesake accessories brand is well known for its tongue-in-cheek humour and playful designs, has never been one to play by the rules.

This London Fashion Week, Hindmarch will turn Soho's Brewer Street Carpark into a giant maze, its pillar-box red hue evoking traditional British letter boxes, to promote the new Postbox handbag. This isn’t Hindmarch’s first rodeo: Spring/Summer 2020 is the fourth season she’s axed the traditional fashion show for press and buyers in favour of an experience aimed directly at her customers.

The formula appears to work. The brand's first experiment, the Chubby Hearts Over London project, which saw giant heart-shaped balloons flown over different London landmarks last February, generated 12 million Instagram impressions, according to the brand. The two ticketed events that followed, The Chubby Cloud and The Weave Project, sold out, attracting 3,000 and 4,000 guests respectively. The brand’s Neeson bag, which launched at The Weave Project, has been one of its best-performing new styles in years.

“We really wanted to move away from the traditional fashion show, which was very much for an industry-facing audience, to open it up to industry plus our customers,” Hindmarch told BoF. “It just makes sense. It just feels more modern.”

The unusual fashion week strategy is part of a broader turnaround plan for the brand, which Hindmarch founded in 1987. Hindmarch and new partners Javad and Narmina Marandi bought back the brand from long-time majority investor Mayhoola for Investments, a Qatari fund, in March. Hindmarch also took on the role of managing director in May, taking a formal role on the business side of her brand for the first time since relinquishing her CEO title in 2011.

As part of the turnaround, the company has invested in e-commerce and is closing some stores, while experimenting with consumer-facing events and digital marketing campaigns. According to regulatory filings with Companies House, the company recorded an EBITDA loss of £9.6 million ($11.7 million) last year, narrower than the £17 million EBITDA loss in 2017; revenues reached £24.7 million, down from £37.2 in 2017. 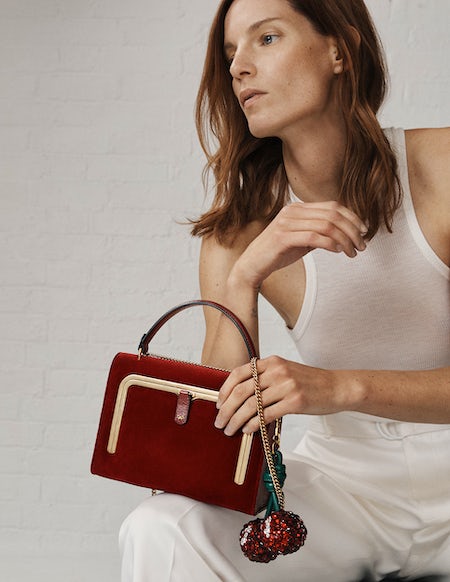 This season’s installation is inspired by MC Escher’s Metamorphosis III mural, which was designed for The Hague Post Office. Guests who pay the £12.50 ($15) ticket price can work their way through the Postbox maze, where they’ll discover exhibits from London’s Postal Museum and recordings placed by Letters Live, which stages events where celebrities like Benedict Cumberbatch and Kylie Minogue read words from public figures such as David Bowie, Gandhi and Charlotte Bronte. The maze will operate from Sept. 13 to Sept. 16, in the middle of London Fashion Week (the brand is still part of the official London Fashion Week schedule).

Ticket buyers will also be able to shop the Postbox collection and limited-edition “Postbox Maze” merchandise at the event. The brand declined to share how much it spends on fashion week.

Hindmarch’s consumer-centric approach to fashion week is one example of how luxury brands are evolving their marketing strategies to stand out in a crowded luxury market.

“Brands at the forefront of luxury and fashion trends have changed the way they present their new collections, using formats that bring consumers to play a more important and active role,” said Luca Solca, head of luxury goods research at Bernstein. “This makes sense in the era of social media — the more people, the more likes, the more Instagram photos, the better.”

Last season, alongside the main immersive Weave Project installation, the brand also ran an interactive weaving activity, which proved very popular. “At any one time we had between 80 and 100 people sitting on the floor learning to weave,” said Hindmarch. This prompted the brand to host a more formalised workshop this season with calligraphy lessons and letter writing stations for attendees.

Luxury is more democratised than ever. It’s about initiatives that bring the consumer into the experience, rather than it being closed-off.

In some ways, the digital revolution has made fashion week more accessible to consumers than ever — but mostly via social media. This can result in consumers actually feeling even more excluded. Staging an experiential event helps create a memorable brand touchpoint for individual customers, heightening engagement while amplifying brand exposure.

“Today, luxury means something very different to most consumers, especially Gen Z and Millennials. Luxury is more democratised than ever and it’s about things like co-creation, personalisation, initiatives that bring the consumer into the experience, rather than it being closed-off,” said Laura Saunter, senior editor at WGSN Insight. “Experiences should give the customer a reason to want to interact and engage with a retailer in a way that can bring value to their life, rather than simply being for the ’gram.”

Unlike a digital campaign where it’s easy to track the user journey and individual transactions, off-line brand experiences can be difficult to quantitatively measure. As a result, it’s key to put customers at the heart of the experience, said Hindmarch.

“Listen to your customer. Start everything based on your customer, and don’t worry about the industry, do what your customers wants — that actually makes sense,” she said.