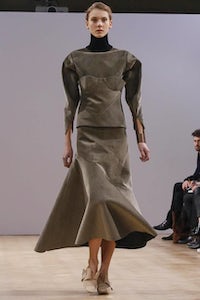 LONDON, United Kingdom — J.W. Anderson took the audience for yet another intellectual ride with his Autumn/Winter 2014 collection. In plebeian terms, if "pretty ugly" were a thing, Anderson nailed it. Citing English modern painter Graham Sutherland as a reference point, Anderson appropriated the queasy colour palette of alien green, murky mustards, watery browns, moss and greys from Sutherland's paintings into his collection. Anderson went further by employing "ugly" fabrics like corduroy, black satin and a two-toned seaweed woven mix as a personal challenge this time. Admittedly, some of these fabrics are among his most abhorred.

In an interview backstage, Anderson wanted the show "to feel a bit disturbed," citing "the idea of a shrivelled arm" and of "this contorted figure" in Sutherland's many figure drawings, such as in 'Standing Forms II'. This conceit of contorting the body translated into the bending and melding of style lines and the transferring of the weight of garments to parts of the body where they feel a little unnatural. It is an extreme way of challenging codes of dressing that goes beyond just deconstruction.

The part of the garment that endured the full extent of this contorting process was the neckline, where Anderson experimented with many different forms, from roll necks to structured high collars, asymmetrical, draped, deep cowl, off shoulder, ruching, oversized — to name a few. The waistline of the dresses also shifted rebelliously with each look: drop waist, Japanese "obi" sash, and at times completely absent. The absurdity of these styles were enhanced by rather grotesque shoes and the eerie theremin-rich soundtrack by Michel Gaubert.

A collection based on twisting the body was sported before, albeit in 1997, when Alexander McQueen showcased a collection inspired by Hans Bellmer's 'La Poupée'. Back then, the clothes were sculpted to stretch and disfigure the body as we know it. The resemblance was especially felt in looks 4, 5 and 6 which took us back to Nick Knight's Visionaire cover featuring Devon Aoki. Anderson's take however was much more muted and aligned to his own visual handwriting.

In its entirety, the J.W. Anderson collection displayed gusto that likens it closer to art. The way he used the runway as a canvas to challenge the way we think about clothes and ideas about taste — either wittingly or otherwise — is a testament to the sheer rigour of his creative wit. Anderson shows are bold statements that are quickly turning into landmark events at London Fashion Week.