PARIS, France — When famous ‘besties’ Kendall Jenner and Gigi Hadid opened Balmain’s Paris fashion show earlier this month, wearing hairpieces in each other’s natural hair colour — Kendall went blonde, while Gigi went brunette — it sparked an avalanche of press and social media mentions (not surprising given their combined Instagram following of roughly 67 million). But much less known is the origin of the wigs, made by the under-the-radar Balmain Hair, once a licensing business, which its owners say now operates “like a division of Balmain” and has plans to expand.

In the 1960s and 1970s, perruques — wigs in French — were very much in fashion. Indeed, the likes of Anne Klein, Yves Saint Laurent, Pierre Cardin and Christian Dior had their own wig lines. According to a 1971 article in Vogue magazine, 35 million wigs were sold that year. Seeing an opportunity, Pierre Balmain, the French designer who founded the house of Balmain, sought out Dick Guliker, a Dutch wigmaker, to create a range of hairpieces that complimented his clothing designs. In 1974, Guliker started Euro Hair, licensing the Balmain name. But during the 1980s and 1990s, the popularity of wigs waned and the company focused on hair additions such as extensions and wefts distributed via a network of professional salons. 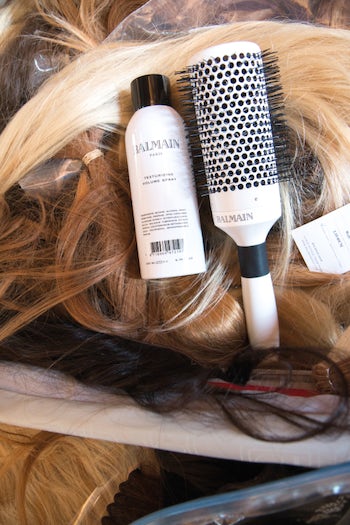 In 2000, Alain Hivelin — the former chairman and majority owner of Balmain who died in 2014 — developed plans to revive the brand and the Guliker family decided to enter into a direct partnership with the company, changing the name of their company from Euro Hair to Balmain Hair. Although they remain separate entities, the two companies are “more or less married,” says Steward Guliker, Balmain Hair’s current CEO and son of the founder. Today, he runs and owns the company with his brother, Richard, who also works with Rousteing and Harlow as an “art and research and development director” focusing on product innovation and visual branding.

“We are very excited about the energy that Rousteing has generated,” says Steward Guliker, referring to the young creative director, who replaced Christophe Decarnin in 2011 at the age of 24. On the back of this energy, Guliker is bullish about the growth of Balmain Hair, which offers haircare products and styling tools, as well as high-end wigs and weaves, a space in which most major luxury fashion brands have no significant presence. (The company declined to reveal data on the size or growth of the business.)

While Balmain’s product — moisturising shampoos cost $16, while ceramic hairbrushes cost $48 — targets a specific niche, the overall market for premium haircare is estimated to be worth a whopping $8.5 billion in 2016, according to Euromonitor. What’s more, demand for wigs and hairpieces is set to grow due to “favourable social and fashion trends,” according to a recent study by Ibisworld.

“What I learned from my father is that hair is emotion,” says Guliker. “When we see people buying hair, they want to feel it and they want to smell it. The fact that you can create an instant makeover with a new hairdo, you’re already in the heart of the consumer.”

“It’s quite a unique proposition for professional hairdressers to see that new [luxury] angle,” he adds, referring to the company’s primary distribution channel. Today, Balmain Hair is sold in 5,000 hair salons all over the world. Last year, the company launched an initiative called “Prestige Salon” to place its products in high-end, fashion oriented salons, of which the brand now counts 200, mostly in Western Europe.

Balmain Hair has also been establishing a presence outside salons at premium retailers “where it helps us connect to the fashion angle, but at places where it doesn’t hurt our stylists next door,” says Guliker. The brand is currently stocked in stores including Colette and Le Bon Marche in Paris, KaDeWe in Berlin, Harvey Nichols in Hong Kong and Net-a-Porter online, where Balmain Hair is a top seller in its category, according to the retailer. The company also operates three shop-in-shops, including one in Amsterdam’s Bijenkorf. And, just two days before the most recent Balmain show, Balmain Hair opened L’Atelier Balmain Hair Couture, an appointment-only consultation and custom hair service on Rue Royale in the 8th arrondissement of Paris.

But Guliker has his sights on the American market — where the company is currently present in 300 salons — with a four-year strategy focused on targeting high-end hair stylists. And, of course, there’s the country’s large pool of selfie-obsessed millennials, many of whom are fans of Jenner and Hadid and apt to remix their looks more frequently than previous generations. “We already see it in our business today,” observes Guliker. “Changing your lips from purple to red, that’s nice and you can get a reaction. But changing your hair — it’s a shock effect. That’s what people like to do and be noticed.”

“They were literally exposed to millions of brand impressions before they reached ten years of age. Added to that was a system-wide [media and education systems combined] cultural emphasis on the importance of individuality [think Barney's ‘everyone is special’ en masse],” says Josh Tickell, filmmaker and expert on the millennial generation. “Combined, this brand frenzy and self emphasis have transmuted into a generation that mirrors these cultural values through self-branding and self-broadcasting at never before seen levels.”

Whether Balmain Hair can capitalise on this trend remains to be seen. But it’s surely in the right place, at the right time.