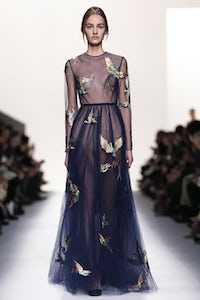 Valentino, Autumn/Winter 2014:
"It had the puritanical underpinnings that the designers have injected into their vision of Valentino, and yet their chosen prints, graphic circles and demi lunes to start out the show and butterflies or a menagerie of animals to finish, gave the garments just the right amount of energy and whimsy." See full show.

Alexander McQueen, Autumn/Winter 2014:
"This collection by Sarah Burton felt both closer and further away from the work the brand’s founder produced during his lifetime. What was different was Burton’s move to make her garments, while just as theatrical and couture in their execution, much more forgiving in construction." See full show.

Chanel, Autumn/Winter 2014:
"At Chanel this morning, designer Karl Lagerfeld out did himself once again by recreating an entire supermarket inside the gigantic main hall of the Grand Palais." See full show.