The Italian luxury brand’s men’s and women’s collections will be shown together during Milan Fashion Week in September.

The Italian luxury brand’s men’s and women’s collections will be shown together during Milan Fashion Week in September.

MILAN, Italy — Bottega Veneta will show its men’s and women’s Spring/Summer 2017 collections together as part of an integrated runway show to take place during Milan Fashion Week this September. The show will celebrate the brand’s 50th anniversary, as well as 15 years under the creative direction of Tomas Maier.

"2016 marks an important year for Bottega Veneta and it deserves a proper celebration in view of [the brand's] further development," chief executive Carlo Alberto Beratta told BoF. "Showing women and men together is quite an organic move for us. Tomas Maier's vision is of Bottega Veneta as a lifestyle brand, built on both genders, and it has been like this for the last 15 years of his creative direction," added Beratta. "He actually already included some women's looks in the Autumn/Winter 2016 men's show in January." 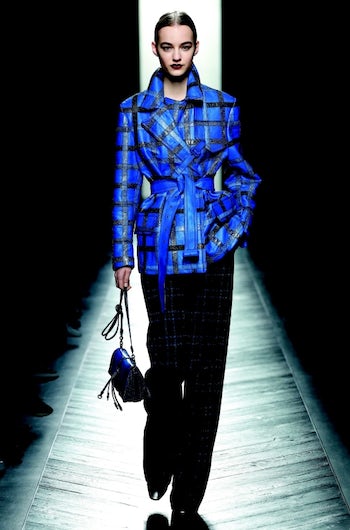 Whether Bottega Veneta will take this approach beyond Spring/Summer 2017 remains to be seen, however. “I believe this approach may be continued, moving forward into 2017 as a natural evolution," said Beratta. "Our aim is always to decide in accordance with the brand's philosophy in any step we take, so the factors in making this decision will be what makes more sense for the brand itself. We are not in a rush, we would rather pursue an organic evolution."

As for the coming season, Bottega Veneta will not be showing its men’s collection on the runway during Milan Men's Fashion Week. Instead, the collection will be revealed to press and wholesale partners with a presentation.

Much like Gucci, also owned by French conglomerate Kering, Bottega Veneta will not adopt direct-to-consumer shows — designed to deliver so-called ‘fashion immediacy’ by linking runway presentations with retail sales — and remains committed to a traditional ‘see now, buy later’ strategy. "Our commitment to the unique art of our artisans and to the incredible quality of our materials will never change, as well as the timeless design of our pieces — which are never linked to a specific season," explained Beratta. "Time is essential to achieve these qualities for each of our products, and we will never compromise on this out of respect for our core values and identity, which are the reason our clients are loyal to our brand."

The announcement comes as several major brands have integrated their women’s and men’s shows and the industry at large grapples with a number of systemic issues, including the timing of runway shows and what some see as the misalignment of the industry’s communications and retail cycles at a time when runway shows have become consumer marketing spectacles.

For more on how fashion brands are adapting their approaches, see BoF’s guide to fashion immediacy.