SEOUL, South Korea — Nestled in the curvilinear majesty of Zaha Hadid’s Dongdaemun Design Plaza, Seoul Fashion Week has the air of a festival. On the ramp down to the show venues, fashion enthusiasts, championing the now-notorious Gangnam style, photograph each other incessantly, while giddy screams emanate from the VIP entrance as fans wait to catch glimpses of K-Pop and K-Drama stars.

This season, amid the hysteria, 140 international buyers and 15 members of international press were invited to attend the event, while over 180 other international buyers attended of their own accord, predominately from China, Korea’s most important export market. Jung Kuho, Seoul Fashion Week’s executive director, has succeeded in putting the event on the radar of a number of influential individuals and businesses. Buyers from Saks Fifth Avenue, Selfridges, Harvey Nichols Hong Kong and Parisian concept store L’Eclaireur, joined editors from US, Italian and French editions of Vogue, GQ, Dazed and Another Man.

Although securing their attendance was undoubtedly made easier by sponsorship and government support (and the flights and hotels they pay for), K-Pop, K-Drama and a boom in western interest in Korean cosmetics, mean that ‘Brand Korea’ has never been stronger. Indeed, Seoul Fashion Week began with Vetements’ collaboration with Matchesfashion.com, whose flash sale in a warehouse pop-up on the outskirts of Seoul was attended by over 700 people (including a number of coach parties). A celebratory dinner was hosted by Vetements chief executive Guram Gvasalia and Matchesfashion.com chief executive Ulric Jerome and chairman Tom Chapman. 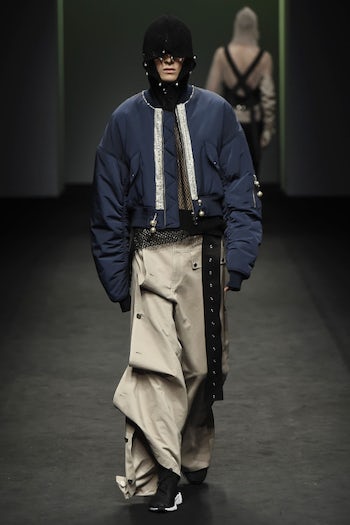 “I really think that Jung Kuho has done a fantastic job of making Seoul Fashion Week really fresh with a great focus on young talent,” says Jeannie Lee, womenswear buying manager of the designer galleries at Selfridges. “There is a very pure love of fashion and a focus.”

But how big an opportunity does Seoul Fashion Week represent, and what challenges does K-Fashion face as it seeks to go global?

The Evolution of K-Fashion

As a nation of 50 million people accustomed to buying world-class domestic brands, South Korea is in an enviable position.However, Korea’s strength in apparel manufacturing is counter balanced by its comparative weakness building fashion brand identities with global appeal.  While Korean brands in the automobile and electronics sectors may be famous the world over, few Korean fashion brands have cracked the global market like their Japanese competitors.

“Because our internal market is so big compared to other countries, one brand could make $150 million by only serving the internal market,” says Jung Kuho. “But now, the young designers are starting to expand to the global market.”

One of the positive consequences of South Korea’s relative self-sufficiency is a strong domestic manufacturing base, situated in a concentric ring surrounding the Dongdaemun Design Plaza (or DDP, as it is known locally).

“The original reason my curiosity about Korean fashion was spiked … was Korean production,” says Eric Jennings, vice president and fashion director, menswear, home and beauty at Saks Fifth Avenue. “I was so impressed with the production of the Korean brands that I was seeing in the tradeshows in New York and Europe.”

The Korean market’s popularity with price-sensitive Chinese tourists and the idiosyncrasies of Seoul retail haven’t helped. “The retailers in Korea don’t [technically] buy Korean product,” says Jung. “It is also all bought on consignment, so it is very difficult for young designers to build up brand identities in Korea.”

However, international buyers expect to see strong brand identities, emphasises Nathalie Cazeaud Hillaire of Paris-based MC2, which was the first international showroom to take on Korea’s most established designers, Wooyoungmi and Juun J. “The Korean brands that are showing in Seoul and only in Seoul are a little bit lost in Paris or in London,” she says. “Last year, I had a conference with the designers and I explained that they have to understand when they arrive in the European and American fashion capitals that their competitors are totally different. Here [in Korea], they don’t mind about copies and there is a focus on discounts and low prices.”

There is a lot of new talent in Korea and with that comes the need for a few seasons for the DNA of a brand to really gel.

But the somewhat derivative nature of the contemporary market is not limited to Korea, says Selfridges’ Lee. “That is true internationally, in Italy, the US, the UK, France. There is a lot of new talent in Korea and with that comes the need for a few seasons for the DNA of a brand to really gel. This is my second time attending and from last season to this season you definitely see the progression.”

The presence of more luxury ready-to-wear brands at Seoul Fashion Week could make all the difference. “There are luxury brands in Korea [but] they are just not showing at the DDP," Lee adds. "Luxury should be part of what is present in the shows to elevate the whole fashion week.”

Developing Designers for a Global Market

Labels including Blindness, Kye, Push Button, FleaMadonna and Dgnak, which celebrated its tenth anniversary this season, are leading the way at Seoul Fashion Week, and Jung is currently focusing on two strands of his strategy to guide designers on the complexities of the international market and to increase global awareness of Korean fashion.

Seoul Fashion Week’s 10 Seoul initiative, for instance, supports 10 Korean brands with government funding and an international retail stockist. “What I want to do is show Korean fashion product in major global stores, within the retail experience,” says Jung. “The first season was hosted by L’Eclaireur in Paris, the second, that is going on now, is with Excelsior in Milan ... I want the designers to have a feel of the actual retail market, so that they can get feedback from the customers and see the standard of their competitors.”

Another key initiative is the appointment of 10 international mentors, including Jennings, Cazeaud Hillaire and Isabella Burley, editor-in-chief of Dazed and Confused. “We invite mentors from all over the world. Half of them focus on promotion and half of them focus on the business side, every season, they come over, they give us advice and give seminars to the designers,” says Jung.

Although the mentorship is somewhat intermittent, taking place only during each Seoul Fashion Week, Korean designers’ lack of awareness regarding global markets and the structure of the international fashion industry means that the knowledge and insight shared is invaluable.

“For example, sometimes in the past they followed the trends of the season too much. From one season to another a designer could totally change direction,” says Cazeaud Hillaire. “This is very problematic for a buyer. To buy a collection you need to see a designer’s collections for at least three seasons. Whereas the [emerging Korean designers] expected the international buyers would be purchasing immediately.”

The strategy seems to be working, albeit slowly. “To Jung’s credit, getting more of us here is going to solve these problems,” says Jennings. “It is not going to change over night; it will take many trips and many mentoring sessions, many seminars with the designers. With the Korean brands that we do work with, it does take a lot of communication when you are forging these partnerships. The more we come, the more understandable it will be.”

In addition to the action on the runway, a successful fashion week must combine the press hook of the shows with an opportunity for buyers to do real business. “The first goal is to show what kind of character K-Fashion has,” says Jung. “After that we are focused on creating a real platform for buyers from the global market. That is why we started a fashion week with a trade show.”

The trade show, situated in the subterranean levels of the DDP could not be closer to the action, a fact well appreciated by buyers. “That to me is key," says Jennings. "It makes everyone’s life easier.”

There is room for improvement, though. “The experience for the buyers was a little bit awkward due to communication. I think having translators would be hugely beneficial for the trade show,” says Lee, who observed that the trade show lacks guidance with regards to merchandising. “There is a lack of categories. They don’t have enough knitwear and other simple things, like the balance between tops and dresses," she says. "[Another] key issue is sizing. This is very challenging because the sizing is graded to Korean people and it is very different to the global market.”

We are focused on creating a real platform for buyers from the global market.

However, Seoul Fashion Week’s position at the end of the buying season will always represent an uphill battle. “Timing for us is critical,” says Jennings. “Seoul Fashion Week can best help emerging design talent by assisting them to spread their wings earlier, to get out in front of American and European buyers elsewhere.”

Nonetheless, Selfridges' Lee is positive about Seoul Fashion Week’s ability to evolve into a place to do business. “If you are at the end, you are going to have the least amount of the budget, that is just how it goes,” she says. “But it is not that far away from Paris Fashion Week, and we now know that as a store we are going to Seoul Fashion Week [so] we allocate a certain amount of our budget [in order to] represent Korean fashion in store. Seoul Fashion Week just has to have enough of a presence so that the buyers from the bigger department stores actually think to allocate and reserve money.”

A star designer on the schedule is a tried and tested way to entice international buyers to attend and allocate budget. “Raf [Simons] showing in New York — that is a game changer for NYFW Mens,” says Jennings. “What Pitti Uomo has done such a great job of doing is bringing in a star designer to their fashion week each season, I saw Raf [Simons] there, I have seen Gosha there…”

Jung agrees. “Every business market you have to have a star. So what I am doing, I am trying to create a star here. I can’t make everyone a star here, but I can pick the right person to become a star. I have someone in my mind, but I cannot reveal it yet.”

What is clear is that the city of Seoul and the Korean government are putting weight behind Seoul Fashion Week. In the context of slowing exports, which dropped from an average of 4.4 percent between 2001 and 2011 to 2.8 percent in 2016, K-Fashion could be a crucial growth vector for the South Korean economy.

“There is definitely a positive future,” says Lee. “There are these other factors, which are a point of concern as a buyer, but they are addressable.” Putting budget behind her beliefs, Lee tells BoF that Selfridges is working on “an exciting project with Seoul Fashion Week” scheduled for Autumn 2017.

Similarly, Jennings is optimistic. "We carry Plac, Tea Library, Juun J and we are now in talks with Wooyoungmi and Solid Homme," he says. "It can take over a year of discussions and negotiations to figure out the back of house, the logistics, the timing. But we feel strongly that there is a real opportunity with Korean brands, and we are willing to put in the legwork and take the time to get it right.”

There is little doubt that K-Fashion, the fourth Korean export wave after K-Pop, K-Drama and K-Cuisine, is irrefutably swelling.

Disclosure: Robin Mellery-Pratt travelled to Seoul as a guest of Seoul Fashion Week.

South Korea Climbing the Ranks of Asia's 'A League'