The Council of Fashion Designers of America (CFDA) is considering bold plans to restructure New York Fashion Week. It is long overdue. At seven days (not including the NYFW Men's shows) the current schedule is bloated, too long and highly varied in quality.

The changes could include the return of Proenza Schouler and Rodarte, who decamped to Paris last year to show on the haute couture calendar and may now join designer Alexander Wang in his recent decision to shift the timing of his shows to December and June. The plan has also been discussed with The Row, Jason Wu and Prabal Gurung, CFDA president and chief executive officer Steven Kolb revealed to BoF.

The move to Paris offered Proenza Schouler and Rodarte one of the world’s grandest fashion stages, as well as guaranteed access to top editors and buyers. But it was the timing of the city’s couture week, in January and July, that yielded the most advantage, allowing them to align their main lines with the lucrative sales period for pre-collections, when wholesale buyers spend about 80 percent of their budgets. The schedule also gave designers more time to deliver garments to retailers and ensured items would live on the sales floor at full-price for a longer period.

“When they announced they were going to Paris, the story to me was less about them abandoning New York for Paris and more about a shift in business model,” explained Kolb. Now, the CFDA is aiming to offer designers some of the same advantages here in New York, with a stage for shows in December and June.

For now, the plans are far from crystallised. “It’s like a house of cards, it’s standing but one strong wind and it could fall apart,” said Kolb. “I’m trying to see who wants to commit to the idea of June this year or else next year. Having said that, we are not by any means saying this is the direction everybody should go, because there are brands that feel like February or September are right for them.”

Indeed, some of the biggest brands on the New York schedule remain unconvinced. Certainly, major labels whose strategies are weighted towards direct-to-consumer sales have less to gain. “But there was enough interest from an influential group of designers to at least pursue it,” said Kolb.

“It will be messy for a while,” he acknowledged, adding that some brands would opt to continue showing in February and September, while others would shift to December and June. But is such a scenario sustainable?

“Right now, it’s this state of flux,” said Kolb. “But I don’t see it as a challenge; I see it as opportunity and experimentation. At some point, it’s got to settle down into something — and maybe it will settle down to December and June.”

“It’s like Helmut Lang 20 years ago when New York was the last city to show and Helmut decided to show here and go first, before Europe," he added. "Calvin went along very quickly and then everybody else followed. So, if there’s a handful of designers who migrate to the new schedule and have some success, perhaps others will follow.”

If all goes to plan, the shift could prove a big step forward for New York Fashion Week. But timing is only one of the ways in which the platform could be optimised. There’s also the issue of length. Do the New York shows really have to span seven days? While the week is currently one day less than it used to be, further tightening the schedule would be more efficient and impactful for everyone involved. Both Paris and Milan have recently shortened their schedules.

Then, there’s the question of curation. “Traditionally, we’ve been much more democratic, much more open to who shows and how,” said Kolb, comparing the composition of New York Fashion Week to fashion weeks in Europe, which are more centrally planned and tightly curated. While New York should preserve its unique ethos, greater curation would lead to better quality and make a slot on the New York calendar mean that much more.

Let’s hope this is just the beginning of more experimentation in New York — a reinvention couldn't come soon enough.

Tapestry shares rise after earnings beat expectations. Tapestry is on the comeback path after a robust holiday season: same-store sales for Coach rose 3 percent last quarter, as executives try to elevate its image by reducing markdowns. A comparable sales decline at Kate Spade comes as the brand retreats from heavy promotions and a pullback from some department stores. The group raised its full-year profit forecast to a range of $2.52 to $2.60 a share.

Michael Kors' earnings show rebound efforts working. Shares of the company rose 8 percent, after it reported a much smaller-than-expected drop in same store sales, which fell 3.2 percent in its third quarter ending December 30. Kors' total revenue rose for the second quarter in a row — 6.5 percent to $1.44 billion — helped by Jimmy Choo (the footwear maker contributed $114.7 million in revenue).

LVMH Luxury Ventures backs Stadium Goods. The offshoot of the fashion and luxury-goods conglomerate, founded in 2017 with the aim to fund emerging brands in exchange for a minority stake, has announced it will back Stadium Goods. The New York-based sneaker and streetwear store has grown quickly since launching in 2015 and has raised $5.6 million in investment to date. The announcement follows sneaker start-up Goat's news that it will be merging with consignment site Flight Club to become "the world's largest sneaker marketplace."

Shandong Ruyi buys Swiss luxury brand Bally. The Chinese clothing giant, which owns SMCP and Trinity, has bought a majority stake in Swiss luxury brand Bally for an undisclosed sum. Bally’s parent, JAB Holding, will retain a minority interest in the company, making it the only fashion brand that JAB has sold, which it will retain a stake in. (It has been offloading most of its luxury assets, selling Jimmy Choo to Michael Kors and Belstaff to Ineos in 2017.)

Christian Louboutin loses a round in the legal battle over red soles. The French designer is in court in The Netherlands to prevent the Dutch high street chain Van Haren from selling its own versions of his distinctive footwear. An advocate general at the European Court of Justice advised the court that Louboutin's trademark protection on the shade of red used on his soles might be invalid, which could mean that the designer may not be able to stop competitors from offering shoes with red soles in the future.

Coty reports better-than-expected quarterly profit. Net revenue rose to $2.64 billion from $2.30 billion, while net income more than doubled to $109.2 million, or 15 cents per share, in the second quarter ended December 31, from $46.8 million, or 6 cents per share, a year earlier. Coty's consumer beauty unit reported a 13.7 percent rise in sales, driven by a 11.1 percent contribution by Younique, the online cosmetic retailer in which Coty acquired a 60 percent stake last year.

Hermès sales growth slows, but remains upbeat for 2018. The French luxury-goods maker said that fourth-quarter revenues grew five percent year-on-year, slightly behind analyst expectations of six percent. Chief executive Axel Dumas said that this was due to the stock of handbags running low after strong demand earlier in the year. However Hermès, which is due to report full results on March 21, said operating profitability should be close to the level recorded over the first half of last year, when it hit a record 34 percent. 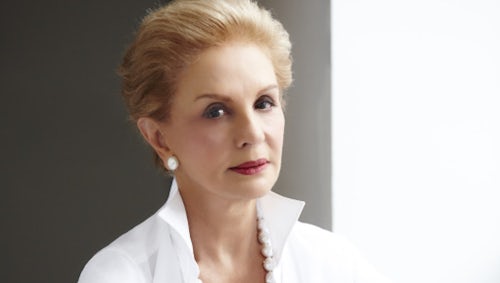 Carolina Herrera steps down as creative director. The namesake founder is taking on a new role in her company as global brand ambassador, from February 13. The appointment follows an uncomfortable moment for Herrera in 2016, when it was revealed that her former chief executive, François Kress, had planned to have her replaced by the former Oscar de la Renta designer Laura Kim. Wes Gordon, who joined Carolina Herrera as creative consultant last March after he shuttered his own brand, will assume the role of creative director.

Lululemon's CEO resigns after misconduct. The Vancouver-based maker of yoga pants and other athletic-inspired clothing said Laurent Potdevin fell short of the company's standards of conduct. Early reports from sources close to the company said the departure was related to a range of behaviour. Later sources told CNBC that it was at least partly related to a multi-year relationship with a designer at the company. Glenn Murphy, chairman of the board, is leading the company in a search for a new executive.

Macy's will be the first major US department store to sell hijabs. The department store chain has teamed up with Verona Collection to launch a women's modest clothing line, which includes dresses, tops, cardigans and hijabs, aimed at Muslim shoppers. The range will launch on Macy's website on February 15.

Snap tops estimates for first time since IPO. The company reported fourth-quarter revenue that jumped 72 percent, to $285.7 million, beating the highest analyst estimates and sending shares up as much as 31 percent in extended trading. Snap’s first year as a public company has been marked by hurdles, including the loss of its heads of product and engineering, while Facebook copied some of its most popular features for bigger audiences.

Global retail spending on AI to reach $7.3 billion by 2022. This will be up from an estimated $2 billion in 2018, as retailers target new ways of improving personalisation of the customer experience, according to a study by Juniper Research. JD.com and Fung Retailing, which oversees over 3,000 stores in Hong Kong and overseas, are the latest companies to form an AI partnership, where they will work to develop AI-driven retail solutions.

Walmart's tech incubator buys VR start-up. Store No 8, Walmart's technology incubator, said it bought virtual reality start-up Spatialand to build VR products for the retailer's stores and websites. The financial terms of the deal were not disclosed. The news comes as the retailer is seeking tech advancements to improve its in-store and online customer experience.