On the eve of the Marc Jacobs show, BoF speaks to set designer and longtime Jacobs collaborator Stefan Beckman, the man behind some of fashion’s most elaborate runway sets.

On the eve of the Marc Jacobs show, BoF speaks to set designer and longtime Jacobs collaborator Stefan Beckman, the man behind some of fashion’s most elaborate runway sets.

NEW YORK, United States — Marc Jacobs runways are true spectacles of showmanship. There was last season’s house, slicked a vivid shade of fuchsia, around which a parade of military surplus-clad models snaked. Before that, it was a vast chamber of low-hanging fluffy clouds, which might have been cheerful had they not been coloured a stormy grey.

“About that time, [Marc] was watching American Horror Story,” recalled set designer Stefan Beckman, the man behind some of fashion’s most intriguing, elaborate sets and a longtime Marc Jacobs collaborator. “He’s definitely an amazing showman in terms of what he thinks about. He thinks about the clothes, first of all, but he’s [also] thinking about the light, he’s really thinking about that girl. I think he’s similar to a photographer or director, someone like Steven Meisel, because he is thinking about who that character is.”

Tall and spry, Beckman speaks in the resonant baritone of an upbeat fitness instructor, punctuating his sentences with laughter. In some ways, he plays an analogous role in the lives of his clients and collaborators, helping them realise their creative ambitions and push preconceived boundaries. Since the mid-1990s, Beckman has conceived sets for a litany of editorial shoots, advertising campaigns and events for clients including Hermès, Chanel, Louis Vuitton, Alexander Wang, Calvin Klein, Estée Lauder, Italian Vogue and W. 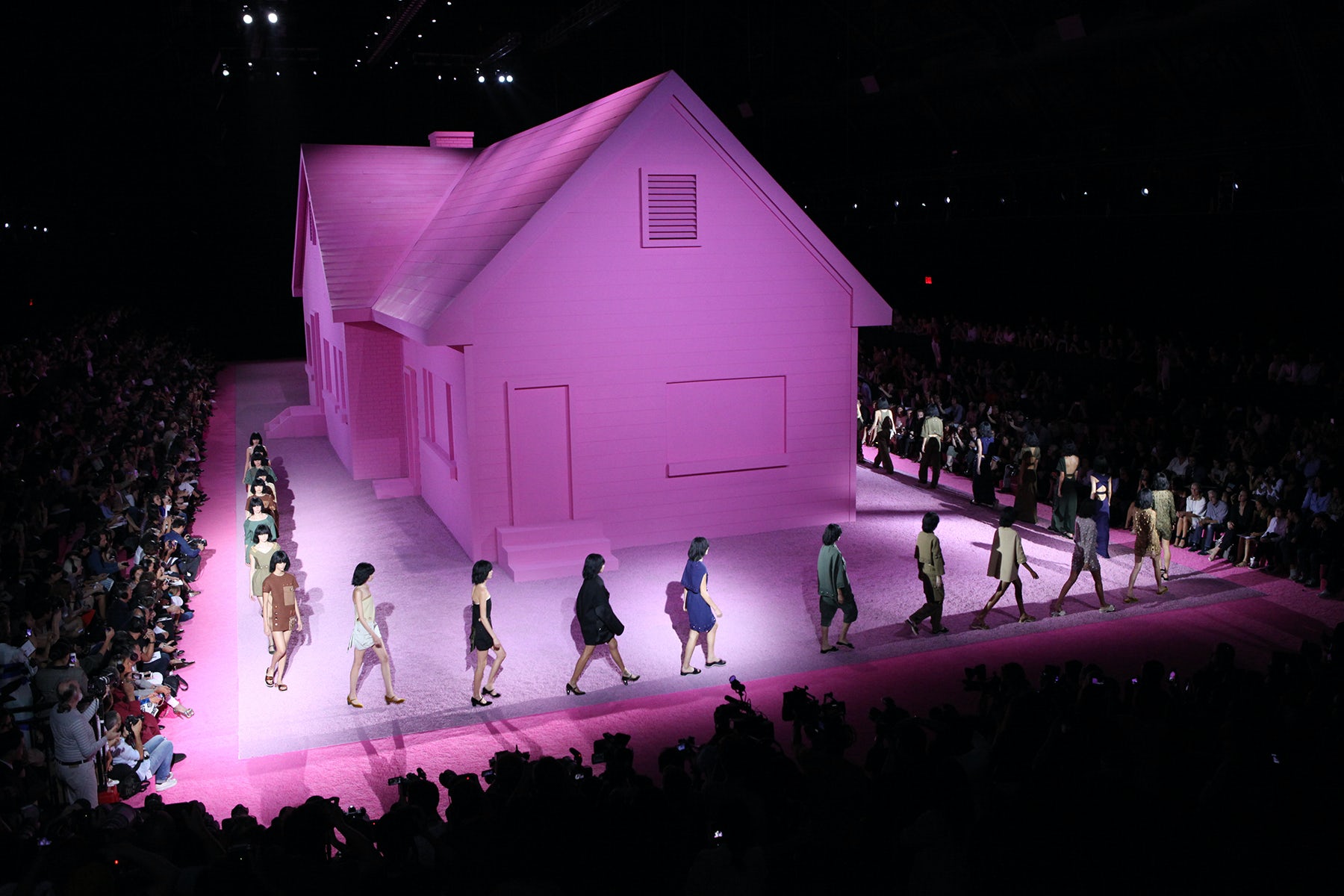 “The best thing about the business is that it’s a truly collaborative, working with people here, in my office, trying to come up with the best design. It’s really collaborative also with stylists, photographers, designers. That’s the coolest thing; you’re putting on a play together!” he enthused. His studio, nestled amongst fur wholesalers in a corner of New York’s Chelsea neighborhood, is tidy and spare, save for a floor-to-ceiling shelf stuffed with books and props. The room hosts his full-time staff of six, some of whom have been with Beckman since the start.

Part of Beckman’s success stems from his training in (and obsession with) film and theatre. Raised largely in Texas, Beckman studied film and theater at university in Austin before moving to Los Angeles to work in the entertainment industry, crafting props for the art departments of various television networks. The experience grounded his approach in storytelling, conceiving of sets and props while also considering lighting and camera angles.

Fashion is a giant cultural blender.

It was a way of working that would prove effective in the next decade of his career, as set design became a crucial component of notable fashion shows and imagery. “More brands and more people want to do something more visual to tell a story, which is really important. There was more of a need to evolve. People became aware of fashion and photography and visual things, so that need – doing a set or telling a story – became more important,” said Beckman. “I also think photographers like Steven Miesel and others told a visual story and pushed that whole aesthetic in so many houses.”

In the early-1990s, Beckman moved to New York and, without an extensive network or membership in any film unions, began helping out a stylist friend with shoots. “At the same time, one of my good girl friends worked at Harper’s Bazaar and I got introduced to Fabien Baron. It all kind of snowballed,” he said.

“I feel like the late-1990s was a good time because everything was kind of accelerating in fashion. It was always a huge business but the idea of doing a set or doing something visual became more important. There were more budgets and more need for that. There were a lot of magazines,” Beckman said. Indeed, that era saw a tribe of talented photographers, stylists and art directors converge upon New York. Through his subsequent work with Baron and others, Beckman met and began collaborating with photographers like Peter Lindbergh, Craig McDean and David Sims. 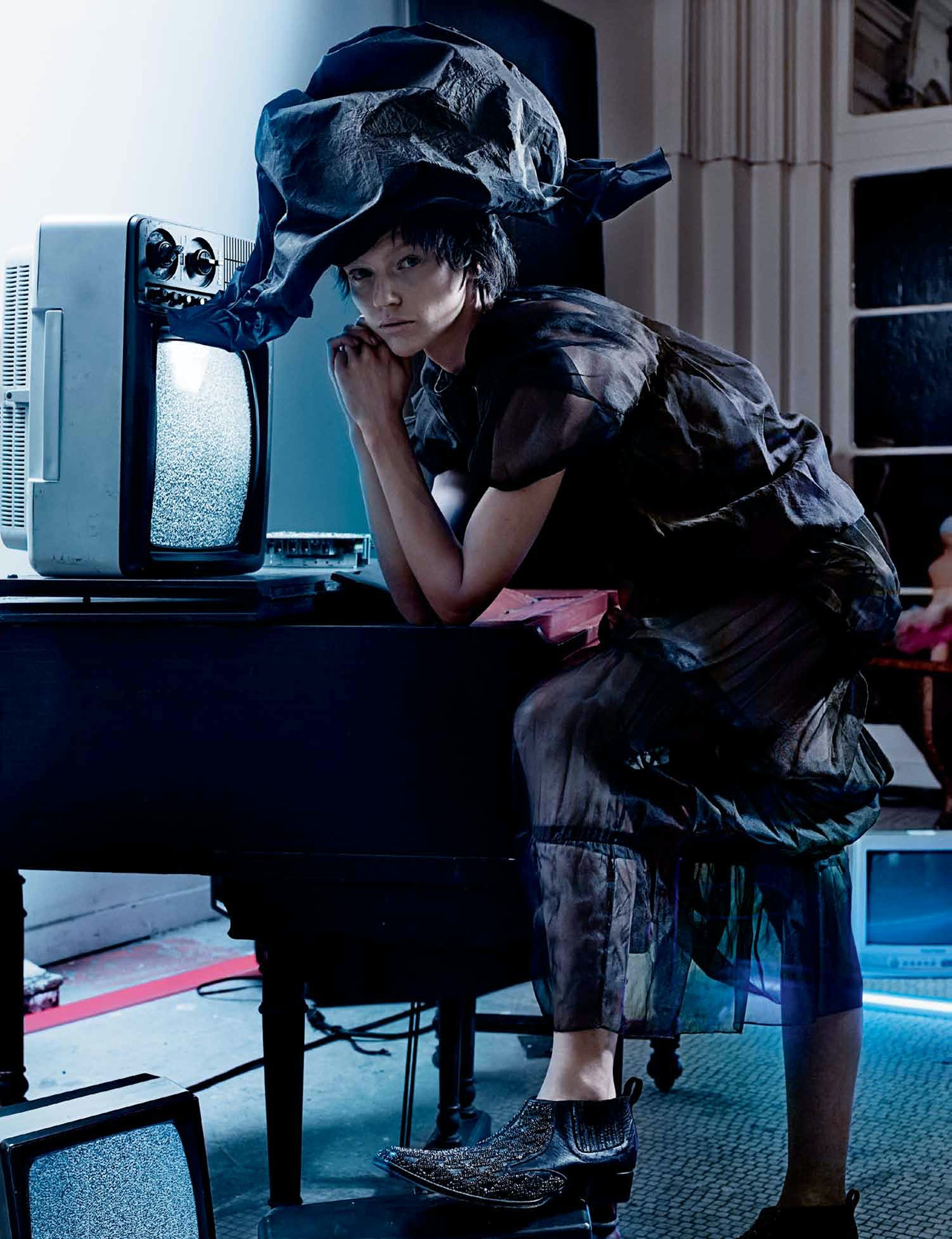 He was introduced to Marc Jacobs whilst working on the first Louis Vuitton campaign with photography duo Inez and Vinoodh. “Later on, he decided to do a set [for his show] and my name came up. I came in for a meeting, and the show was literally like six days away. We pretty much made a set in five days. And it just evolved from there,” Beckman said. Now, a decade later, Beckman is still crafting surreal, intricate sets for Jacobs, albeit at a slightly less frenetic pace. But only slightly — at the time of our meeting, less than one month from New York Fashion Week, Beckman had not yet convened with Jacobs to discuss his upcoming show.

The process often begins with little more than a hunch. “Sometimes it could be a visual of a shoot or something he has seen editorially. Or it could also be a shoe, or an attitude. I’ll come back with a few visual references that I think could be good conversation starters. A lot of it could generally be anything. Art, architecture, film, a bit of music, could be a dance performance…” Beckman explained. “He’s one of the few designers working with where mood becomes really, really important. And that could be in his head or what he wants to convey with his message. The mood is a great starting point and eventually you get there in many different ways.”

“It’s that juxtaposition of high and low, good and bad, so it’s not too precious, which I think is really important,because the last thing you want to do is to do a show where the girl is too precious, too perfect. It is a bit boring.” Indeed, Beckman deftly toes the line between commercial and conceptual, equally at ease constructing an eerie, rubble-strewn set for an Interview magazine photoshoot as he is staging an apple stand for a DKNY’s ‘Be Delicious’ perfume ad.

“Some things that are very commercial, or maybe they won’t let you go that far, but hopefully you’re going to try to get that far, anyway. Do you show really ‘out there’ things to that client? Maybe not. But it’s still the same working approach,” he said. “I feel like we’re lucky in that we work with people who want us to push things. I’d rather be ambitious and fail than not try at all.”

“I don’t want to say I’m jaded, like it was so much better before, but when you look at fashion advertising, there are ups and downs and years where it’s better than others. I think maybe we have too many images today,” he continued. In 2014, Beckman’s team alone undertook about 20 installations and events and somewhere between 50 and 70 editorials.

“With social media and everyone looking for the next Instagram moment, their own installations, shows have become more important than they used to be. Shows have always been important but I feel like fashion now has a world stage. There are so many more viewers. It used to be a select few and now my mother, my sister, they all know.”

“It wasn’t easy for me but you meet people and just keep going,” said Beckman, reflecting back on the arc of his career. “In the beginning, I was doing TV Guide covers. Like, seriously. You have to start somewhere. I was so happy to do those TV Guide covers with Whitney Houston and Michael J Fox. I was doing these cool mini sets and felt like I was on top of the world!”

“In New York, we are so lucky that there is so much good culture, architecture, theater. I think you have to be open to all those things, because fashion is literally a huge filter and you have to take all that stuff and figure out what’s interesting or how you can make it look interesting. It’s a giant cultural blender.”