With a major fashion show in Seoul, Chanel targets the South Korean market with a focus on ready-to-wear.

With a major fashion show in Seoul, Chanel targets the South Korean market with a focus on ready-to-wear.

In the heart of the futuristic Dongdaemun Design Plaza (DDP), Karl Lagerfeld’s collection was full of energy with structured, avant-garde silhouettes rendered in fuchsia, coral, orange, violet, celadon and mint green, melted into woven tweeds and textured cotton, but also into lighter fabrics such as shantung, linen, organza and tulle. There were lots of geometric patchworks as well as multi-coloured stripes combined with delicate floral and geometric marquetry-style embroideries. Some of the pleated miniskirts recalled the uniforms of Korean schoolgirls, while jackets were reinvented with large sleeves and rounded shoulders. Collars came flat, folded or notched — new territory for Chanel. In sum, Lagerfeld reinterpreted Asian sophistication with a contemporary spirit. And for his final look, the designer took inspiration from the traditional ‘hanbok’ dress, a woman’s garment from the Korean peninsula. 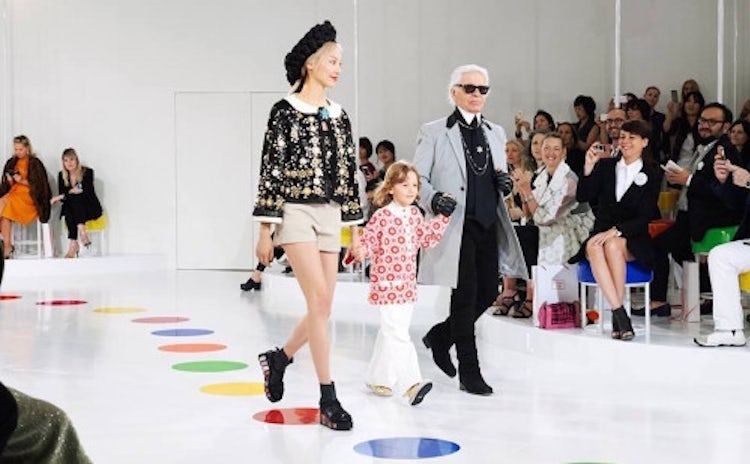 Following Chanel’s high-wattage shows in Singapore and Dubai, Seoul seemed to be a natural choice for this season’s event: South Korea is Asia’s third largest economy and represents a market that is a symbol of modernity. Seoul, besides being the country’s largest city, is a bewitching blend of ancient and modern culture, packaged in a surprisingly compact metropolis with outsized investments in cultural programmes and cutting-edge architecture.

“We chose Seoul for few reasons,” Bruno Pavlovsky, Chanel’s president of fashion, told BoF before the show. “Firstly, as an inspiration. Today, South Korea is the most influential country in Asia, with its energy and creativity, its youth culture and the pop music and TV celebrities, who have become incredibly powerful, even in China and Japan. These are all great sources of inspiration for Karl Lagerfeld.”

“There’s also a business reason,” he continued. “South Korea is a fast-growing market, a very interesting one, now also open to the Chinese and Japanese who like to travel here for tourism. South Korea has become a top destination in Asia. And, finally, there is the venue!” The DDP is a cultural hub at the centre of Dongdaemun, the city’s historic district, that one year ago housed a Chanel exhibition entitled "The Sense of Places” and was designed by Zaha Hadid, who also conceived the pavilion for Chanel’s Mobile Art travelling exhibition back in 2008.

Chanel entered the South Korean market back in 1992 with its first fragrance and beauty counter at Shinsegae, a major department store franchise, followed by its first fashion boutique in 1997. The brand now has nine fashion boutiques in the country and, in 2017, will open its first flagship store open in Cheongdam-dong (Gangnam-gu). “Korea is an important market for Chanel…Koreans have a very sophisticated taste and our objective is to sell them fashion and not only accessories,” added Pavlovsky. “The plan is to grow our business here and we are seeking opportunities to share our brand’s culture, history and values in a more comprehensive and interesting approach. And what better than staging a show in Seoul?” said Pavlovsky. “I was fascinated to hear that a Chanel handbag is still, traditionally, the most sought-after wedding present for a bride — and that, to me, gives an emotional link to the brand. With a full fashion show in Seoul, Chanel wants to demonstrate we are taking the Korean market seriously and it’s a strong sign for new customers to buy ready-to-wear.”

“We can create a stronger relationship with our customers thanks to the cruise and the Metiers d’Art collections,” continued Pavlovsky, explaining the brand’s tradition of staging off-piste fashion shows. “Twice a year, we travel somewhere different to be alone in a city and offer a special moment, a total Chanel experience. I see that as the best way to introduce the brand to new customers. That is hard to achieve in Paris during the pret-a-porter calendar, where the show is one among a hundreds more.” 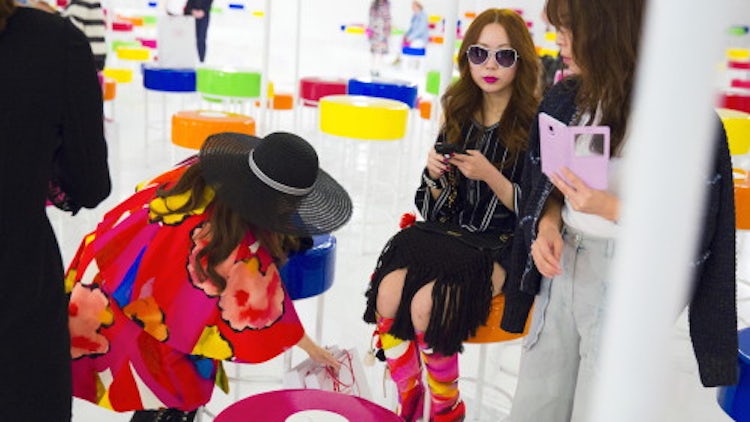 Chanel’s cruise and the Metiers d’Art collections also help to generate the kind of energy that drives footfall at retail. “With new clothes and accessories almost every two months, the customers like to come back to Chanel and feel the creative energy that is behind every collection. Customers don’t like to see the same silhouette for too long in the stores and they constantly need novelties,” said Pavlovsky. “The themed collections are also something that makes people talk about us even more: having a gimmicky handbag or a city skyline on a dress adds flair and fun to our fashion — that doesn’t need to be too serious. And Karl likes a bit of irony here and there.”

After the show, backstage, Amanda Harlech, who has been Lagerfeld’s right hand for a good twenty years, remarked: “Karl started to think about Seoul already a year and half ago and once he had that in mind, then the creative machine started rolling. The result is this great, colourful and younger collection. And not too accessory-led.”

“We must understand that Korea is all about a new start; it’s a young country that will dictate the future. But it’s also a country that has protected its own culture, in a very sincere way. And Karl has fully embraced that. The clothes tell all about this dichotomy.”