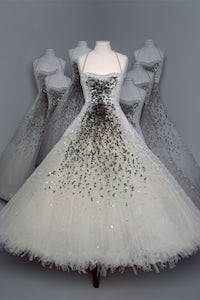 PARIS, France — The Surrealist art movement evolved in the aftermath of the last great pandemic, in the 1920s. In his pre-fashion career as a gallerist, Christian Dior promoted some of the movement’s leading lights, artists like Max Ernst and André Breton. So here we were, a hundred years later, and Maria Grazia Chiuri, the most recent claimant to Christian’s fashion throne, said that her response to our current viral nightmare was steeped in surreal dreaminess. “You can dream to build a different world,” she claimed in a Zoom preview. “Sometimes you might feel it’s impossible to realise that dream. But the Surrealists always believed that dreams were possible.”

Hers arrived in the form of a film by Matteo Garrone, the director responsible for “Gomorrah” and “Dogman”, cinematic benchmarks of soul-destroying grimness. They couldn’t be further from the fantasies of haute couture. No wonder Garrone was surprised when Chiuri asked him to produce a lockdown alternative to the elaborately staged spectacles that have shaped Dior couture shows. He claimed he knew absolutely nothing about fashion. But she was adamant he was her first and only choice. She must have been very convincing, because he said yes. 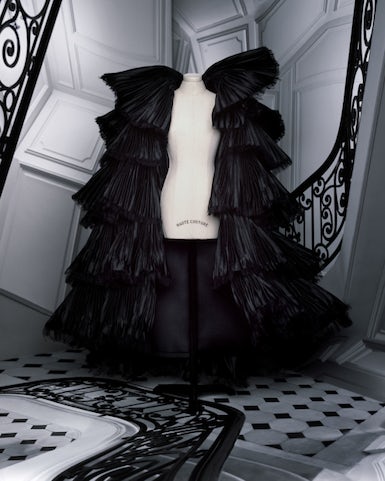 Maybe it wasn’t such an odd choice. Garrone’s filmography also includes “Tale of Tales”, a darkly extravagant fantasia featuring Salma Hayek at her ferociously regal peak. And Chiuri insisted even his darkest movies — just try and get “Dogman” out of your head after you’ve seen it – transform a terrible story into a fairytale. “All the time, there is poetry. And that’s what I was asking him to do now.”

True, “Le Mythe Dior” was poetic: nymphs and naiads, Venus, Narcissus, a faun….in a Zoom preview (is there any other kind these days?), Chiuri said she and Garrone were in complete agreement about its mythic core: Ovid’s classic Metamorphoses, Giambattista Basile’s 17th-century Pentamerone, Rome itself, the legends that mist its ancient ruins. One caveat, of course. Isn’t Dior a profoundly French fashion house? “The references were so French but we translated them with my language,” Chiuri countered. “And our way to work was so Italian.” By that, she meant a lot less formal. Garrone’s team was small. She herself was working from home in Rome throughout lockdown. “And when you are working at home, you forget you’re also part of such a big, important big company.”

In her time at the house of Dior, Chiuri has mastered the art of homage in her own particular way, giving a feminist spin to a house that was always dominated by male designers. Here, she looked at Surrealism through the lens of the women whose work helped shape the movement. Max Ernst’s lover Leonora Carrington and wife Dorothea Tanning influenced her beautiful colour palette. The images of women in water by Andre Breton’s wife Jacqueline Lamba inspired the watery fluidity of dresses which Garrone literalised in the mermaid who swam through his film. “The film mixed and translated all those elements in our way,” Chiuri clarified. “It was not literal, it was atmosphere.”

There was atmosphere plus in the scenes of Dior’s ateliers, where the famous petites mains were sewing doll-sized versions of the 37 looks that comprised Chiuri’s collection. In lieu of the usual extravaganza for press and clients, these miniatures will travel the world in a trunk, accompanied by toiles so that women who were unable to visit Paris during the quarantine can be fitted for the outfits they like. The city did this once before, right after WWII, when trunks full of scaled-down looks from French couture houses, a Théâtre de la Mode, toured the globe. In Garrone’s film, the trunk is a shrunken version of Dior HQ on the Avenue Montaigne. 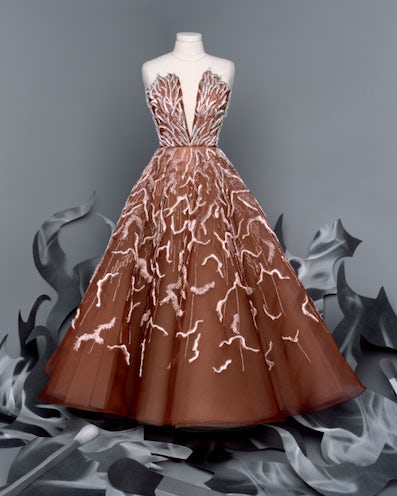 It is a quintessentially surreal notion. Inside the trunk are immaculately realized versions of an entire collection of the dresses whose fabrics and construction and embroideries and whatever else are – we are regularly assured – the very summit of fashion achievement. There is the dazzling lightness of a bar jacket in a silk wool shaped by almost invisible stitching, its matching skirt in an ephemeral plissé. There is a gossamer dress of instarsia-ed lace, and gowns of Delphic pleating. And there is the technical challenge of scaling them down to miniature, and finishing their interiors as precisely as if they were life-size. (Chiuri assured me the whole process took much longer than usual.) Scaling them back up to human size is a whole other level in couture achievement.

And now to the envoi: “This terrible time probably helped me to be more radical,” Chiuri told me, while she reflected on her three-month lockdown in Rome, with only her daughter Rachele for company and a constant bombardment of horrifying news from Northern Italy. That kind of declaration might prep you for something timely, and God only knows timeliness is all that fashion has on its side. And yet the film Chiuri made with Matteo Garrone – the way she chose to introduce her new collection to a Covid-compromised world – scarcely reflected the world that has formed in the upheaval of the last six months.

Poetic her designs may be, but there was nothing radical about them or the way she chose to present them, which was surprising in the light of Garrone’s participation. Radical poetry – now that’s a timely notion. Here, the poetry was less that of the provocative Surrealists than the dreamy, distant Pre-Raphaelites, pallid, bloodless, irredeemably white. It was profoundly disappointing because the mythic scenario that Chiuri and Garrone conceived could have been so potent if it truly engaged with nature in all extraordinary, multi-faceted, perverse richness. But no one ever said fairytales have to have a happy ending.

The images in this review, courtesy of Dior, are not the full Dior Haute Couture Autumn 2020/2021 collection. 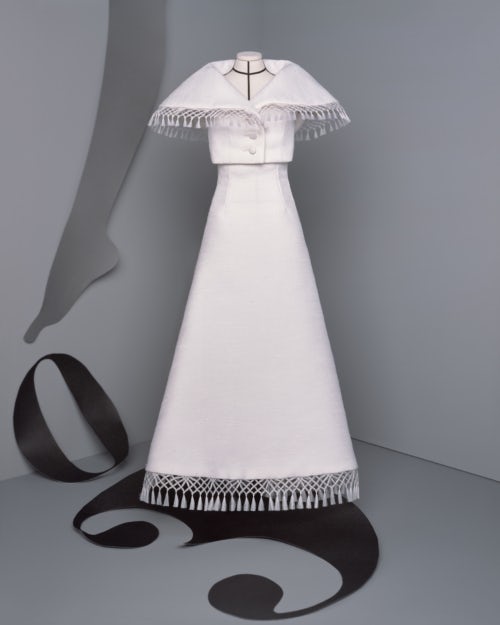 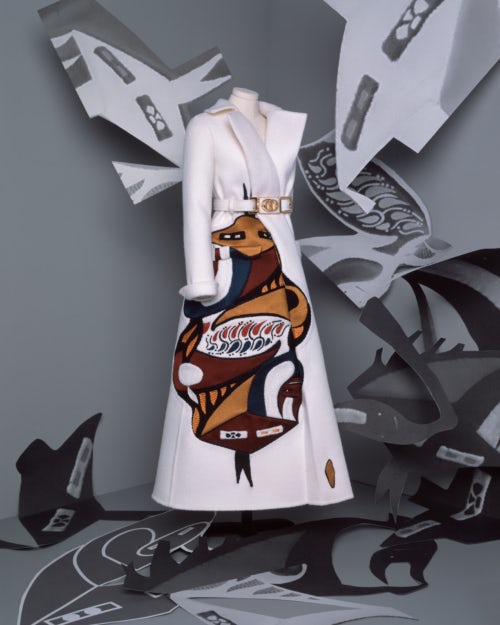 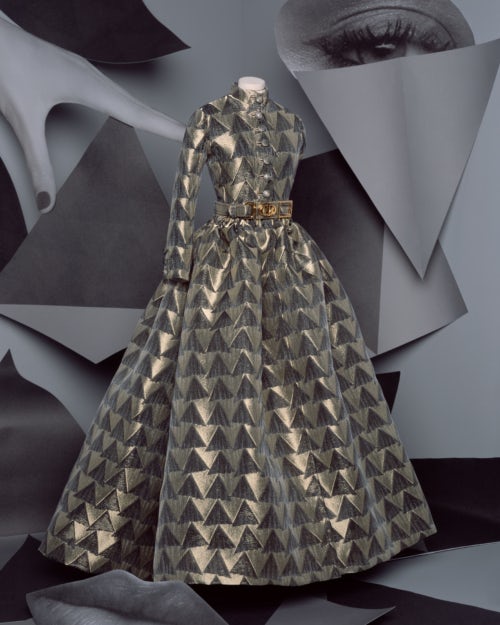 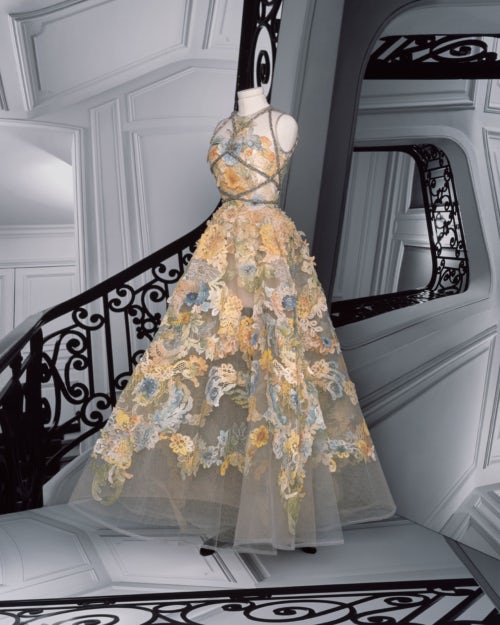 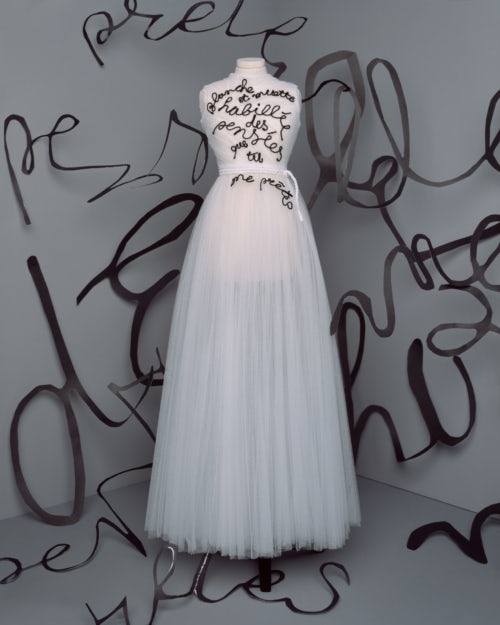