TOKYO, Japan — The Japanese market is going through an interesting phase at the moment. Data released by the Japanese government on Monday confirmed that the country’s economy shrank even more than was initially reported in the third quarter. However, according to a study by Bain & Company, a global consulting firm, the country’s luxury market, along with the United States, is poised for significant growth, thanks to local and tourist consumption.

While Chinese citizens represents the leading — and fastest growing — group of luxury consumers, when broken out by nationality, spending abroad more than three times what they do at home, Japanese citizens make most of their luxury purchases in Japan, a trend driven by the value of the yen, which has declined by nearly 30 percent since 2012. ‘Abenomics’ (the controversial Japanese prime minister Shinzo Abe’s economic recovery plan) has also managed to boost domestic sales (as did a spending spree early this year ahead of a rise in value-added tax).

In the global market for personal luxury goods, worth almost €223 billion this year, after the Chinese (who account for 29 percent of spending) and the Americans (22 percent), the Japanese represent 13 percent of spending. Is this a sign that mature markets are gaining back their key role?

Amid the excitement about a rising China, we often forget that Japan is still the world’s third largest economy. This could be one of the reasons why Paris fashion house Christian Dior chose to show its very first pre-fall collection in Tokyo on Thursday night.

Sidney Toledano, CEO of Christian Dior, was always keen on Tokyo. “After showing cruise in New York last May, Tokyo seemed to be the natural choice to follow. As soon as we started to announce it, the reaction from the local market was incredible,” he said. “Japanese are still wealthy. Despite the current recession and the high national debt, the Japanese have accumulated great savings and like to invest in luxury and high quality products.” Mr Toledano added, “At Dior we believe in Japan as a market. They like consistency here and we can provide that to them. Japanese customers are very selective, since they understand quality and traditions. We have plans to invest more in Japan in the next few years — Dior has already 22 shops and five flagship stores in the country. And it’s better to invest now and to surf the wave when it’s still taking shape.” In addition to domestic Japanese consumption, a recent rise in tourists visiting the country — mostly from China — is another driver of opportunity. 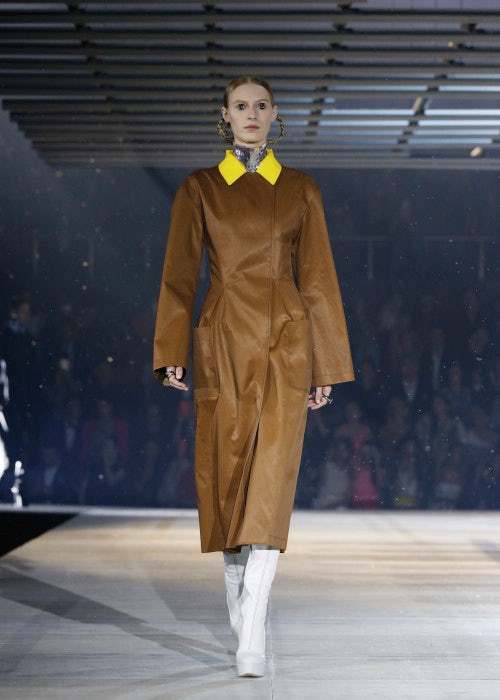 Mr Toledano knows this market very well. He came here the first time almost 32 years ago and he has seen the country evolve. “Japan is one of the few countries that still understands luxury. China is important for selling accessories, the US is more into ready-to-wear and Japan is the perfect combination,” he said. “We have decided to have a show in Tokyo because we want to talk to the Japanese customers, and show what Dior can do for them. Women in Japan are getting less conservative and the spenders are definitely younger. They are more savvy about quality and products, and that’s where we want to position Dior: a more dynamic, futuristic, high quality brand.”

“I have been in Tokyo many times,” said Raf Simons, artistic director of Christian Dior. “When I started my own line, already 20 years ago, I used to come two or three times a year. Japanese were my very first clients and I was often invited to come and meet them. I loved coming here, everything was so inspiring, from the people in the streets to the city architecture. I hadn’t been back for some time, so I was excited when the prospect of having a Dior show in Tokyo came up.”

“I love the fast pace of this city, its energy,” the designer added, smiling. “As soon as I landed on Monday, I went for a walk in the neighbourhood and could see how Tokyo is constantly changing. There’s no other place in the world where people take such liberties to express themselves with clothes and those urban tribes dress codes!”

Asked when he had started this collection, Simons replied: “I don’t really work in a natural, systematic way. I always have some new ideas in mind that sit still for some time, and other ideas might just come soon after one of the shows. With this collection, purely talking garments, I wanted to created new pieces to add to the Dior wardrobe. The Dior woman has already so many choices, in particular for special occasions. I wanted to make a collection that links more to reality. And thinking of Tokyo has inspired me a lot, not in the old and traditional, but in the new contemporary and urban ways.”

“I wanted to concentrate on the architectural aspects of Dior, that are in the DNA of the house, but that can also be found in (modern) Japanese fashion history — and move away from the ladylike connotations, thinking more of a younger, dynamic silhouette,” he added. “I have a more urban woman in mind, who likes to live the city, and can wear Dior from morning through the evening.”

In the collection, the house’s ‘Bar’ architecture is not abandoned, but revisited; its curvilinear structure is made more angular, graphic, Manga-like — and definitely more practical. “This time I wanted to concentrate on different materials and utilitarian fabrics,” said Simons, mentioning the collection’s wax-coated cottons, washed leathers and traditional English wools. “I wanted to give a strong outdoor feel, but at the same time a very glam aspect,” he said, referring to clothes that are sporty and urban on the outside while glamorous on the inside; a new type of utilitarian glamour and a concept that Simons has already started to introduce since he arrived at Dior two and half years ago.

The show was held at a sumo wrestling stadium and the set evoked a scene from Blade Runner, with smoke and laser lights. Most of the models wore turtleneck sweaters underneath sleeveless coats or dresses, some covered in sequins, which gave a metallic futuristic touch. There were plenty of Aran-style gilets and cable knit jumpers glammed up with embroidered sequins. The collection’s sporty elements were in its short jackets and zips up to the elbow; a sleek long coat over a minidress showed an elegant balance of proportions, and some wide men’s trousers came in leather. The knee length stretched leather boots were a stand-out look and recalled a chicer version of what girls wear in the Tokyo district of Shibuya on their afternoons out. 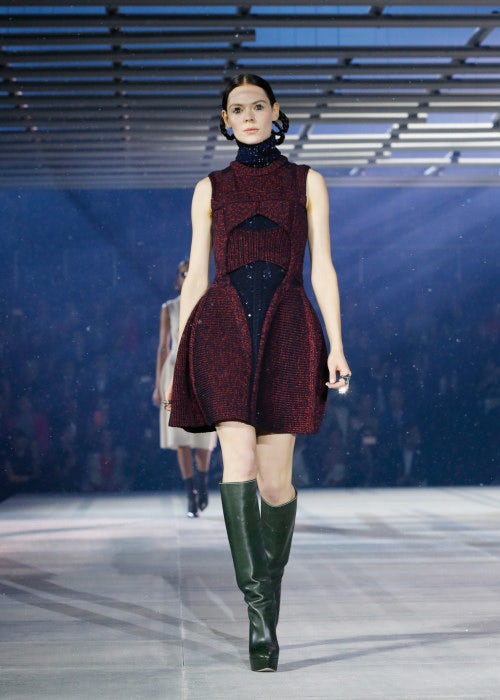 It was named the Esprit Dior Tokyo collection: a modern, beautiful Dior show that also felt Japanese. “In a ideal world I would have loved to have this show in the streets,” said Simons. “But it wouldn’t be possible here in Tokyo; there are too many regulations, even for Dior!”

This was Raf Simons’s sixth collection for Dior this year. According to the designer, “Creating more collections a year has now become part of the system. Just recently, I was wondering myself if it’s the fashion houses that push for more collections to create more buzz around them, or if it’s the customers’ demand. But then if there was no demand, there wouldn’t be any need to make new clothes. And although sometimes I feel there’s not enough time, once the collection starts taking shape, then I get excited and motivated again.”

Mr Toledano, driven by a more commercial sense, added, “Shops need to be filled with new clothes all the time, in order to satisfy the customers that are very spoiled with choice today. I believe in proper collections that have a sense and the Esprit is going to be a new way to develop Dior and there will be a show in a different city every year.”

Simons agreed, “Bringing the collection abroad has a very special feeling. You get inspired by the place you decide to go, and then you engage with the audience, who can concentrate more on the collection, without having to rush to the next show, as it happens during Paris Fashion Week.”

Esprit Dior is also the name of the exhibition celebrating the world of Dior haute couture, which runs in the elegant area of Ginza until January 4th, 2015. Here, beautiful old and new haute couture pieces are shown on mannequins and in gigantic photographs by Patrick Demarchelier. The exhibition is an education in Parisian couture, featuring some of the petites mains who work on fabrics and embroideries in the Dior ateliers of the Avenue Montaigne. On the top floor, Lady Dior bags have been reworked by artists including Wanda and Kengo Kito and are presented as works of art. And in the brand’s shop across the road, Lady Dior bags are still a must-have for every Japanese woman.