PARIS, France — These were strange days at Paris Fashion Week. As fears over coronavirus grew, spurred by a breakout in the Lombardy region of Italy that includes Milan, this season was like no other. BoF’s Editor-at-Large Tim Blanks said the general malaise felt similar to what it was like during the shows that took place in the winter of 1991, at the beginning of the first Gulf War.

PFW attendees, in good health or not, were constantly reminded of the growing pandemic, often by their seatmates, who took to applying hand sanitizer and, in some cases, were wearing facemasks. (One client at the Chanel show on Tuesday morning even decorated hers with a few of the brand’s signature camellias.)

The nine-day event started with concerns that some marquee names would cancel — either because of a French government mandate (which ultimately came but only applied to events of over 5,000 people) or reliance on Italian factories — but the shows largely went on as planned, beginning with Dior and Saint Laurent last Tuesday and ending with Chanel, Miu Miu and Louis Vuitton a week later. However, smaller brands — including APC, Agnes B. and Rosie Assoulin — did cancel their presentations, relying instead on digital platforms like Joor and Ordre, as well as more traditional PDF line sheets, to show buyers their collections.

But there were big ideas amid the chaos. Here’s what happened this week that will shape the industry for the next year:

Luxury executives on the ground in Paris said that the impact of the coronavirus on sales in Asia over the past month may mean that global growth this year will be flat— at best. Companies are watching numbers more closely than ever, especially as the pandemic spreads beyond Asia and Europe and into the United States, where there are cases in multiple states. (Thus far, North American sales of luxury have remained relatively stable for many brands that do not rely too heavily on Chinese tourism to fuel their US-located retail stores.)

In a recent note, Bernstein analyst Luca Solca wrote that the industry must not try to compare coronavirus to the 2003 SARS outbreak, when consumer spending quickly recovered. (It took hard jewellery around three months to recover, while apparel bounced back in about two.) But back then, Chinese consumers only accounted for 2-3 percent of global demand. Today, they are more than 10 times that: and maybe even more so for luxury brands, which rely on China for the majority of their growth. What’s more, SARS did not spread nearly as far as coronavirus.

Bernstein partnered with the Boston Consulting Group to survey 28 C-level luxury executives, adjusting its projections for the year to reflect the coronavirus effect. “Most of the luxury executives surveyed expect to reach pre-crisis revenue targets in just one year (by 2021),” Solca wrote on February 25. “We may have to cut more, if the epidemic continues beyond current signs of containment.”

The industry’s reliance on one country — China — for so much of its materials and manufacturing, not to mention sales growth, is dangerous. Over the past decade, China has accounted for 38 percent of the global fashion industry’s growth and 70 percent of the growth in the luxury segment, according BoF and McKinsey’s most recent State of Fashion report. 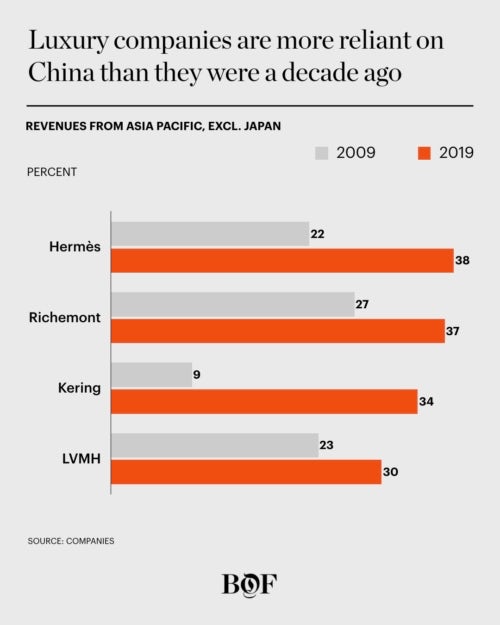 Fashion Moves Away From Sneakers, But Doesn’t Lose Its Practicality

While “merch” wasn’t gone from the runway entirely — see Balenciaga’s football kits for proof — designers decided that dressing down was no longer the only way. The emphasis, instead, was on feminine, traditionally flattering silhouettes and close-fitting tailoring from Altuzarra and Celine to Balenciaga and Alexander McQueen.

The humble sneaker — a wardrobe staple, but also a fashion staple for the past decade — virtually disappeared from the runways this season, save for Louis Vuitton, where womenswear designer Nicolas Ghesquière showed yet another inflated trainer.

But while the high-fashion mood has shifted to something more buttoned-up and ladylike, consumers will continue to rely on casual, comfortable footwear in their everyday lives. The global market for sports footwear is set to hit $178.8 billion in 2024, up from $90 billion in 2014, according to Euromonitor.

The biggest actual trend, however, was entirely practical. “There were so many all-black looks,” said Mytheresa fashion buying director Tiffany Hsu. All-black attire isn’t particularly great bait for Instagram, but it is good for commerce, given that it is the most commonly bought colour (or non-colour, if you want to get technical) of clothing for most apparel retailers. In fact, 25 percent of all apparel that has hit online stores in the US and UK luxury market in 2020 so far has been black, said Krista Corrigan, a retail analyst at tracking firm Edited. (The replenishment rate is also higher: 19 percent, compared to 17 percent across all other colours in the luxury market.)

Digital Wholesale Platforms Get a Boost

Coronavirus isn’t just affecting retail sales. It’s also disrupting the wholesale model. Along with virtually all Asian stores, buyers from US-based Saks Fifth Avenue and other American retailers either left the shows early or cancelled their Paris plans altogether to start their 14-day self-quarantine after being in Milan.

As a result, the industry got a taste of what an entirely virtual fashion week might look like, with digital buying tool Joor and virtual showroom Ordre both reporting a massive uptick in engagement.

Joor, a US-based company that has digitised the analog ordering experience for buyers, said that the average value of an order during Paris Fashion Week this season was four times higher than it was a year earlier, driven by a much larger number of items per order (three times as many when compared to last year).

Many buyers use Joor within showrooms already. (Seasonal orders are placed on iPads loaded up with Joor’s software.) Smaller retailers often place orders when they can’t afford to travel to showrooms or in-between seasons, but this is the first time it’s been the dominant use case.

“Learning how easy it is is a good thing for the industry,” said Joor Chief Executive Kristin Savilia. “I’m a big believer in the physical showroom, but there are times when you just cannot travel and this is certainly the next best thing as an experience.”

According to Ordre founder and Chief Executive Simon P. Lock, “interactions” — defined as every click in the showroom — are up 375 percent this season. Several major brands, including Gucci and Bottega Veneta, fast-tracked the launch of their virtual showrooms on the platform in order to serve absentees.

Lock called the shift an industry “tipping point,” spurred, unfortunately, by a global crisis. “Virtual showrooms are not going to replace the experience a buyer will [have] when they actually arrive in the physical Gucci showroom surrounded by the manifestations and culture of the brand and the ability to touch and feel,” he said. “However, as an additional channel to review collections and place orders when physical attendance is not always possible, virtual showrooms are now a must-have to future proof your business against a range of changing industry practises — as well as a world of increasing travel restrictions.”

Whether or not the forced restrictions will make retailers reconsider whether or not they need to see the clothes in person — and on the runway — for the long term remains to be seen. Fashion week may not be as transactional as it once was, but it remains a powerful networking event; having those face-to-face interactions offer intangible value. “We had to cancel a lot of our Milan appointments, which means we didn’t see the product in person and we had to order in pictures,” Tsu said. “It’s not ideal as you can’t touch the clothes, and we like to see it on the model.” 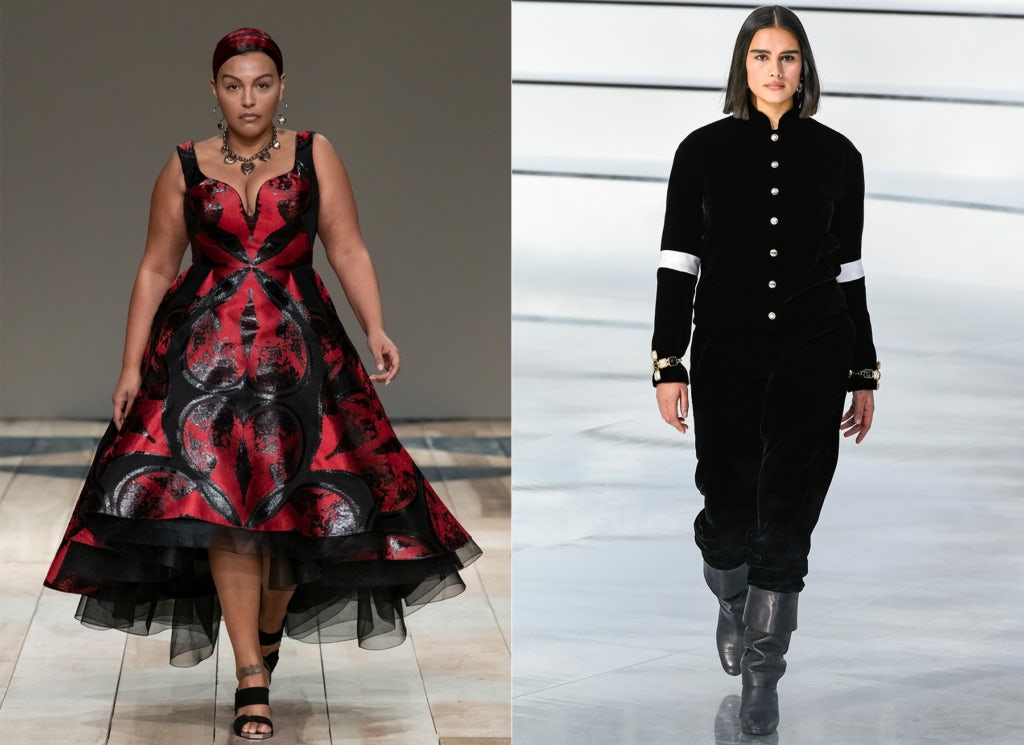 On the New York catwalk, diversity of all kinds — ethnic, age and size — stirs a seasonal dialogue. But in Paris, where traditional physical ideals still rule luxury marketing, body type has been less of a consideration. However, there was a notable, if not revelatory, shift this year, with American fashion model Paloma Elsesser’s presence on both the Italian and French runways, including Fendi, Lanvin and Alexander McQueen. At Chanel, designer Virginie Viard sent Jill Kortleve — who also walked at McQueen — down her smoke-and-mirrors runway in a velour tracksuit. Kortleve became the first plus-size model to walk Chanel’s runway in a decade. It was also the first time Lanvin had ever cast a plus-size model on the runway.

Kanye West’s Sunday Service and surprise fashion show on Monday night may have been the most widely covered instance of Paris Fashion Week getting spiritual. (Not only did fashion journalists document the events, but so did outlets like Fox News, which has been tracking West’s every move since he became a public Trump supporter.)

But while West’s presence made the most noise — with some public figures criticising the fashion industry for embracing the Trump supporter — he was not the only designer to meditate on the current global unrest. That same morning, Issey Miyake showed a collection grounded in community, binding together the models in a way that suggested “we’re all in this together.” And just an hour later, Balenciaga’s Demna Gvasalia painted an apocalyptic portrait through projections of fire and brimstone, with models walking on water in slick protective capes and armour-like suiting.

While some of these ideas are more polarising than others, they speak to a greater movement and desire to find meaning in uncertainty and distress.

“What you learn in tough times is that you have to believe in something bigger,” said Julie Gilhart, chief development officer at brand-platform Tomorrow. “For risk management purposes, we can’t drive business without thinking about the soulful aspect and how it affects human beings and the planet.”

We don’t know what comes next. Coronavirus has brought tragedy, but also uncertainty. In four months, when the men’s shows come around, we may not be travelling at all.

But it has also forced the fashion industry to contemplate its current mode of operation. While in-person contact is important for building strong relationships, there is a lot of transactional work that can be done virtually — without so much waste. As fashion weeks become more fragmented, designers, editors and buyers alike reconsider the necessity of attending a series of events that take up months out of a year. Whatever happens, this is an opportune moment to reevaluate why fashion week exists— and how it works.