With Milan Fashion Week in need of fresh blood, Giorgio Armani has invited emerging Italian designer Stella Jean to present her ethical Spring/Summer 2014 collection at the Teatro Armani, his Via Bergognone show space.

MILAN, Italy — In a business of first names — like Miuccia, Raf, Dries, Alber — things are about to get complicated. Meet fashion’s future star, Stella. That would be Stella Jean, who no less than Giorgio Armani has anointed a fashion supernova. Taylor Tomasi Hill, social media star and creative director of Moda Operandi, is another supporter. So is Natalie Kingham, head of fashion at Matches Fashion. 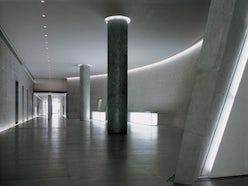 During Milan Fashion Week, Stella Jean — a resident of Rome — is set to show at the 550-seat Teatro Armani, the first womenswear designer so honoured, other than the emperor himself.

The show is scheduled to start at 10.30am start on Saturday, September 21st, which, while sandwiched nicely in the calendar between Emporio Armani on Friday and Giorgio Armani on Monday, pits it against a considerable challenger. Saturday morning during Milan Fashion Week is, you see, the sacred time for “shoe appointments,” a euphemism for shopping. Yet the buzz around “the new Stella” is such that the front-row set are confirming attendance in Via Bergognone rather than Via Monte Napoleone.

So why Stella Jean?

Firstly, she isn’t a baby designer. Rather, she is a woman of 34, mother of two and a former model (although she disliked all but the fittings and watching the designers at work). She launched her eponymous label in Rome in 2011, but far from being an overnight success, she twice failed to even qualify for the talent competition “Who Is On Next,” supported by Vogue Italia as part of the Alta Roma schedule. It was third-time luck when she finally qualified, then won.

Alta Roma’s elegant talent scout Simonetta Gianfelici helped to turn things around for Stella Jean, advising her to “be more sincere; do something that belongs only to you.” Stella Jean (her surname, though she doesn’t use it professionally, is Novarino) is half-Italian and half-Haitian. “I had struggled to find my identity,” she says. “I found it through my work. I put my two worlds together and found fashion was looking for that.”

She calls her unique vision "Wax & Stripes" — the latter for a father who hailed from industrial Turin and the former “for the black side of me, the black roots of the Caribbean islands.”

Certainly, the first thing that attracts the eye to Stella Jean's work is her vivid use of colour and riotous prints; these in contrast to somber stripes and silhouettes so proper, they’d suit Vivien Leigh in The Roman Spring of Mrs Stone.

Here the story veers off into the history of “wax,” vibrant cotton prints worn across West Africa. Their original roots lie in Java, however, in the batik the Dutch transported, first back home, then to the Netherland Antilles in the Caribbean and thence to Africa with Helmond, Holland-based textile giant Vlisco, the dominant wax trader from 1846 to this day. “We think wax comes from West Africa. The slaves sent to the Caribbean islands came from West Africa. Yet wax is European, like me. No one ever believes I am Italian, but I am,” says Stella Jean.

Having witnessed her sophisticated global mash-up in a group show in Rome, last July, Suzy Menkes became an ardent champion of Stella Jean. And rumour has it that it was she who whispered in Armani’s right ear as Vogue Italia’s Franca Sozzani was whispering the same name in his left. Whatever the facts, the designer herself had no clue.

“I was on the expressway when a friend called and told me to pull over. Then I was screaming, 'Is it for real?’”

Calmer now, she describes Armani’s offer as “a giant giving a hand to a new name. It’s not just for me. It is a symbolic act that gives hope to my generation."

Mr Armani says he did it because “the new generation of Italian designers needs support. Stella-Jean will be the next designer to organise a fashion show at the Teatro Armani and I hope this experience brings her luck.” No word yet on whether he will be there to wish her that personally.

Matches Fashion will certainly be in attendance, having signed up Stella-Jean after a look book arrived, unheralded, at their London offices. “I was initially attracted to the styling which was exceptionally strong, as was her use of colour and print,” recalls Natalie Kingham, the company's head of fashion. “When I looked at the collection up close the next time I was in Italy. Her clever mix of traditional fabrics in such modern shapes made me realise how interesting the label was. It felt relevant and really stood out. That it sells out the minute it hits the site is a sign that she has potential to be big.”

Taylor Tomasi Hill, Moda Operandi’s creative director, praises her Stella Jean's “distinctive aesthetic — no small feat for an emerging designer. Her bold patterns tempered by ladylike silhouettes capture precisely how our customer wants to dress: unconventionally, but not at the expense of luxury or intelligent design.”

For myself, a fashion scribe of over 25 years, Stella’s first solo show, in Rome last January, stands among those rare debuts that feel right on target: John Galliano, Romeo Gigli, Phoebe Philo for Céline.... Yet bear with me here while I change hats, because (full disclosure) I also work as a consultant for the International Trade Centre's (ITC) Ethical Fashion Initiative, a United Nations initiative aimed at changing the way the international fashion business works. The aforementioned Simonetta Gianfelici is a consultant too. And it was she who first recognised Stella Jean as the right creative collaborator for a collective of marginalised artisans far across the world. 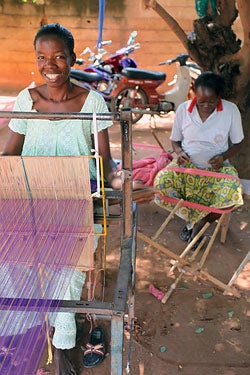 Although the Ethical Fashion Initiative is active in Stella Jean’s mother country, Haiti, when she and Gianfelici found themselves wilting in 47-degree heat last April, it was not in Port-au-Prince, but Ouagadougou, in landlocked Burkina Faso, West Africa.

“Burkina Faso is rich in cotton and incredible weaving traditions. The poorest of the poor are the heirs to ancient artisanal traditions that can only be rejuvenated at the luxury level because handwoven fabrics are extremely labour-intensive,” explains Simone Cipriani, who helms the Ethical Fashion Initiative.

“Stella’s capacity to use materials from all over the world, along with her passion for involving people in a fair way in her supply chain — she is extremely serious about that — persuaded us to ask her to join with us.”

Cipriani’s delight when the news of Mr Armani’s support came through was at least as loud as Stella Jean's. “It is something incredible!" he says now, still rather loudly."That this work will be seen in the theatre of Armani!”

He will not be front row to witness it, however. He'll be in Ouaga, where he will share the glory with the weavers of the collection, for whom a video of the event is being made.

Everyone agrees ethics can't carry fashion. First, the design must be great. What ethics provide is “another positive dimension,” says Kingham.

“[Ethics] resonates, not only with our core values, but also our clientele," says Tomasi Hill. "We’re passionate about representing ethically-minded designers who collaborate with artisans around the world."

As for Stella Jean, “the world doesn’t need someone else to [just make] beautiful clothes," she says. "We don’t need more empty aesthetic expressions. We have to grab a chance to do more, to tell more."

"I come from two worlds and I believe the more we meld together, the stronger we can be.”

Marion Hume is a fashion journalist and a senior consultant for the United Nations' ITC Ethical Fashion Initiative.