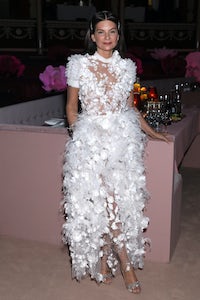 LONDON, United Kingdom — By the time she left Net-a-Porter, the company she founded in 1999, it was worth three billion dollars. She has just resigned after five years as chairman of the British Fashion Council. She is currently non-exec co-chair of Net rival Farfetch. In April, she will launch Imaginary Ventures, an investment fund which is currently cloaked in secrecy. Oh, and since January 2016, she’s been a Dame, a real one. Dame Commander of the Order of the British Empire. So what does Natalie Massenet tell her daughters? “If I can do it, anyone can.”

She never stops insisting on how average she is. “I’m an example of an ordinary person who said, ‘I want to do this, and therefore I’m doing it.’ Anyone can put their mind to it. There are so many great ideas, so many businesses and brands yet to be created by people who sit down and do it. That’s very exciting, and I hope that’s the spirit I live by as long as I can.” You can see how Massenet’s insistence on her own ordinariness has played a part in her ability to winkle out things in other people that they maybe haven’t yet seen in themselves. That’s what helped make her such a personable but potent force at the BFC, which is the real reason we’re having this “exit interview.”

“I can see opportunity and I’m very quick to shine a light on where it is and to give encouragement where that’s needed and support over time to help people achieve their goals,” Massenet acknowledges. “That’s something I like to do.”

And that seems to involve professional relationships that veer into close friendships. “I’m an all-in kind of person,” she agrees. “When I took on the role at the BFC, an important part of it was spending a lot of time with each of the designers, building personal relationships with them, getting to know their challenges. I don’t think there was one conversation I had with a designer — Thomas Tait just starting out, Erdem going about it in an independent way, Christopher [Kane] or JW [Anderson] who were getting support from Kering and LVMH — where I didn’t talk about them taking their brand and destiny in their own hands and focusing on retail, e-commerce and new forms of marketing. I think it was important that they heard this all the time. They were already of that mind-set because the world is changing. I spend a lot of time encouraging people to rethink the rules, and that’s very important if you want to build a business in today’s marketplace.”

And what rules did she have to re-think? “First thing, we focused on the governance of the BFC, bringing in some non-execs who could add value. I immediately set out to define the five areas of focus that needed to be divided and conquered, and I appointed presidents to each of these five pillars: reputation, business, investment, digital and education, equally important and each needing to be addressed. We had Google, investment banks, The London School of Economics, the mayor’s office, not just the fashion industry, get behind these initiatives, so we managed to get more done.”

“A catalyst? Yes, I think I am, in many ways. When you’re chairman of an organisation, you’re not doing the heavy lifting. That was Caroline Rush and the executive team who are one of the most accomplished teams I’ve worked with. I wouldn’t have been able to get anything done without Caroline. But what I did as a catalyst was refocus key energies on the five pillars and the five-year vision.”

British talent and creativity are what drives the industry worldwide, and that’s never been truer than now.

There must have been some pushback. “Funny, things stuck to tradition,” she acknowledges with a laugh. “They were ingrained, like showing on Monday. So trying to move people off of Monday, trying to get people to show at 2pm so they could livestream at 9am in NYC and 8pm in Hong Kong — that was very clever. But the big picture things — like needing to focus on digital, rethinking growth strategy, moving away from wholesale to retail, or the potential crisis in education funding — all of these things people jumped on board. That’s why the British Fashion Awards were so important. It was the first chance for the BFC to have a recurring revenue stream that would allow us to generate funds for the industry in a sustainable way, rather than being overly reliant on advertising and sponsorship. It’s the same thing we tell the designers.”

Like fashion award ceremonies everywhere, the BFA has been dogged by what looks like a finite pool of nominees. “I don’t know if that’s a challenge for the BFC,” Massenet counters. “It should be a call to action for people to continue to innovate and be creative. Look at Alessandro Michele coming out of nowhere and winning awards a year later.”

The Fashion Awards were the most graphic manifestation of what Massenet describes as her “main goal overall”: to recontextualise British fashion and to add the concept of business, not just fashion. “British talent and creativity are what drives the industry worldwide, and that’s never been truer than now. I felt it was important that we owned that spirit and we're proud of it, and bolster it with the mind-set that it is a business, that we had to address technology and digital, that we had to look at changing trends but also to make sure any creative business started in the UK fashion industry was being built for success, could stand independently and thrive, so we would have a sustainable industry.”

“There was a sense, years back, that London was non-essential to attend,” she adds. “You never knew what you were going to get, it was pushing the envelope, it was unpredictable, all the things that, if you reframe them, are the creative assets you need to survive. We now have a generation of designers in London with their name on the door. They’re retailers, brands they’ve launched e-commerce, they’re profitable.” Despite the fact her brainchild inspired a wave of disruption in fashion retail, she remains an ardent supporter of bricks and mortar. “I’m very pleased that brands like Christopher Kane and Erdem opened their own stores in the last five years because those expressions of themselves as a direct-to-consumer business are extraordinarily important today.”

It’s in Massenet’s nature to be as positive as possible. Some of those designers with their names above the door may not be doing as well as they were. There is the gnawing political uncertainty in the UK. The struggle is never-ending. Her mantra is simple: with change comes opportunity. “When I joined the BFC five years ago, it was a very different time and place. Now we’re looking at an industry rethinking fashion show schedules, what it means to have a fashion show, how business works, who the players are, it’s a very exciting time if you embrace change.”

To single out one of those challenges: what does it mean to have a fashion show? “The reality is more people are seeing fashion shows than ever before. They’re just not in the room. But what do you do with that extraordinary opportunity? You use the show to market your collection. And you don’t show it to a consumer unless you can start selling them the product.”

This sounds a lot like the non-starter see-now-buy-now notion to me. Massenet demurs. “I think everyone gets in a real muddle up with that. If you’re going to show consumers something exciting — and you can say the same thing about a new series on Netflix or a new phone from Apple — I would like to have it now. Don’t make me wait.”

What about the argument that anticipation stimulates desire? Some designers insist their customers are happy to wait. “I think that is a rationalisation from someone who doesn’t want to change and doesn’t want to go through the supply chain headache. That is the same kind of statement as ‘Customers like to see different prices all over the world’. They’re all just rationalisations from an industry that grew before globalisation and digital. The most urgent thing for high-end fashion designers — if you’re going to release the designs of your latest collection, you’re setting yourself up for failure by allowing the high street to develop and distribute your concept before you can.”

There’ll always be a success like Gucci to give the lie to a blanket statement like that. And Massenet knows it. “I totally agree that there is not one right answer for everybody. People should do what is right for them, right for their aptitude and right for their customer. If you can only deliver two collections a year, then only do two collections a year. If you are focused on accessories, then only do accessories. If you are a great eveningwear designer, then only do eveningwear. Do not try and do what the other person is doing. Just do what you do very well. And if your supply chain means you have to work in one way, then work in that way. The system has to make room for all of this. We’re going to develop this our own way. It’s very British to be innovative and re-think things.”

And that, presumably, is what the BFC is doing in its talent quest for Massenet’s replacement as chairman. She imagines “a candidate who won’t replicate what I did, just as I didn’t replicate what came before me. I’d tell them to take the baton and run, not necessarily in the same direction, just keep running. But I hope the next chairman of the BFC is thinking about the impact of Alexa, of artificial intelligence, of last mile delivery. There are so many exciting things that are going to drive the future of the fashion industry.”

And, tech aside, there are the ethical issues which will bring change as the fashion industry responds to #MeToo, #TimesUp and its own activist movements. “It’s time the fashion industry professionalised,” Massenet says crisply. “Business will be done in a much more professional way. The next generation is going to do everything differently. And that kind of sums it all up.”

Still, she holds out for tradition in at least one respect, in a way that is likely to impact however her career evolves going forward. “In the end, people want to express their individuality and celebrate moments in a particular way. They want beautiful things, beautiful clothes. There’s an industry for that. It’s called the fashion industry and that will never change. But the way we’ve worked in the past will change — and that’s ok.”