LONDON, United Kingdom — In fashion, the line between creation and curation is becoming increasingly blurred. Nowhere is this more prominent than in the rise of “re-editions” — near-carbon copies of archive pieces from a brand’s heyday, re-issued for an audience that may not have been alive when the originals first appeared on the runway. In some ways, it’s the sartorial equivalent of a #TBT for a nostalgia-soaked post-internet generation.

Re-issues popped up at a number of prominent brands this season. In New York, designer-in-residence Shayne Oliver presented his take on Helmut Lang. But alongside Oliver’s runway outing, editor-in-chief Isabella Burley introduced capsule collections of archive facsimiles, activating and solidifying Helmut Lang’s heritage, while tapping into the demand for vintage garments from the eponymous founder’s tenure. She made headlines with her designer-in-residence concept (the first of which was Oliver) but the counterbalance to that hyper-ephemeral business structure is Helmut Lang’s ‘Re-Editions’, a seasonal re-issuing of 15 archive pieces, such as the silver Astro-parkas, painted jeans and bullet proof vests — all precise reproductions of the originals.

In Milan, Donatella Versace paid homage to her late brother Gianni at their namesake brand’s show, sending down the catwalk lightly refashioned replicas of some of his most iconic designs from the early '90s, worn by uber-supermodels Naomi Campbell and Cindy Crawford — whose careers were bolstered by lip-synching George Michael’s “Freedom! '90” on the Versace catwalk in 1991 — on one of the season’s most Instagramed moments. “Times have changed,” wrote Tim Blanks in his review of the Versace show, which was followed by news that the brand was reissuing a limited-edition collection of archival print T-shirts, arguably the humblest of garments. “The clothes now moved differently from the clothes then … How will these apogees of early-90s style look to an audience 25 years later? Fan-bloody-tastic.” 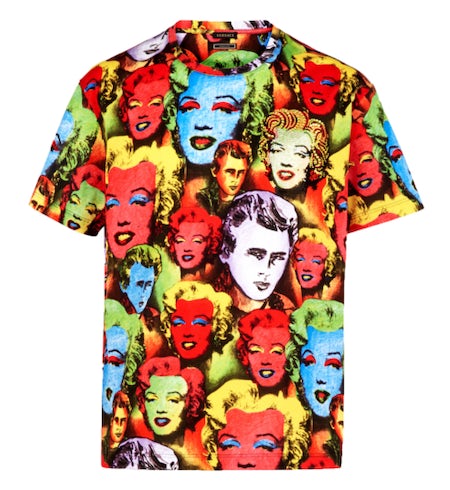 The following week, in Paris, Kenzo’s creative directors Humberto Leon and Carol Lim showed ‘La Collection Memento,’ an archival ode to Kenzo Takada, the brand’s founder who helped ignite a ready-to-wear revolution in early '70s Paris. Leon and Lim plan to present the collection each season as part of the March and October womenswear schedule. (The brand shows its main ready-to-wear collection in January and June, in line with the menswear schedule).

Of course, designers have always plunged into archives in search of inspiration, tweaking elements of a garment in an effort to create something modern. But the rise of entire collections of re-issues is a relatively new concept that comes with strategic benefits.

For one, re-editions are a powerful way of storytelling and can act help a new generation understand the potent essence of the brand in its original incarnation. Secondly, they can also offer direct commercial benefits, drawing on the power of ‘greatest hits’ as a way to create seasonless, replenishable product that is sure to sell. And thirdly, it can liberate creative directors from the shackles of paying homage to old ideas, and assert the ownership of a particular design amid accusations of design plagiarism and appropriation. Together, this combination can serve to deliver a powerful blend of brand storytelling and newness in a world where authenticity increasingly matters, despite that consumers increasingly expect newness at the speed of Instagram.

“Not a lot of people know much about the history of the past, but they do know about images,” says Dr Valerie Steele, museum director at the Fashion Institute of Technology, who considers the modern consumer to be “visually literate.” “They have a kind of mental rolodex of images from the past… It's divorced from nostalgia about the context, it becomes an image memory.”

Re-editions are a powerful way of storytelling and can act help a new generation understand the potent essence of the brand.

Rumour has it that when Helmut Lang left his namesake label in 2005, he donated some key archival pieces to a handful of institutions and put the rest of the 6,000 items through an industrial shredder; others say that the pieces were mostly destroyed in a fire below his studio. Either way, the refuse was turned into 16 sculptures as part of Lang’s entrance into the art world. According to Burley, however, there was an archive in New Jersey where many original pieces have been re-acquired, which she relocated to the studio in New York.

“There’s a dialogue between taking ownership of these pieces and being an authority on Helmut Lang, and also making sure there’s a newness and using the heritage to serve as a platform and discussion point for a new generation of creatives,” says Burley. It’s a shift from the traditional narrative of a designer arriving at a house and pillaging and re-inventing archive pieces. “It’s not about designers doing their own take on the Helmut bomber,” Burley concurs. “It’s less directly reinterpreting pieces and more about carrying a spirit and energy.” Re-edition pieces will be released every four or six months, and released just before the biannual fashion shows. 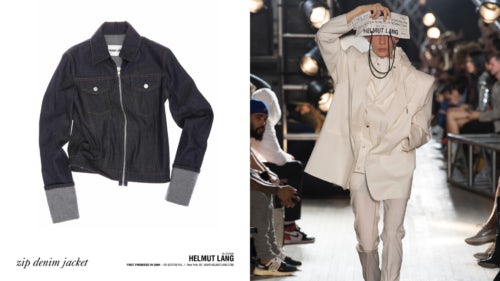 “It makes sense to say, ‘Right, if you're going to copy my old stuff, why don't I copy my old stuff?’ and then attract the audience that likes those things anyway. That way, you're getting the benefit from having had the original idea. I think it's a clever way to subvert the culture of replicating ideas from the past,” says Steele. “So many pieces that we take for granted now and have been reinterpreted by other designers were first done by Helmut and I think it’s important to celebrate that,” agrees Burley.

Whereas once the heritage brands were grand maisons steeped in early 20th century history, today there are brands that are 30 or 40 years old and whose archive is more timeless and modern-looking than pure period pieces. Jeans and sportswear, for example, can be plucked from the '60s or '70s and look just as relevant and desirable today. At Kenzo, which was founded in 1969 and rose in tandem with ready-to-wear houses such as Chloé and Yves Saint Laurent, Leon and Lim set out to re-contextualise the house and its history. “With all the information and noise in fashion, you forget that some of these brands are historical,” says Leon. “As a creative director, I don’t just want to put my stamp on it; I want to build a legacy where the time we’ve spent here, we’ve done it justice.”

“For me, it’s less on a nostalgic level and more trying to inform a younger generation,” he stresses. “Today’s kids or Gen Z don’t know who Britney Spears or Christina Aguilera are! We need to let people know the history of the brand and that it’s not just a brand that Carol and I just started six years ago.” With the exception of a few design and material tweaks, almost all of the Memento collection comes from the extensive archive. “We’re not afraid of going into the archive and dedicating and using Kenzo as a platform for someone else’s work,” adds Leon, referring to Kenzo Takada. “It allows us to tell a story that gives relevance to the house.”

[We're] using the heritage to serve as a platform and discussion point for a new generation of creatives.

The strategy can have commercial benefits as well, reassuring consumers that there is a classic product as well as seasonal styles. “It used to be more typical in accessories or small leather goods, but now, more ready-to-wear brands are trying to create key pieces that they can propose every season,” Mario Ortelli, a senior luxury goods analyst at Sanford C. Bernstein, told BoF last year. “From a business perspective, the more you have of a style, the better your economies of scale and the more experience you have of producing and selling it, so it maximises your working capital. It also increases your profitability by limiting markdowns because you can keep items on sale for longer and they’re not specific to the seasons, so you can work with your manufacturers to re-order throughout the year.”

It chimes with the feeling from today’s youth that trends are outdated and dictatorial. “Generation Z don’t like having trends dictated to them and consumers are generally a lot more responsive to the idea of mixing and matching,” says trend forecaster Victoria Buchanan. Last year, The Future Laboratory conducted a quantitative study that showed that 65 percent of luxury consumers would be interested in adopting ‘seasonless style’, which can be identified by lines of core year-round product, seasonless imagery and an emphasis on long-term vision over short-term hype. “Consumers will increasingly want brands to act not on the basis of short-term demand, but on long-term vision, with sustainability at the core of manufacturing,” she adds.

Perhaps the most successful re-editioning has been at Adidas Originals, where the Stan Smith, Superstar and Gazelle sneakers have skyrocketed since their re-launch. The Stan Smith was first seen in 1971 and named after the American tennis played and later unveiled in late 2015. “Adidas hoped to sell 30,000 pairs in the first year, and ended up selling over a million,” Leila Fataar, Adidas’ former global director of social media and public relations, said at BoF’s ‘Inside the Industry’ event in September. Sales of the shoe jumped dramatically, to 8 million pairs, in 2015, bringing total sales over the past four decades to more than 50 million.

“The best iPhone is the basic one; I think it’s the best one because it was perfect when it was first made,” Nic Galway, vice president of global design at Adidas Originals, told BoF in June. “It was a great piece of design and therefore you don’t need these limited-edition ones.” Galway’s ethos is central to Adidas Originals, which was created more than a decade ago. The re-editioning sits alongside buzzworthy collaborations with figures such as Kanye West and Pharrell, and together, the two elements represent a synergy between the past and present.

Adidas says sales of its Originals collection, which includes the Stan Smith and another top-selling throwback model called the Superstar, popularised by Run-DMC in the '80s, increased by 80 percent in the US last year, which sold more than three times faster than the traditionally blockbuster footwear for team sports, such as basketball and football.

Perhaps one of the most obvious reasons for the success of re-editioning is that a younger generation will not be familiar with the originals. Just as a 20-year-old may not remember Helmut Lang or Kenzo Takada, the Stan Smith has a whole new meaning to them. “There’s a whole generation today whose memories will be around the 2000s,” said Galway. “If you speak to Stan, he will say: ‘I used to be Stan Smith the tennis player and now I’m a shoe.’”

Why Younger Designers Are Building Archives