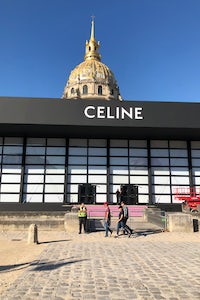 PARIS, France — Fashion has its fair share of mega stars. However, there are few as polarising — or as powerful — as Hedi Slimane. The designer made his first major mark on fashion in the early-2000s at LVMH-owned Dior Homme, where he popularised the skinny, wasted-youth silhouette that changed the course of menswear.

During his four-year tenure at Saint Laurent, where he famously dropped “Yves” from the name of the house’s ready-to-wear line, his runway shows were sharply executed, if not critically acclaimed. His methodical approach to product, including a collection of perennial core items, drove a near tripling in revenue. In 2016, when Slimane exited the Kering-owned brand after months of speculation about his future, sales hit €1.2 billion, up more than 150 percent from €473 million in 2012, the year he joined.

Now, after a two-year hiatus from fashion, Slimane is embarking on his most ambitious project yet: the rebooting of Celine, once a conservative, bourgeois label, which in the hands of designer Phoebe Philo grew from a stagnant business into the sophisticated star of LVMH’s portfolio of smaller fashion brands, generating just under €1 billion in annual sales when Philo exited late last year.

Slimane has now been reunited with his former Dior boss, Sidney Toledano, chairman of LVMH’s fashion division, and accepted the mission of transforming Celine into a megabrand to rival Louis Vuitton and Christian Dior. “Toledano has never forgotten what Hedi Slimane did for Dior Homme,” says John Guy, an analyst at MainFirst. Ditto LVMH chairman and chief executive Bernard Arnault, who is said to have been aiming to recruit Slimane back to the group for several years.

“The objective with [Hedi] is to reach at least €2 billion to €3 billion, and perhaps more, within five years,” Arnault told investors back in January. “Everything is in place for this brand to achieve quite exceptional growth.” Arnault’s long-term expectations for Celine may well stretch beyond €5 billion, rivalling the likes of Hermès and Gucci in terms of revenue.

How can Slimane make this happen?

Saint Laurent worked, said Guy, “because of strong creative and a strong ecosystem of product, and that has to be replicated at Celine.” At the French house, Slimane plans to add fragrance, men’s and couture — lines that could help to swiftly double the house’s revenue. Fragrance could very well become a €1 billion business on its own. And Slimane’s hardcore following of men are almost guaranteed to buy into his essentials.

The general consensus on the front rows in Paris this week is that Slimane will wipe the slate clean and oversee every element of the brand’s business from scratch, something he is said to have long craved but never had in the past. (At Dior, he was only responsible for menswear. At Saint Laurent, the beauty division was managed through a license with L’Oréal.)

Over the past several weeks, Slimane has dropped tips about his creative strategy. First, he removed the accent from Celine, something Philo had added back in when she took over in 2008. Then, there was a flood of imagery, including more than 30 Instagram posts and advertisements plastered onto scaffolding and uploaded onto digital outdoor displays in several major cities. A visual inspiration book was sent with the invite to his Spring/Summer 2019 debut.

Friday night’s big runway reveal at Les Invalides, the Paris site of Napoleon’s tomb, will be the real test. In what is expected to be an outsized runway — with a large number of looks, which have been keeping Paris’ top sample makers busy enough to turn away other designers — Slimane will lay out his vision for Celine.

A visit to Les Invalides on Thursday, the day before the show, revealed a venue that looked like a super-sized retail location. Slimane has constructed a matte-black box, framed by windows, to house his runway. One worker stood at the entrance, adding layer-upon-layer of paint onto the frame of the door, as he stood underneath the white letters spelling out, "C-E-L-I-N-E," all caps, no accent.

What Slimane will show inside remains under close wraps, although it seems the obvious essentials will all be represented: the perfect trench, the perfect jean, the perfect black dress. And while Slimane’s waifish model muses may feel familiar, his Celine is set to be more of a meditation on the bourgeois 1970s Parisian lady for which the brand first became well known (according to sources and indications by Slimane himself in Le Figaro).

Still, even a magic-maker like Slimane is sure to face some friction. His first bags for Celine — a shiny calf leather contraption called the “16” which has recently popped up on the arms of both pop star Lady Gaga and actress Angelina Jolie, and a square-quilted, cross-body flap with a chain-link strap — have attracted a mix of praise and vitriol on social media.

According to a report in Jing Daily, the hashtag #Celine设计师令人窒息# — which translates roughly to “Celine designer[’s design] is stifling” — has been trending on the popular Chinese social media platform Weibo, with more than three million views and 1,000 comments.

As for the long-term ambition, “it’s probably achievable,” said Guy, especially as Celine — with only about 140 stores — could stand to boost its retail network. However, Guy cautioned that establishing new categories takes much longer than building on old ones. Whatever the outcome, Slimane seems set to also remain the industry’s headline act for some time.