LONDON, United Kingdom -- At the Friday opening of London Fashion Week, a group of five men and women dressed in white, with startling blood-red smears across their chests, glued themselves to the main entrance of the bi-annual fashion event.

“The fashion industry is killing our planet,” declared environmental activist Sara Arnold, standing over a pool of fake blood, poured across the pavement in front of the main event space on London's Strand by members of the protest movement Extinction Rebellion, who prostrated themselves in the bloody mess as Arnold spoke.

By 9.30 am everything was gone, the red paint reduced to a watered-down smear on the pavement where it had been hosed away. It didn’t matter. Googling London Fashion Week the next day, nearly half of the top stories turned up by the search engine focused on the activist group’s short-lived, but photogenic protest, rather than the latest designs. Sky News ran the headline, "Extinction Rebellion Protest against 'Fast Fashion' at London Fashion Week," while The Guardian posted a video titled "Extinction Rebellion Protesters Stage 'Die-In' Outside London Fashion Week Venue."

The fashion industry is killing our planet.

Behind the scenes, too, as insiders hop from show to show in London, sustainability has become a much bigger topic of conversation, with some calling the industry’s adoption of the fast fashion cycle by brands across the pricing spectrum a social “epidemic.”

In recent years, fashion has come under increasing scrutiny for its poor environmental performance from consumers and government regulators alike. High-profile campaigns like Extinction Rebellion’s are certainly helping to build consumer awareness about the negative impact of fashion, which spews out huge volumes of damaging pollution and toxic chemicals from its manufacturing processes.

Meanwhile, brands have lined up to burnish their sustainability credentials with a series of glossy initiatives. Last month, in a major move, more than 30 large fashion companies signed on to a new climate commitment, swiftly cobbled together by Kering Chief Executive François-Henri Pinault at the behest of French President Emmanuel Macron. 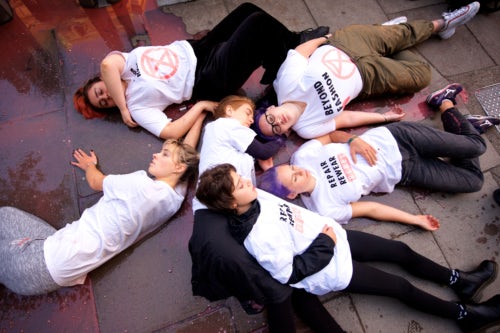 But in the UK, at least, the industry appears to be outmanoeuvred — and most certainly out-marketed — by groups like the Extinction Rebellion. Alongside headline-grabbing calls to cancel Fashion Week and boycott new clothes purchases, the group has led a social-media savvy and eye-catching campaign. Its deployed the now-easily-recognisable XR hourglass symbol, designed by street artist ESP in 2011, in eye-popping pink and green posters printed with bold and simple messages.

“It’s felt like a branded campaign,” said Rebecca Robins, global chief learning and culture officer at Interbrand. “They have been very clear and consistent in their go-to-market approach.”

Extinction Rebellion is a collective that organises in small groups to function as a decentralised movement. Many focused on driving change within the fashion sector are passionate industry insiders who see an opportunity in co-opting UK fashion’s biggest event of the year to promote the group's message.

“This is one of the most influential industries in the world,” Arnold, the XR activist and founder of fashion rental site Higher Studio, said in an interview with BoF. “If influential people can really get their heads around how much of an emergency this is and start communicating that in a way that’s proportionate to the emergency situation, it could be a real game changer.”

Fashion weeks are coming under fire for their high-visibility excesses.

Extinction Rebellion’s BoycottFashion Instagram account -- which calls on consumers not to buy any new clothes for a year — has gained about 15,000 followers since its first post in June. In addition to its stunt on Friday, the group is planning a series of events throughout Fashion Week, culminating in a “funeral march” on Tuesday.

Though they represent a small fraction of the industry’s overall impact, fashion weeks are coming under fire for their high-visibility excesses. Insiders have largely defended the importance of the events, which they argue provide an important platform for young, up-and-coming designers and celebrate creativity and craft, rather than excess and consumption. But there are signs that change is afoot.

Up-and-coming fashion hub Copenhagen has led the way. Among other things, it has banned single-use plastic bottles at fashion week events and started to offset the emissions generated by the parts of the event it organises directly. Later this year, it will lay out a three-year plan introducing minimum sustainability standards for brands that want to show in Denmark.

The organisations that run fashion week in London, Milan, Paris and New York have all said sustainability is high on their agenda, but none have taken such significant steps.

Last week, the BFC announced it plans to launch an Institute of Positive Fashion to “kick-start a much-needed, comprehensive step-change.” It has previously acknowledged that the world is facing a climate emergency and there is an “immediate need for the industry to act in a way that can make a difference and accelerate change.”

But the BFC was notably absent from a meeting organised last week by lobbying group Fashion Roundtable to discuss Extinction Rebellion’s call to cancel Fashion Week and the potential for reform. Chief executive Caroline Rush said she was travelling and unable to attend.

In a sometimes-heated debate about the role and importance of Fashion Week, members of Extinction Rebellion, political operatives and industry players including a large contingent from Burberry Group PLC, hashed out potential pathways to reform in an oak-panelled room off London's Oxford Street.

The BFC, meanwhile, said it would be reaching out to companies in the fourth quarter to mobilise its newly announced Institute of Positive Fashion. It intends to set measurable, industry-level targets and lay out a three-year road map to change.

People are starting to wake up to the emergency.

The body did dedicate a large portion of exhibition space this September to its Positive Fashion initiative, which provides a platform to celebrate industry best practice and encourage positive change. But it also gave prominence to sponsors like Evian, branding a fridge full of plastic water bottles with its Positive Fashion label. Evian has committed to make all of its bottles from recycled plastic by 2025, and the fridge was placed next to a recycling bin. It was opposite a stack of London Fashion Week-branded Nivea anti-perspirant samples. During London’s Fall/Winter shows in February, the BFC said it distributed 9,000 cans.

“I think one of the reasons we’ve captured the imagination is that people are starting to wake up to the emergency,” said ethical fashion writer and Extinction Rebellion member Bel Jacobs. “It’s not simply because it’s quite a shocking ask [to cancel fashion week], but because there is a sense that it’s needed.”