LONDON, United Kingdom — Sunnei cropped up whenever I asked people in Milan for a new name to watch. I thought it sounded like an Icelandic rock band. When I finally met Simone Rizzo and Loris Messina, I told them that and they laughed. Sunnei had been a mystery for long enough in Milan that there were still people who didn’t know who was behind it. The pair cherished that outsider status. “We started the company because we wanted to do something together,” said Messina. “We didn’t do it to be in the fashion system.” But lately they've been feeling a little pressure. There are expectations, the kind that come when you’re a young brand placed in the tricky position of being standard bearers for the future. In Milan, there aren’t too many others in competition for that role.

On Wednesday afternoon, Rizzo and Messina unveiled their new launchpad, SUNNEI Canvas. It was Part I of their Spring/Summer 2021 collection. An all-digital proposition, as the moment demands. Part II comes in September. Maybe it’ll be a physical thing. “We love the idea of creating a cathartic moment,” said Rizzo. “Will it be a fashion show? A party? An exhibition? We think that, rather than bring people to Milan, it might be better to do different events for our strongest communities, Paris, New York, Seoul, Tokyo. Create a moment not just for press and buyers but for our customers.” On Wednesday, September seemed impossibly far off as the Covid buzzards began to circle again. We were here to talk, screen to screen, about Canvas and why it offered creative solutions to problems the industry had been facing long before the 2020 lockdown.

As encountered in the on-line lookbook, Canvas is built on 20 all-white looks, 50 pieces, made from, yep, canvas. Granted a password, fashion buyers are able to access a platform where they can customize the looks to their own spec: adjusting shape and fit, with a choice of five different fabrics, including denim, poplin and nylon (and within those choices, six types of denim, say, or three types of printed nylon), six types of stripes, even more possibilities in colour (seven or eight shades of poplin, for instance).

Rizzo said it reminded him of his youth in Calabria, when he’d get his shirts from a small boutique, have them initialled and choose the buttons. “It was a simple idea crossed with our virtual aesthetic.” And it occurred to him and Messina while they were sitting in the peace and quiet of the small garden out back of their new studio, just the two of them, with the rest of their staff locked down at home under Italy’s stringent quarantine conditions. “We hadn’t been alone for the last three years, and now we could think.”

One of the things they thought about was how best to reinforce the relationship with their retail partners. “We felt buyers tended to be confused when they came to the showroom,” said Messina. “They didn’t know what to buy. We really wanted to make them feel part of the collection. So what about giving them a blank canvas, where they could finally play the designer game? ‘I want this colour, and stripes, or maybe checks…’ And that would be the selection for their store, with a customized tag. Made For Browns, Made for SSense. And we would work with fabric suppliers too, so they could be part of the project.”

That was how Canvas was born. The building blocks were Sunnei’s signature pieces. The long coat is probably the most distinctive. The rest, when cut from white canvas, have a linear, sporty, almost futuristic feel, clothes for digital nomads. Messina worked with 3D engineering technologists Pezzo di Studio to create a new world for the looks. It was a complicated process that would normally take many months. They did it in three. Five diverse avatars were created. In the short film launched on Wednesday, they danced the macarena as their clothes and accessories switched from white to colourful to checked to something else your buyer’s heart might fancy.

The effect was slightly surreal – the avatars are deliberately not as polished as modern technology could make them, genders are slightly blurred, and everyone is dancing the macarena, for heaven’s sake – but it efficiently communicated the possibilities of Canvas. And, more than anything, that efficiency is the most persuasive element of Sunnei’s Part I. There is a sample set of the white canvas pieces, which buyers can see. Otherwise, everything exists on the platform. “It was complicated to make suppliers understand that we didn’t need hundreds of pieces, sample collections, thousands of metres of fabric,” said Messina.

They claimed they’d both had a sensation of something about to go wrong long before it did. They were ready. “We changed our entire structure,” said Rizzo. Future-proofing? “We love gaming, we love digital destruction. As digital experts, we know the next decade won’t be about social media, it will be about gaming. Covid has simply sped the process up. In Seoul, there are already Animal Crossing avatars wearing Sunnei.” The duo claimed they’d been studying Messina’s 11-year-old brother for further insights into this new world. Which was just the sort of info guaranteed to make someone of my vintage feel l might as well be speaking a different language.

On the other — more reassuring — hand, Rizzo and Messina insisted what they’d love most would be to fuse the real and the virtual. “We’re very nostalgic, very into the 90s way of thinking and touching things,” said Rizzo. “We also know that fashion needs tools for people to better touch fabric.”

“You can’t do everything virtually,” Messina conceded.

The images in this review, courtesy of Sunnei, are not the full Sunnei Spring/Summer 2021 collection. 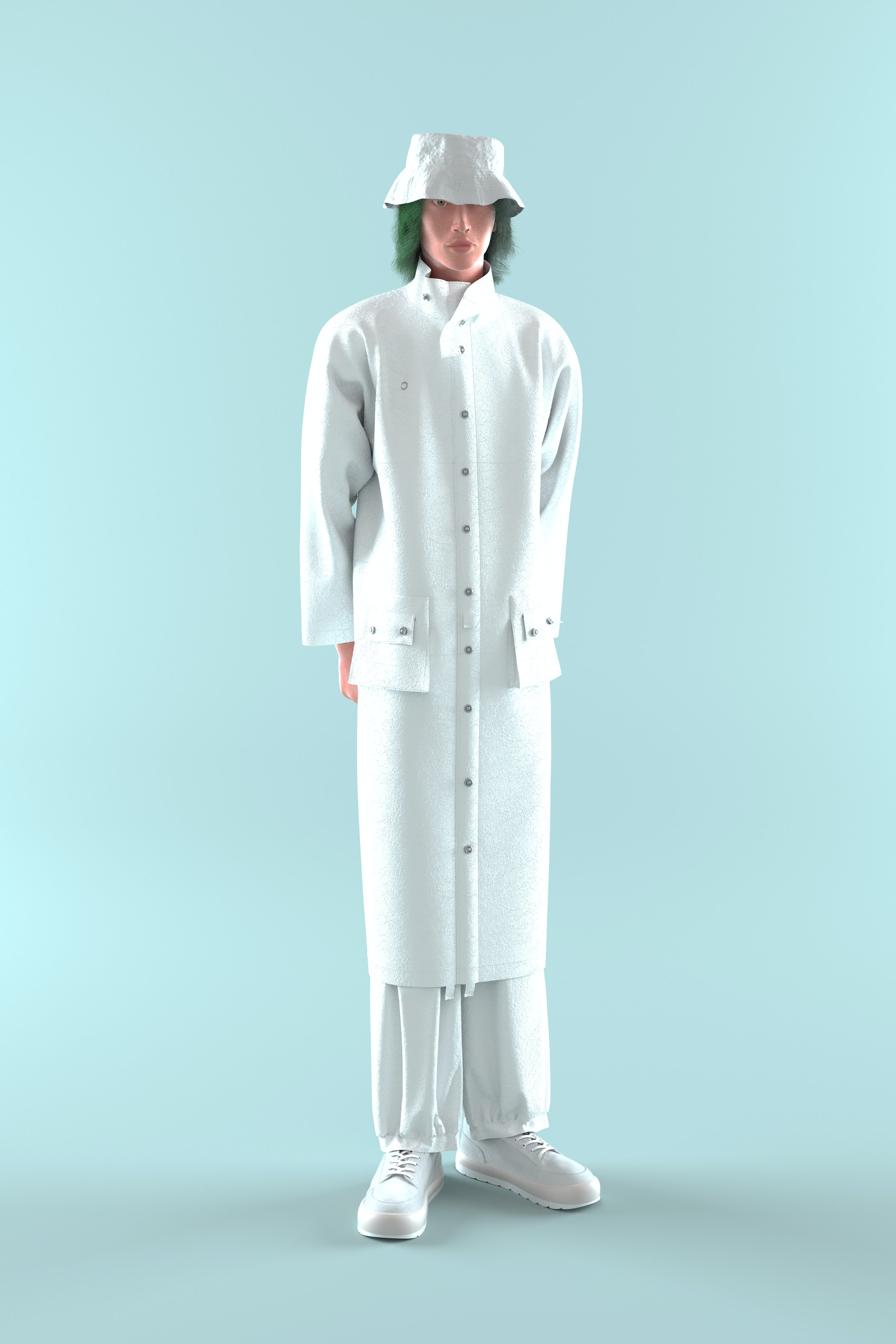 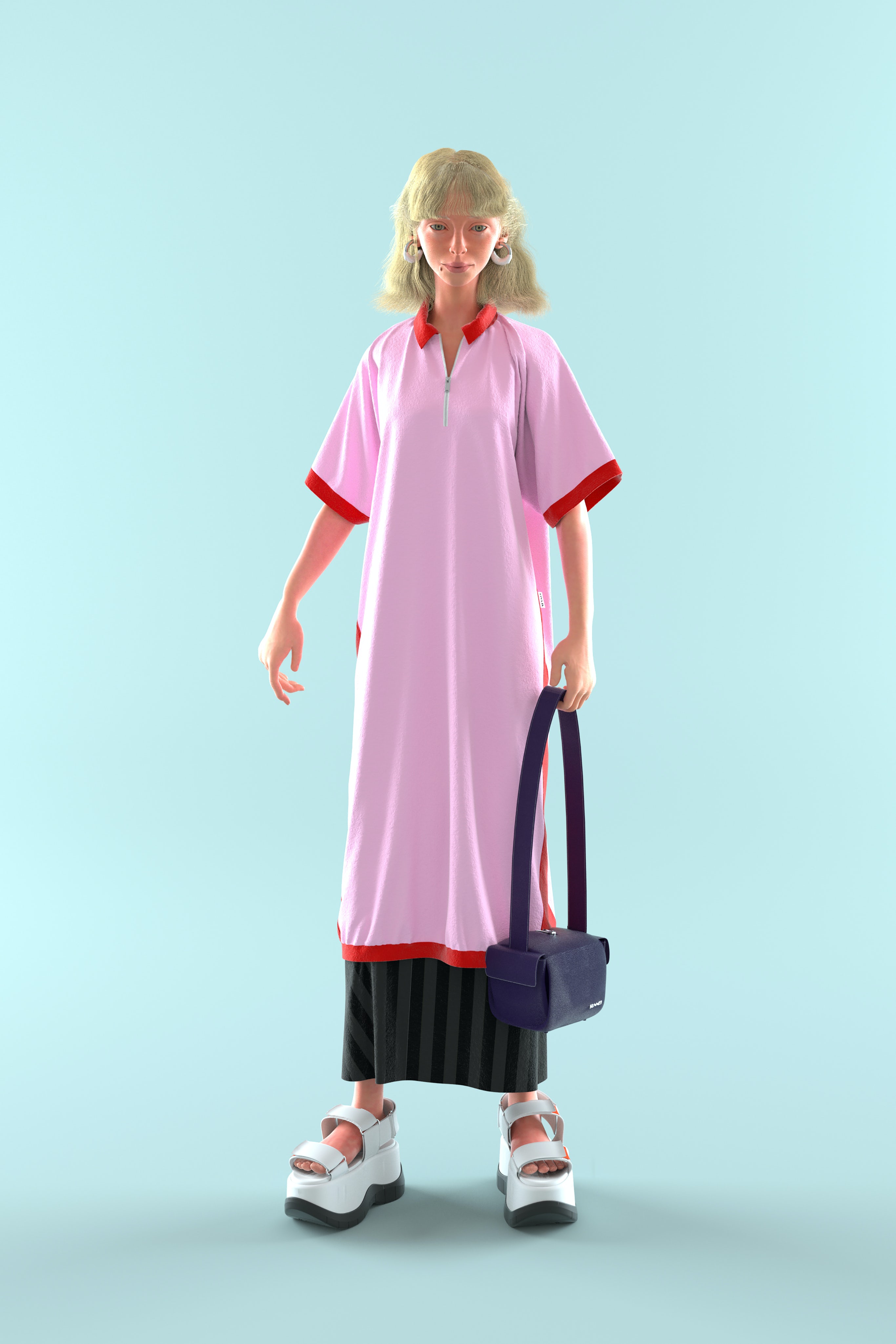 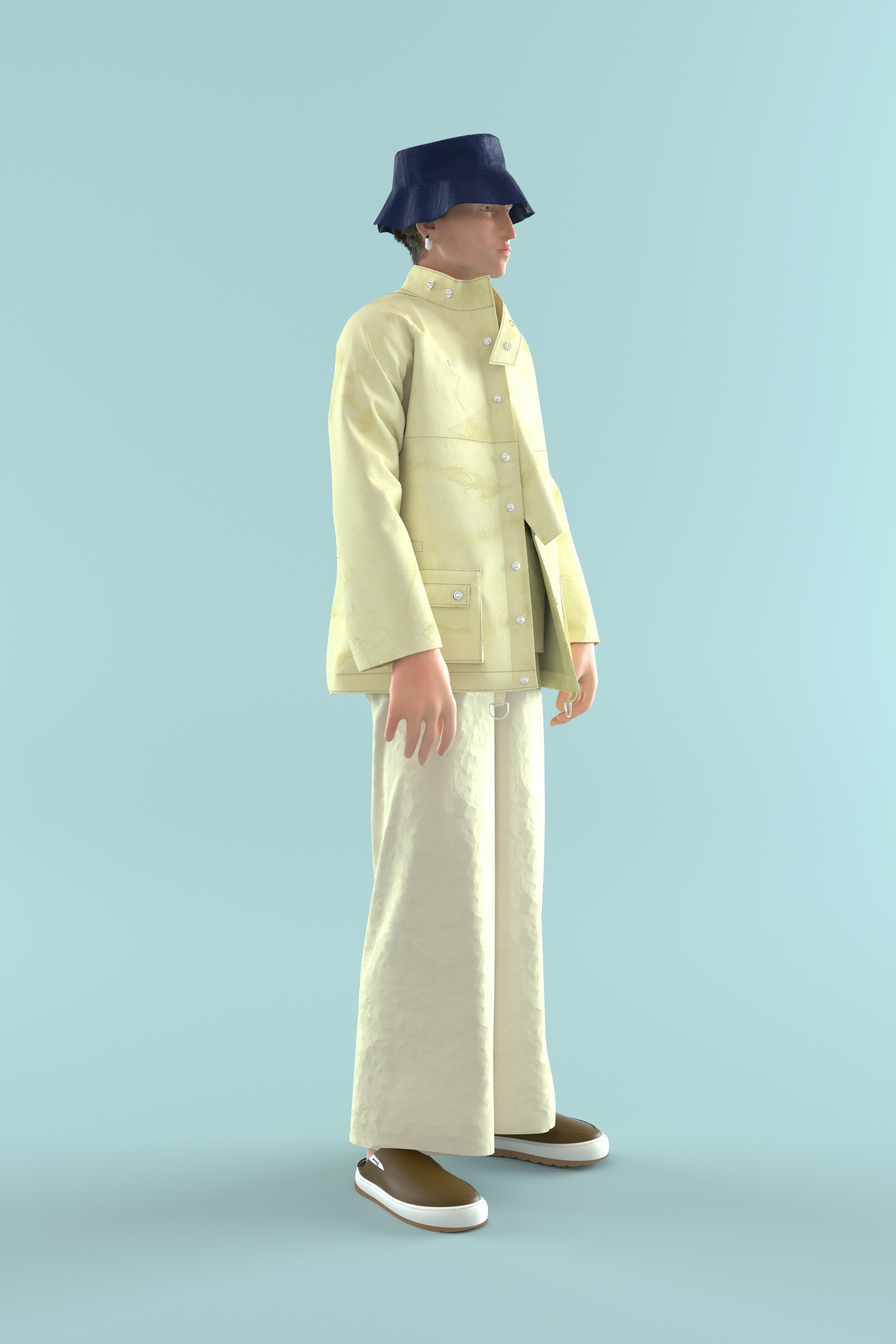 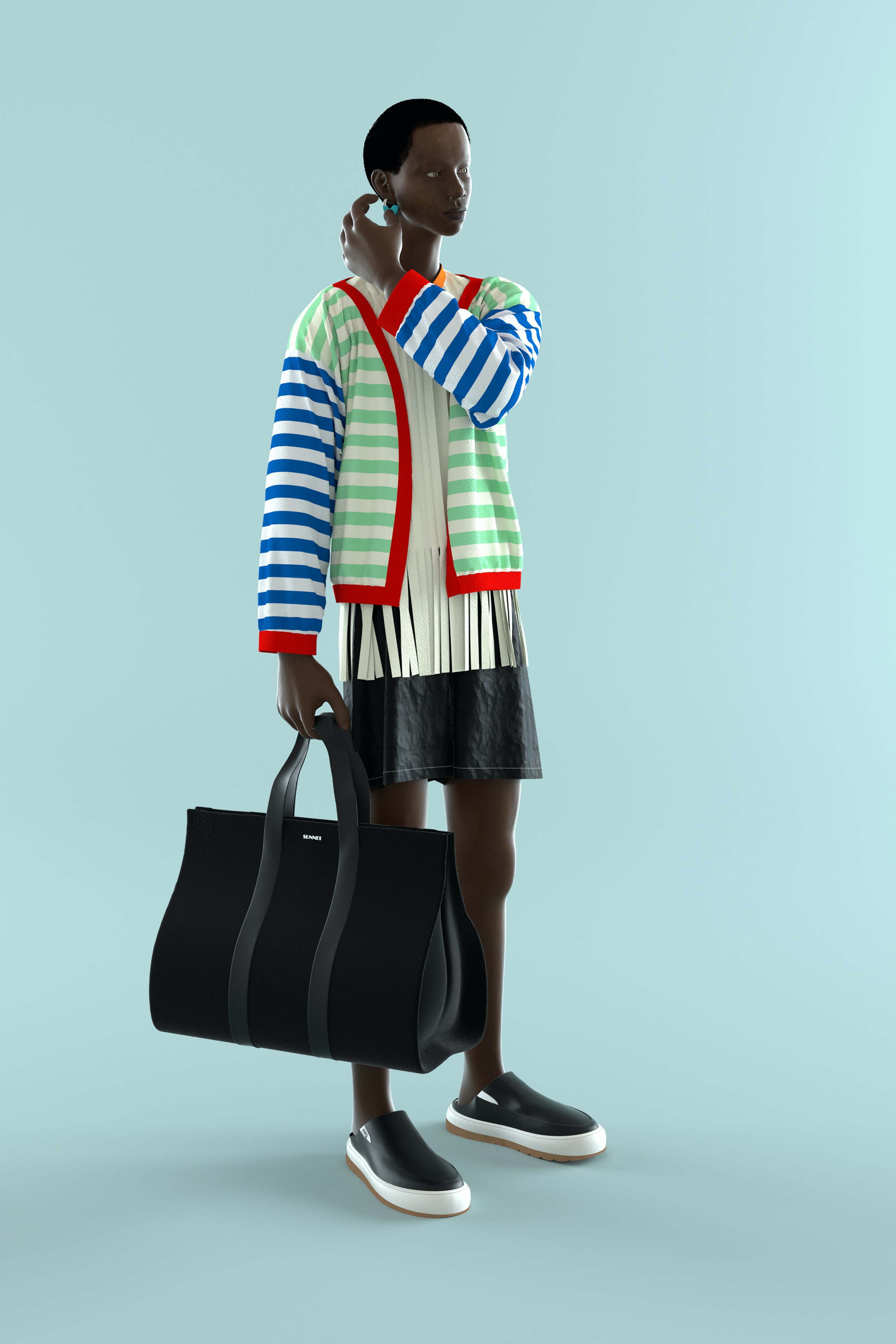 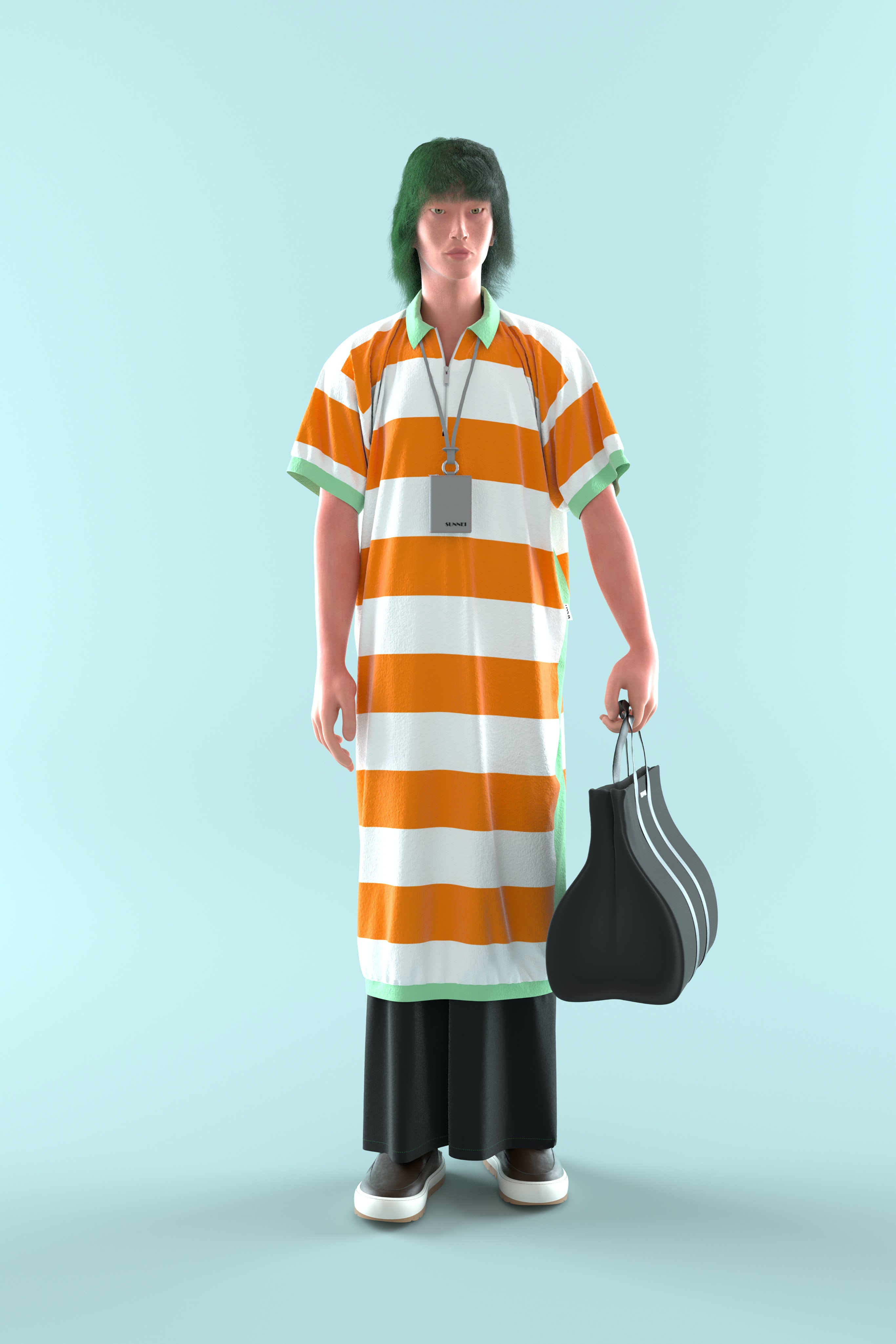 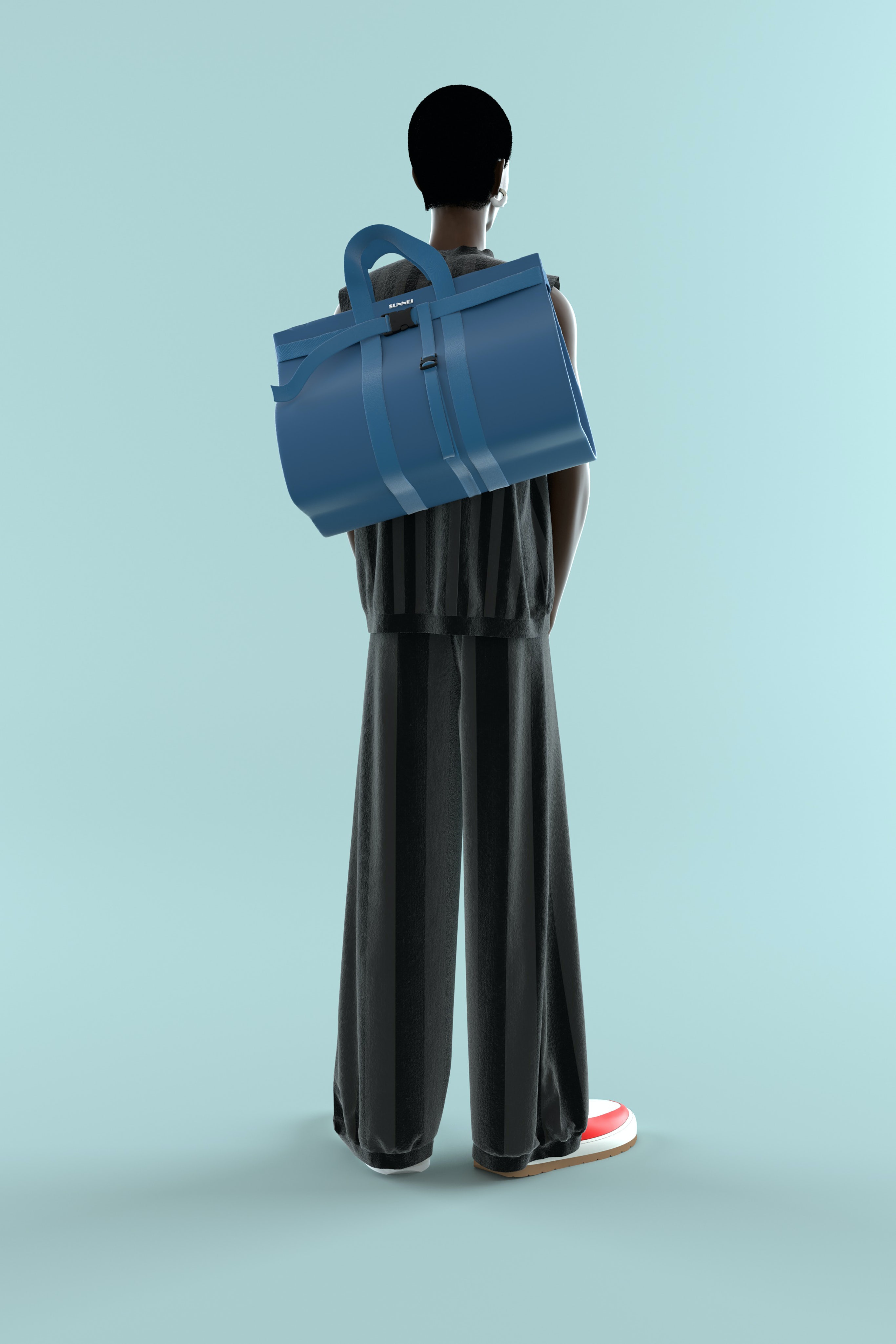