His runway audiences are stacked with celebrity friends and family members from his hometown of Longview, Texas. His 300,000 Instagram followers track his emotional ups and downs as he preps for the show, which he stages in spots off the beaten path: a trendy restaurant one season, an upper floor of a skyscraper the next. As for the official New York Fashion Week venue at Spring Studios? Never given it much thought, he told BoF.

“I’m not dead set on big, long runways, big lights, all of that. I prefer dimmer lights, a tiny runway, sitting together, drinking, eating and having a good time,” he said. “If we didn’t do a big show I’d probably do it in my living room.” 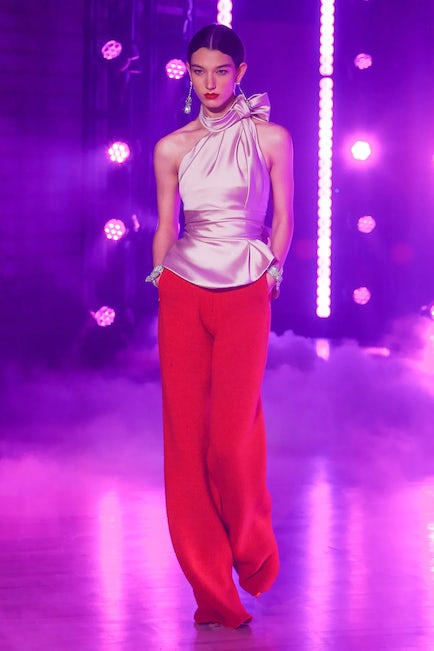 Designers like Maxwell present both a challenge and an opportunity for Endeavor, the talent and event management giant known until last year as WME-IMG. The firm represents prominent designers — Maxwell signed with IMG about a year ago — models, actors and sports stars, and operates or supports major fashion weeks in New York, London and other cities around the world.

But though IMG can now draw on unprecedented scale each February and September, the days when designers lined up to show in the firm’s tents in New York’s Bryant Park are long gone. About one-third of the roughly 100 shows on the official calendar are expected to take place at Spring Studios or Industria, two IMG-run venues. The rest, including former Bryant Park anchors Calvin Klein, Marc Jacobs and Ralph Lauren, have fanned out across the city, looking for spaces that speak to them — and will yield the biggest marketing bump on social media. Some, including Alexander Wang, have left the traditional February-September calendar entirely.

In May, Endeavor appointed IMG Models president Ivan Bart to also head its fashion events and tasked him with coming up with a formula to regain its grip on New York Fashion Week, still the American fashion industry’s biggest showcase.

In an interview, Bart laid out his underlying strategy: insert IMG into the fashion week conversation, wherever designers happen to be showing. That means ensuring Spring Studios hosts plenty of shows (handing the rooftop terrace over to Oscar de la Renta was an early coup), but also an exhibit displaying the photography of Shaniqwa Jarvis and panel discussions featuring talents like Rebecca Minkoff and Tyler Mitchell. For off-site shows, IMG is providing support ranging from lining up sponsors to full-scale production.

In other words, while the big tent may have folded, IMG still wants to run the circus.

“The excitement of fashion week is that it’s an event — and I think events are alive and well,” Bart said. “We’re in the birth of the event and the Instagrammable moment. Designers are thinking about how [to] take that event opportunity and make the most of it. We’re in the business of listening to that and trying to offer opportunities to all kinds of designers with all kinds of ways of showing.”

Bart’s approach is an extension of a vision for fashion week that IMG first laid out in 2015, in the wake of its 2013 acquisition by WME. Want A-list celebrities seated in the front row? Sponsors to bankroll a show? A ready-to-go runway in a prime location? The agency has it all.

“We’re helping designers in their needs, whether it’s sponsorship, production, casting, or the venue itself,” he said. “That’s where we’re going to go with the future of fashion events.”

If you ran a fashion show and there’s no social media did it actually happen?

Maxwell, for example, said his approach to planning his September 8 show at the Classic Car Club, which will evoke the Marfa, Texas setting where he designed his collection, hadn’t changed now that he’d signed with IMG. However, when the designer was looking to line up a sponsor, his first outside of hair and makeup, he said IMG came through. Maxwell is partnering with Kia Motors through the spring, with the auto manufacturer donating to the Marfa school system on the designer's behalf.

“That community [in Marfa] gave me so much for this show … I left with a sense of responsibility to give back,” he said. “The next morning I called everyone at IMG and said these are the things I’d like to deliver for these people.”

IMG’s strategy aims to dazzle designers whose priorities over the last decade have shifted from impressing editors and buyers to engaging a global audience online. It’s a trend that’s sure to accelerate this year. The number of invites sent to social media influencers for the Spring/Summer 2019 shows has more than doubled from last year, according to Launchmetrics, the company that runs the fashion week RSVP system Fashion GPS.

“If you ran a fashion show and there’s no social media did it actually happen?” said Amy Smilovic, founder of the contemporary brand Tibi, which has shown at New York Fashion Week for over a decade. “The consumer is really learning about new things through social media, so if you don’t have a runway show and a place to at one point collect all those visuals to live in perpetuity online, then to me that would be a huge miss.”

The problem for IMG is that while buyers and editors appreciate not having to crisscross Manhattan between shows, a runway aimed at the Instagram audience can take place anywhere. Smilovic said when Tibi first held shows, a key selling point of a central hub like Bryant Park was to connect with a critical mass of buyers. But with shows now taking place all over the city and buyers doing most of their purchasing in showrooms or online (about 80 percent of their budgets are spent on pre-collections) that’s not necessarily the case anymore.

Bart said IMG is “committed to Spring,” and he’s drawing from across the Endeavor empire and beyond to ensure the space remains the centrepiece of the firm’s fashion week plans. In addition to the shows, IMG is using the space to host panels and speakers, part of wider effort to put the company’s stamp on the conversation happening around fashion week. Programming ranges from a conversation between female founders moderated by Endeavor chief marketing officer Bozoma Saint John to a dissection of successful collaborations featuring IMG client Dapper Dan and Stadium Goods founder John McPheters.

While the big tent may have folded, IMG still wants to run the circus.

Bart, who has held leadership roles with IMG Models since 1994, said the welfare of runway talent is a priority as well, particularly in the wake of sexual assault allegations against prominent creatives earlier this year. Private dressing rooms are being set up backstage, mandatory for under-18 models and available on request for others. A models-only area will be set up for the long hours of down time before a show and IMG is providing noise-canceling headphones and free meditation apps as part of a broader effort to improve models’ wellbeing.

“If you have a 6am call time and the show is at 10 and you’re waiting for the superstar models to arrive, what do they do?” Bart said. “It’s an alternative to going outside to smoke cigarettes.”

Bart said he’s only just begun planning for future fashion weeks, but said more events outside the February-September calendar are likely, and that he’d like IMG to help raise American designers’ profiles by featuring them in events overseas. Because ultimately, IMG’s success is tied to that of the American fashion industry, he said.