The 2000s brand known for its velour tracksuits plots a comeback.

NEW YORK, United States — An iconic aughts brand is taking its comeback efforts to the next level. On February 8, Juicy Couture — purveyor of one of the era’s most distinctive status symbols, the velour tracksuit — is making its runway debut at New York Fashion Week.

A revival has been in the works since the brand’s intellectual property assets were acquired by Authentic Brands Group in 2013 from what was then known as Fifth & Pacific Companies, the public company formerly known as Liz Claiborne Inc, for $195 million. (Founders Pamela Skaist-Levy and Gela Nash-Taylor sold Juicy Couture to Liz Claiborne 10 years earlier for $53.1 million.)

At the time of ABG's acquisition, Juicy Couture had fallen out of favour after it failed to evolve past its famous velour suits, worn in their heyday by everyone from Kim Kardashian to Madonna and Jennifer Lopez to Victoria Beckham.

ABG closed all of Juicy’s US stores and partnered with discount retailer Kohl’s on an exclusive collection while focusing on the international business and licensing partnerships. The main contemporary collection was rebranded as Juicy Couture Black Label in 2015.

Meanwhile, a nostalgia for the brand started to grow as late-1990s trends and logos came back into mainstream style. By the time Vetements collaborated with the brand as part of its Spring 2017 collection, a shift in perception was already underway. 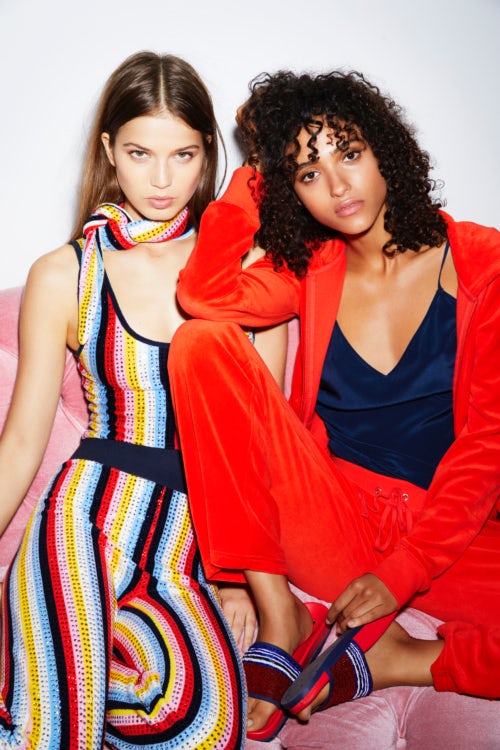 Juicy’s first New York runway show marks a new chapter in its marketing, as it aims to establish the tracksuit as a brand staple while building beyond it. In September 2017, the brand held a presentation to mark the first collection under new creative director Jamie Mizrahi, a Hollywood stylist who counts Katy Perry and Riley Keough as clients.

“Juicy Couture is synonymous with the tracksuit, an association that is a great source of pride for us,” Mizrahi says. “That said, as a global brand it’s important that consumers know we offer so much more.” Since the stylist started working with Juicy, its signature tracksuit has been spotted on Rihanna, Kylie Jenner, Selena Gomez, Lady Gaga and others on Instagram.

“We have enlisted literally hundreds of influencers from around the world to tell the new story of Juicy through their personal experiences – how they wear it, how they style it, how they make Juicy their own,” says Natasha Fishman, executive vice president of marketing at ABG. “Jamie has enlisted a unique approach to design where she has tapped into the Juicy archives modernizing design elements that made Juicy Couture so iconic.”

The runway show will feature pieces from Juicy Couture Black Label, which in addition to the more casual Juicy by Juicy Couture line — available at Topshop, ASOS and other retailers — is available JuicyCouture.com and the brand's dedicated stores outside of the US.

The Rise and Fall of Juicy Couture