Despite rising Covid-19 cases, smaller labels in the British capital are betting that in-person shows and appointments will help to deliver much-needed orders from wholesale buyers.

Despite rising Covid-19 cases, smaller labels in the British capital are betting that in-person shows and appointments will help to deliver much-needed orders from wholesale buyers.

LONDON, United Kingdom — As Selfridges’ buying and merchandising director, Sebastian Manes is no stranger to the whirlwind of a typical fashion month circuit.

But his schedule this fall bears little resemblance to the itineraries of fashion weeks past, jam-packed with flights, shows, parties and buying appointments in London, Paris and Milan. Save for a small social media team, the British department store won’t be sending out representatives to scope out new collections. Manes was planning on physically attending only one event — an intimate salon presentation by Victoria Beckham on September 20 — but the brand has since scaled back its plans and will only host a few in-person appointments.

Similarly, MatchesFashion's Fashion and Buying Director Natalie Kingham doesn't have any plans to travel and will be conducting most appointments through Zoom, she told BoF. Looking ahead, the e-tailer, which hosted events at locations from its townhouse on Carlos Place to Freize Art Fair in recent years, will be focusing on maintaining relationships digitally or through private appointments.

The absence of Manes, Kingham and other top buyers poses a critical, even existential, challenge for London’s designer labels, a band of mostly small, wholesale dependent businesses. On top of the retail gloom brought on by months of coronavirus-related restrictions, the industry is also contending with the mounting prospect of a hard Brexit and potentially punitive new trading terms.

“The global pandemic has left the fashion industry in a state of emergency,” said Caroline Rush, chief executive of the British Fashion Council (BFC), pointing to supply chain disruptions, factory and store closures, order cancellations and a general decline in demand. “The predominantly digital calendar has... forced our designer brands, especially the emerging ones, to come up with new creative solutions to present their vision.”

Whether you’re big or small, the winter will be long and eventful.

In New York, the past week has seen only a few brands, like Jason Wu, attempt traditional showcases. Earlier this year, digital efforts by Hermès to Valentino failed to make the same impact and the stakes for smaller brands are higher than ever: without new orders, many London labels may not survive the next fashion cycle.

“Sadly, whether you’re big or small, the winter will be long and eventful,” Manes told BoF. “I think we’ll see more businesses close their doors.”

In a pivotal season, London’s independent brands are looking at creative ways to entice and excite crucial clients, in spite of tightening restrictions.

The designer has seen sales tumble 30 percent because of the pandemic. He’s furloughed staff and already tightened budgets, slashed the size of his collection in half and shifted resources to digital initiatives, but he’s still betting on a physical show to see him through. While digital sales have surged this year, his direct-to-consumer channel is nascent. The showcases later this week will help generate content for social media to boost online engagement and, he hopes, draw in traditional wholesale customers.

The fashion show experience will be anything but traditional.

It’s a bold bet at a time when the fashion show experience will be anything but traditional. The BFC confirmed on September 10 that England’s six-person rule, which restrict gatherings of more than six people, will not apply to fashion shows, but shows will still need to comply with the government’s Performance Arts guidelines. Among other things, audience members will need to sit 2 metres apart. Attendees will be limited — like Manes and Kingham, many big-name buyers aren’t planning on attending at all.

Each of Choi’s three 20-minute showcases will welcome up to 15 guests. Models and staff will have their temperatures checked; for staff and guests, masks will be mandatory and hand sanitiser will be available. “It might be quite brave but crazy at the same time,” Choi said.

Besides Choi, Bora Aksu, Mark Fast and Pronounce are counting on in-person shows for an engagement boost, while Bethany Williams will host an exhibition at Somerset House. Menswear brand Paria/ Farzaneh will host a mysterious immersive experience in Amersham, a market town in the Chiltern hills roughly 40 minutes from London by train, on September 20, hoping to impress a select group of key press and buyers.

Some designers are opting out altogether, instead using the time to rethink their business models. Rejina Pyo, who will not be presenting a collection or hosting appointments this season, is in the process of altering the way she shows and sells collections to buyers and customers. Pyo won't be releasing visuals for Spring/Summer 2021 until next year and will pivot to a 'See Now, Buy Now' model. "We have the opportunity to create a buzz around product that is immediately available to the end customer," she said.

For others, plans for the week have been a moving target as coronavirus cases in the UK mounted and nerves rose. Like Victoria Beckham, Molly Goddard set its sights on a physical show format but scaled back to appointments. “Given the updated regulations it felt appropriate to switch approach,” Tessa Griffith, managing director at Molly Goddard wrote in an email.

Others are hoping old-school in-person appointments will both meet coronavirus regulations and do the trick for buyers, perhaps even enticing more cautious individuals than group gatherings. Persuading the right people to attend could be make or break for many of London’s independent labels, who aren’t established enough to rely on guaranteed repeat custom, particularly in the current climate.

“We’re not a brand people have been buying for ten years, we don’t have classic shapes that we cut over and over again,” said Halpern designer Michael Halpern. “It’s important for [buyers] to understand what the collection looks, feels, wears like every season because we don’t do all the same shapes all the time.” 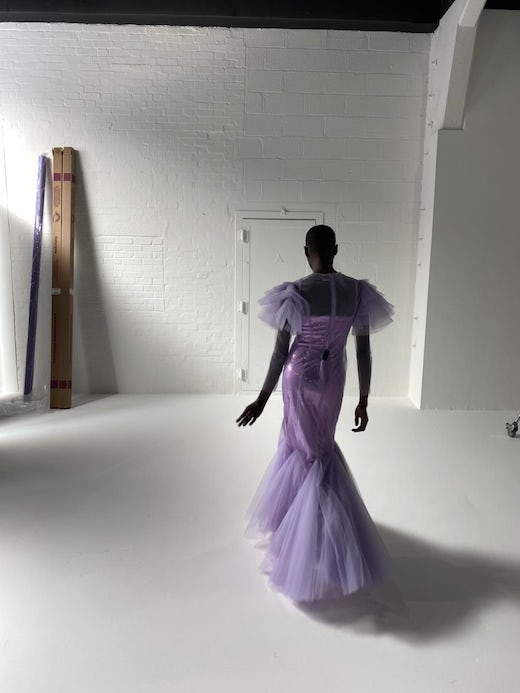 Behind the scenes at Huishan Zhang's studio | Source: Courtesy

Halpern made the call a while back not to host a physical show, but appointments will allow buyers to see and touch his eveningwear in person. For buyers unable to attend, Halpern is counting on detailed 360° shots of pieces and fabric books to boost confidence in the collection — he harnessed these tools in June and received positive feedback.

Huishan Zhang — another London-based brand known for its eveningwear — is taking a similar view. Its eponymous designer is currently in Qingdao, China, but his new collection will be on show for buyers and press at the brand’s Mount Street store. “The more buyers see, the [more] they’re going to order,” said Zhang, noting that physical meetings are crucial for new clients to appreciate the collection’s craftsmanship, while also providing valuable time to catch-up with existing retail partners. Others planning to offer appointments include Preen by Thornton Bregazzi, Roksanda and Simone Rocha.

It’s going to be a critical, brutal season that tests all the decisions brands have made since the global crisis began. How buyers respond to new collections and activations may prove a make or break for many.

“Brands that have made the right decisions... they will be the brands of the future,” said Manes, referring to transparency and supply chain optimisation in particular. “Until then, it’s pure survival mode for everybody.”

Many are hedging themselves with strategic business decisions that are likely to shift their reliance on fashion week in the long term. Like Choi, Zhang has reduced the size of his current collection; the brand is also planning a major project to target the Chinese market and expanding its range to include day-time looks. The designer is also counting on the store environment as an asset. “Giving [buyers] a shop environment can help them imagine the merchandise and help them place buys.”

Giving buyers a shop environment can help them imagine the merchandise and help them place buys.

Like Choi, Farzaneh has used time during lockdown to amp up her direct-to-consumer channels. “Our audience is already much more involved with us directly and it cuts out the middle man” she said. The brand also began posting films from her native Iran to its platform as a way to engage with its community on a cultural level. While Halpern hasn’t made the DTC leap, demand for bespoke orders has stayed strong despite the pandemic, which is helping with cash flow.

Will as many brands be left standing at the end of the season? Rush is optimistic. Whereas June’s schedule centred on branding over clothes — designers pivoted to talks, or published zines instead — this season will see the focus shift back to actual product, which she hopes will facilitate the process for buyers. “I am hopeful that our industry will recover, as British fashion is known for its resilience.”

Independent American Fashion Businesses Are Unravelling. The Government Must Help.