Despite all eyes being on Riccardo Tisci’s over-shadowing debut as creative director of Burberry along with the homecoming of Victoria Beckham, who is celebrating her brand’s 10-year anniversary with two shows the day prior, there are plenty of young womenswear labels moving at their own pace.

The best ones among them are proving the city — which in past decades has become synonymous with non-conformist, boundary-pushing design — is just as capable of birthing some of the world’s most exciting creative talent as it once has.

New this season was a fresh outlook on commerciality, which was a common thread running throughout the collections of this season’s emerging designers. The fear among art school graduates that anything concerning business takes away from one’s artistic expression seemed to have evaporated, with the best collections balancing both. 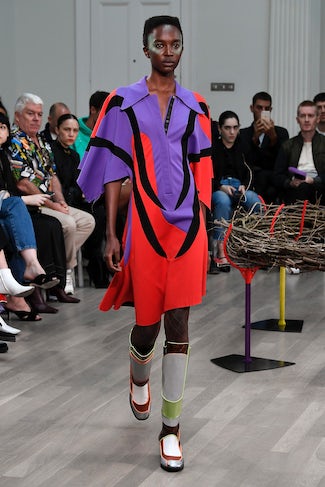 Opening the week on Friday afternoon was Bulgarian designer Kiko Kostadinov, who showed a futuristic collection at the intimate Swiss Church. Kostadinov, known for his utilitarian take on uniformed dressing, is on the brink of a breakthrough among young street-savvy shoppers who are attracted to his flashy colour-palette and heavy emphasis on technical fabrics.

Sold-out collaborations with Asics, Camper and Stüssy have added to his popularity. It is no wonder the label has grown its stockists by 40 percent between the Spring/Summer 2018 and Autumn/Winter 2018 seasons.

It testifies to Kostadinov’s willingness to expand his horizons regarding the expansion of his business. The designer has been the creative director of Mackintosh’s designer line Mackintosh 0001 since December 2016, and in January 2018 he launched radio-show-turned-streetwear-collective Affix Works, which has been an instant hit among retailers such as Mr Porter, Ssense and The Broken Arm.

His womenswear isn’t sitting still either. This season, Kostadinov appointed fellow CSM graduates, and twin sisters, Laura and Deanna Fanning — the latter being his girlfriend — to oversee the brand’s womenswear going forward, which, according to Kostadinov, will help boost overall brand awareness.

“I realised I needed to focus on one thing, because at the moment I don’t have my own personal vision for the womenswear,” said Kostadinov. “It’s exciting to treat a small brand like mine as a bigger house that has two completely different creative directors.”

For their first collection, the sisters were inspired by Aldous Huxley’s dark, dystopian book, “Brave New World” (1932). The abundance of clashing hues was a nod to the novel’s idea around clashing colours representing a sign of liberation and resistance against the establishment.

Many pieces were complimented by artisanal detailing, including mother-of-pearl shell embellishment, fastening made from horn encased in metal and hand-beaded, star-shaped bangles, each of which took the designers two days to complete. 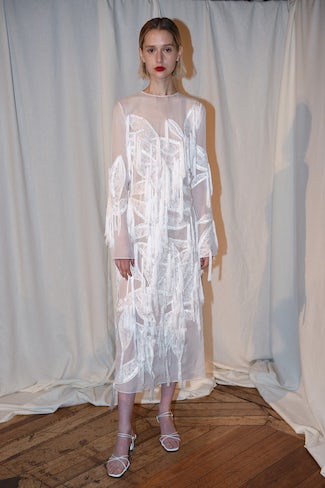 While in the past, at times, Kostadinov’s women’s line has felt at disconnect with his menswear, this time around there was a clear crossover between the genders when it came to cuts and silhouettes — unintentional, according to Kostadinov. It will certainly benefit the way the designer markets and sells his brand vision as a whole to retailers and press.

Over at Xu Zhi, founder Chen Xuzhi — a fellow Central Saint Martins graduate — showed his most wearable collection to date, without losing its minimal red-carpet appeal. He took inspiration from famed American poet Emily Dickinson, who only found fame after her death in 1886.

Dickinson never wed — a highly unusual occurrence at the time — but it was her dedication, inner strength and her sense for romanticism that drew the Chinese designer to the cult figure.

For his latest collection, Xuzhi created eight pairs of looks, each duo featuring an all-white variation, the other rendered in colour. According to the designer “Dickinson only ever wore white, inspired by the death of her father.” The presentation’s neo-Gothic location, “Two Temple Place” complimented the narrative well.

Xuzhi’s hand-work was ever-present and was showcased through a fringed car coat, floral-embroidered suiting in pastel hues — a gentle nod to Dickinson’s love for plants — and a hand-stitched tulle trench, all of which will be available in China straight after the show via a partnership with JD.com.

“I love to design clothes and tell stories but keeping teams in Shanghai and London sustained takes more than just [creative] expression,” he said. “Striking a balance between business and art is what I’m trying to learn.”

By putting a strong emphasis on both, it’s no wonder that ever since founding his label in 2015, Xuzhi has become one of the most sought-after Chinese designers. His latest collection certainly cemented him as one to watch. 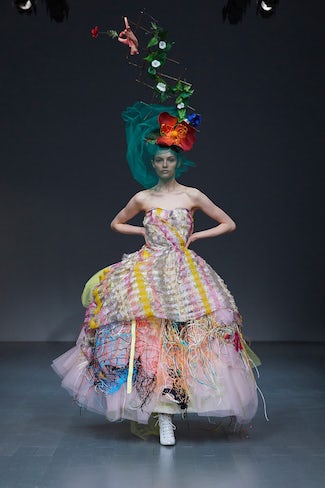 Later in the day, Matty Bovan — yet another CSM graduate — showed his fifth collection at 180 the Strand. Whereas in past seasons, Bovan’s eclectic DIY aesthetic hinged towards the cut-and-paste, his first solo show in February — following three seasons under Lulu Kennedy’s Fashion East platform — was a breakthrough collection for the designer.

It’s been a big year for Bovan. In December 2017, the 28-year-old, York-based designer was nominated for the British Emerging Womenswear Talent award at the Fashion Awards. More recently he was named a recipient of this year’s BFC Newgen bursary, supporting his Spring/Summer 2019 and Autumn/Winter 2019 shows.

This time around, with the returning help of creative consultant Katie Grand and milliner Stephen Jones, Bovan delved deep into the art of English artist and film-maker, Derek Jarman, whose experimental work presented itself on the runway via fictional characters from far away alternate universes.

Models sported pastel-coloured, beehive hairdos and buzz cuts, and wore volumised tulle ball-gowns fastened by corsets and decorated by hand-crocheted flowers and multi-coloured plastic cable-ties. There were also plenty of cellophane-treated, fuzzy yarns and head pieces made out of dusters, garden gloves and kitchen gear, as if sourced from a futuristic wasteland.

“As a designer it’s my job to push taste-levels and to think about what [consumers] actually want and what’s interesting and what’s not,” said Boven. “Otherwise there’s no point of showing it.”

Hidden deep within the avant-garde show-pieces were many more wearable, gems, including digitally-printed, lycra tops, graphic knitwear and miniature and oversized neon-trimmed bags made in collaboration with Coach, which are guaranteed to be a hit on shopping floors.

“I’m interested in that,” he said, about adding more commercial pieces to the mix. “But it has to be unique, because I love the fantasy as well.”

London’s Next Gen Brands Have Arrived

In the Aesthetics Blender